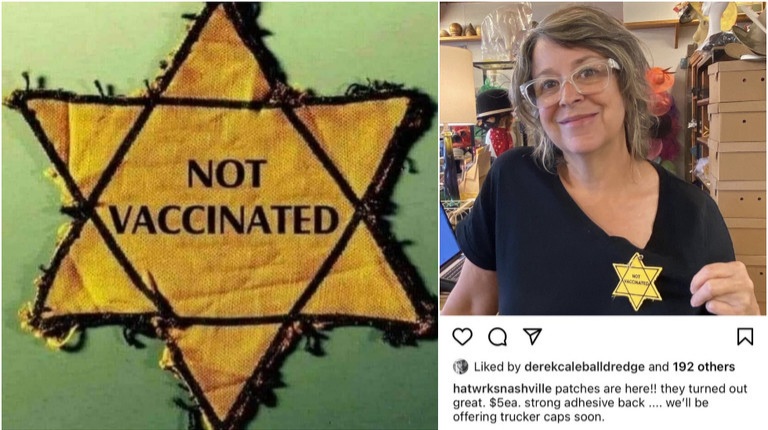 A hat shop in Nashville, Tennessee is taking heat after unveiling an anti-vaccine patch modeled on the yellow star forced on Jews during the Holocaust, with observers online rejecting the comparison as wildly offensive.

The store, hatWRKS, took to Instagram on Friday to promote the new item, which carries the words “Not vaccinated” and is designed around the Nazis’ infamous ‘Juden’ star, perhaps one of the most widely known symbols of the Holocaust.

While the post has since been deleted, screenshots quickly made the rounds online, prompting a torrent of condemnation for the shop and its owner, Gigi Gaskins, who was apparently featured in the Instagram missive sporting the yellow patch. Some even called for a boycott.

“My grandparents’ entire families were killed in the Holocaust. Their bodies incinerated. That’s NOTHING like COVID precautions,” said one outraged commenter.

This horrific person is Gigi Gaskins.

She believes that selling Stars of David with “Not Vaccinated” is somehow entertaining.

While it is her right, it’s also our right to express our disdain pic.twitter.com/oMo85uoMgP

On Gaskins’ personal Facebook page, an image of one of the patches remained live as of Friday night – though the store owner appeared to have swapped out the photo for another profile picture after reports on the hot-button item began to circulate.

Hitting back at critics, the hatWRKS Instagram page posted a follow-up later on Friday, saying “People are so outraged by my post… but are you outraged with the tyranny the world is experiencing?” – presumably referring to government restrictions imposed through the Covid-19 pandemic.

I pay much more respect to history by standing up with the fallen than offering silence & compliance.

Activists have used the Star of David badge as an anti-vaccine symbol since well before the Covid-19 outbreak, repeatedly drawing condemnation from Jewish and Holocaust memorial groups. The fad has carried on more recently as well, with anti-lockdown protesters in London seen wearing the yellow stars just last month.

“Marjorie is wrong, and her intentional decision to compare the horrors of the Holocaust with wearing masks is appalling,” he said in a statement.

Noticing the growing trend, the Unired States Holocaust Memorial Museum issued an open letter on Friday, urging Americans to stop making the comparison. It read: “We also watch with great dismay a persistent and increasing tendency in American public life to invoke the Holocaust for the purpose of promoting another agenda.”

It is deeply painful for us to see our personal history – the systematic destruction of our families and communities and murder of six million Jewish men, women, and children – exploited in this way.