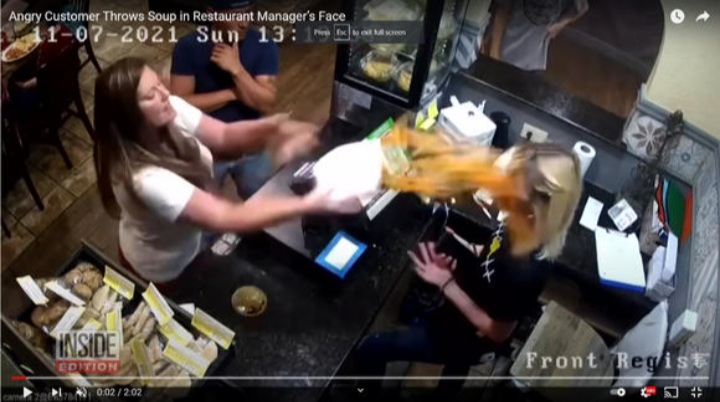 This is what it looks like when a product complaint is taken way too far.

Just about every person has been part of a bad customer experience, whether on the customer or management side. That said, regardless of what happened, there’s a wrong way and a right way to handle things.

There’s a well-known saying of “the customer’s always right”. This can be a controversial phrase, but most anyone who has previously or been currently working in customer service will happily say that this saying is totally bogus.

And frankly? The following viral video is the perfect example of why the customer is indeed not always right.

A Texas argument gets too spicy.

The incident took place on November 7th in Temple, Texas, at a Mexican chain restaurant called Sol de Jalisco. An angry Texan took “unsatisfied with the service” to a whole new level of inappropriate and insane.

In a recent viral video, surveillance footage caught the interaction all on tape. The customer walks up to the cashier’s desk and pops down a cup of take-out soup. The restaurant manager, Jannelle Broland, was the person who took on the irate customer. Broland explained that the plastic top on the soup had been melted, and the customer was extremely angry about it.

Broland understood her frustration, and offered a full refund, or to get her a new cup of soup. The customer refused any of the options and simply continued screaming in the restaurant manager’s face.

Surely, there was a reasonable way to reach a conclusion that everyone could be happy with?

Attack of the Mexican soup.

No one could have imagined what happened next — but we don’t need to believe it, we can see it all on tape.

In a shocking chain of events, the irate customer picks up the soup and, in one fell swoop, toss the soup directly in the face of the restaurant manager. The customer and her plus two then quickly sprint out of the restaurant as the manager stands in shock, covered in Sol de Jalisco’s Spicy Spicy Mexican Menudo soup.

Inside Edition caught up with the restaurant manager, Jannelle Broland, to talk to her about the incident. She confirmed that she has no significant injuries following the event.

She also shared her experience on TikTok in her own video, explained that the soup was only lukewarm, however, being as it was a “Spicy Spicy Mexican Menudo” soup, the spices were what caused the biggest problem.

“I remember feeling the warmth of the soup, but my eyes burned so bad. My nose was burning. It kind of, kind of took my breath away for a second because just the burning, I was really in shock from it all.”

Broland also states that she is traumatized after the event, which is completely understandable.

The video clip of the attack shows the assailant and her accomplice sprinting from the restaurant. That said, it doesn’t mean the soup attacker got away.

Reports state that the woman has been identified, and some are even saying that the assailant is a nurse who works at a Temple hospital. A police complaint has been filed, and it’s only a matter of time until the irate soup attacker receives charges. There’s no arguing with video evidence of the incident.