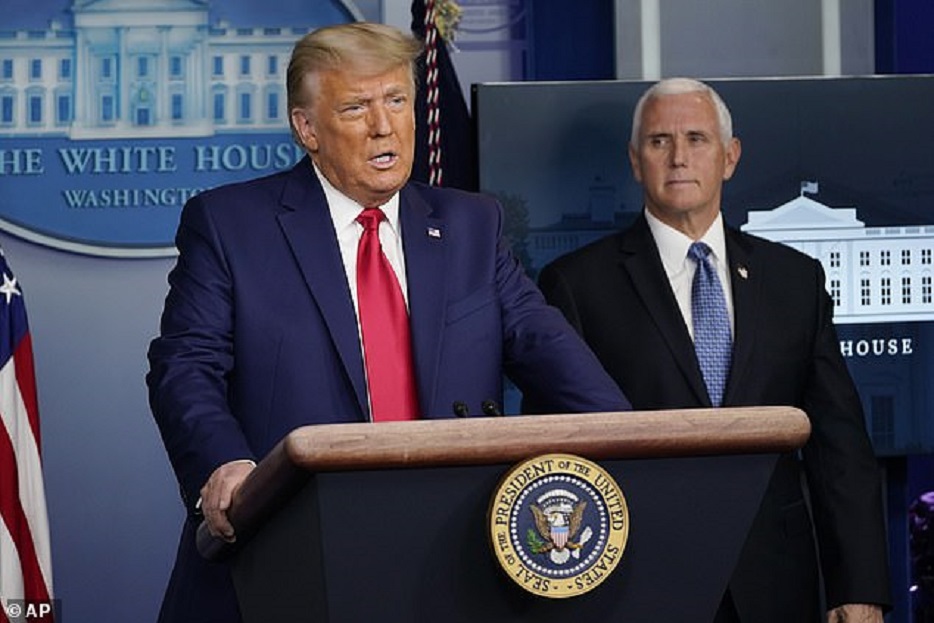 Reporters in the White House press corps were left mystified by Donald Trump’s 60-second appearance in the briefing room on Tuesday, with one remarking as he left: ‘That was weird as s***’.

The president summoned the press for a briefing, and strode onto the stage at 12:31pm. By 12:32pm the event had concluded, according to the official transcript.

It was called shortly before Joe Biden took to the stage to unveil senior members of his team, including his Secretary of State, National Security Adviser and UN ambassador. Many felt that the president was determined to tout his own accomplishments, before Biden was allowed to proceed with his.

Trump said he wanted to thank the American people for working so hard to push the Dow Jones to over 30,000 points – a new record.

‘We’ve never broken 30,000. And that’s despite everything that’s taken place with the pandemic,’ said Trump.

‘I’m very thrilled with what’s happened on the vaccine front. That’s been absolutely incredible. It’s – nothing like that has ever happened medically. And I think people are acknowledging that, and it’s having a big effect.’

He then switched back to Wall Street, saying that the value of the share was a ‘sacred number’.

Many analysts believe the stock market is performing well as a result of encouraging news about a COVID vaccine, and amid expectations that Biden will lead a less chaotic White House.

‘That’s the ninth time since the beginning of 2020, and it’s the 48th time that we’ve broken records in – during the Trump administration. And I just want to congratulate all the people within the administration that worked so hard.

‘And most importantly, I want to congratulate the people of our country, because there are no people like you.’

The president then turned and walked off without taking questions, saying: ‘Thank you very much, everybody. Thank you.’

Reporters were left startled by the brief statement and hasty exit.

‘Well, that was weird as s***,’ said one, caught on the microphones in the room.

Another said it was ‘one of the stranger’ briefings he had attended.

The president has kept the media at arms-length since the November 3 election, not taking any questions and instead letting his lawyer Rudy Giuliani fight his battles with the press.

On Monday night the General Services Administration (GSA) officially recognized the Biden transition team, edging the president closer towards admitting defeat – although he has still not officially conceded, and may not.