The act of madness and strategic suicide in the USA: Why is the cooperation between Moscow and Beijing a nightmare for Washington? 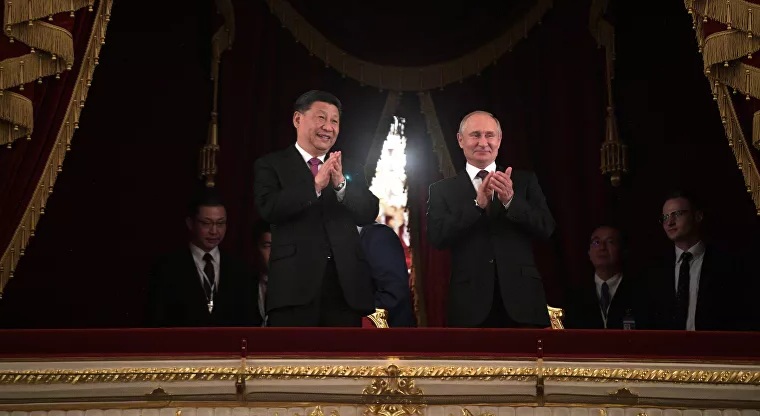 US President Joseph Biden is facing a nightmarish scenario that will have global consequences. And that is a deeper strategic cooperation between China and Russia, whose goal is to undermine the influence of the United States and prevent Biden’s attempts to gather democratic allies, warns Frederick Kemp, president of the influential Atlantic Council from Washington.

It is a think tank that brings together the most aggressive hawks of aggressive NATO policy – from Madeleine Albright to Wesley Clark, from former CIA and US intelligence directors David Petraeus and James Clapper to former US Army Commander Joseph Dunford and former NATO Secretary General. Robertson.

A key challenge for Biden

All in all, with financiers such as Facebook and Google, Twitter and Reuters, George Soros and the Rockefeller Brothers Fund, the NATO Public Diplomacy Fund and the US military-industrial complex in the form of Raytheon , “Lockheed Martin” and “Northrop Graman”, the Atlantic Council brings together informal officials of that powerful deep state  that governs both the United States and its overseas allies.

Which means that more attention should be paid when the head of their organization, Frederick Kemp, points out that Russia and China not only share intelligence but also “increasingly coordinate their actions and strategies,” and warns that this is “the most underestimated but the most significant test of Biden’s leadership “and its” key challenge “. A real American nightmare, as he assesses with a noticeable dose of uneasiness, because, “taken separately, the Chinese and Russian challenges would be more than enough for any president of the United States.” If China and Russia act even more harmoniously and thoughtfully, you will get a narrative that is more explosive than any plot in Tom Clensy’s spy novels. That is a scenario for which the United States and its allies do not have a strategy , or even a common position on it. “

The most influential bilateral relationship

To confirm his main thesis that the situation in this regard is far more serious than that observed in official and semi-official circles in Washington, Frederick Kemp points to the editorial comment of the Chinese newspaper “Global Times”, when he describes him as a “leadership spokesman in Beijing”. under the title “Sino-Russian ties are deepening, while the ties between the United States and its allies are swaying.””If America relies on its alliances to try to solve the problems caused by its outdated hegemony, then it is an act of madness,” the Chinese paper said, adding that “Washington is playing a game that will surely harm it and not bring anything good.” to his Asian allies … Let’s be honest: no country in the region can oppose China or Russia, let alone fight with both powers at the same time. It would be a disaster for any country to oppose China and Russia by forming an alliance with the United States. “

In contrast, “the most influential bilateral relationship in Eurasia is the Sino-Russian comprehensive strategic coordination partnership for the new era.” “China and Russia understand the weight of their ties,” the Global Times reports. And he announces that, with their “determination to preserve global justice in an increasingly multipolar world,” the two countries will “break the American notion of a ‘world order. ‘

On the other hand, Biden says that “America is back” and that it is ready for a confrontation with both China and Russia. But, the Wall Street Journal warns, quoting an official from the Clinton and Obama administrations, “the more you claim that you are not a declining force, the less convincing you become.”

Can America oppose China and Russia? How deep is the relationship between these two powers, and how did Washington begin to realize that it was a “nightmare scenario” for him? And what will America’s allies do if it makes them choose?

These are the issues discussed in the ” New Sputnik Order ” by Đuro Bilbija, the editor of the “Fakti” portal and the former correspondent of “Večernji novosti” from Moscow, and the professor of international relations, Dr. Srdjan Perišić.

The assessment of the leaders of the Atlantic Council about the danger that the Russian-Chinese cooperation represents for the hegemony of the USA “is one of the few of their claims with which I can agree”, notes Juro Bilbija and points out that “America made a fatal mistake when trying to encircle the former USSR , Helped China become an economic superpower . The spirit was thus released from the bottle and became too large to return to it, which America is now trying to do. At the same time, just as America needed China against the Soviet Union 50 years ago, so now China needs Russia. And Russia, for a world no longer ruled by pax Americana, needs China. And with that, the American nightmare becomes real, and it becomes java – which will become more and more nightmarish for Americans. “

“Even at the beginning of the 20th century, Great Britain expressed fear of the emergence of large land forces in the area of ​​Eurasia, which would threaten its dominance,” Srdjan Perišić points out. ” Inheriting British geopolitical dominance after World War II, the United States inherited its fears as a result of serious analysis – hence Washington’s efforts to prevent Berlin from connecting with Moscow, as well as Moscow and Beijing. That is what NATO is still serving in Europe today, and that is what American rapprochement with China served in the early 1970s. “According to Dr. Perisic, American strategists “predicted a vector of expansion to China to the north, to Siberia … However, with the arrival of Vladimir Putin to power in Russia, and the formation of the Shanghai Cooperation Organization in 2001, between Moscow and Beijing, instead of conflict, all closer relationships. And the Americans could not prevent that natural cooperation between the two huge neighbors. “

An alliance when there will be none

Moreover, they make a key strategic mistake by putting pressure on both forces at the same time, forcing them to get even closer. So the Chinese “Global Times” is confidently saying these days: “Being the enemy of both China and Russia at the same time is tantamount to strategic suicide .”

“American commentators are increasingly pointing out that Washington, even if it manages to gather the famous ‘alliance of democracies’ against Moscow and Beijing, and the growing question is whether it will be capable of that because both Berlin and Paris show that they are not in the mood to deepen the conflict. , will not be able to prevent Russia and China from, thanks to mutual cooperation and coordination, becoming the ones who will write the rules of the game in the world and determine where the red lines are. That is what Putin openly announced in his speech last week “, emphasizes Đuro Bilbija.

Srdjan Perisic concludes: “It is not without reason that in their risk assessment, American intelligence warned that Russia and China are driving wedges between the United States and their allies and partners, both in Europe and in the Asia-Pacific region.” From that, it can be inferred that there will be nothing from the creation of the only front against Moscow and Beijing that Washington wants. It is simply not in anyone’s interest, on the contrary. “