The (Heavily Redacted) Trump Search Warrant Affidavit Has Been Released 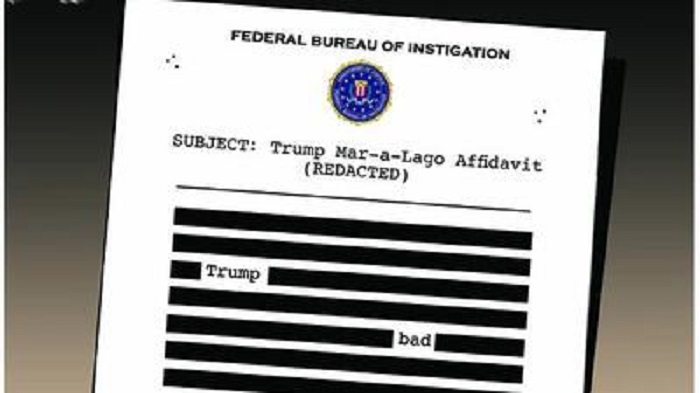 The DOJ just released the affidavit submitted in support of the search warrant of former President Trump’s Mar-a-Lago residence.

As expected, the judge allowed the Government to heavily redact the affidavit before it went public. In yesterday’s order, the judge found that parts of the affidavit must remain sealed because:

This aligns with the DOJ representations that (1) information in the affidavit “could be used to identify many, if not all” of the witnesses; (2) the affidavit would provide a “roadmap for anyone intent on obstructive the investigation.”

The contents of the boxes reviewed by the FBI

Allegations of improper storage of materials.

Details regarding the search of Trump’s office.

Some aren’t so convinced. According to The Wall Street Journal, Kash Patel, one of the foremost experts on Russiagate, has stated he didn’t know what was in the boxes taken from Mar-A-Lago by the FBI. The New York Times also has doubts about whether the documents included Russiagate materials:

None of those documents or any other materials pertaining to the Russia investigation were believed to be in the cache of documents recovered by the F.B.I. during the search of Mar-a-Lago, according to a person with knowledge of the situation.

In fact, many of the Russiagate documents declassified by Trump may already be in possession of the National Archives. According to June 2022 reporting from Politico:

Former President Donald Trump has told the National Archives to grant journalist John Solomon access to non-public administration records, according to Solomon and a spokesperson for the former president.

Solomon said Trump specifically directed the Archives to give him access to documents related to the Russia probe that were declassified in the final days of his administration. And he said the Archives have been cooperative and accommodating.

Then there’s the issue of classification. Does it matter if the documents at Mar-A-Lago were classified or unclassified?

As we stated when the warrant was released, the statutes in question do not necessarily require the documents to be classified. One of the statutes mentioned in the warrant – 18 USC § 2071 – prohibits the removal of “any record, proceeding, map, book, paper, document, or other thing, filed or deposited with any clerk or officer of any court of the United States, or in any public office. . .” Prosecution under § 2071 does not depend on the classification of the document.

The Espionage Act (18 USC § 793) is also referenced in the warrant. Over at Lawfare they guessed that “the part of the Espionage Act that is likely most relevant in this case is § 793(d).” They ended up being wrong. The affidavit cites to 793(e), which prohibits the unauthorized possession and retention of documents “relating to the national defense.”

The Espionage Act does not contain the term “classified.” And although the law’s application considers the status of classification, there’s a question of whether the documents must be classified for charges to be brought. See US v. Morison, 844 F.2d 1057, 1076 (4th Cir. 1988) (discussing the narrowing of the definition of documents “relating to the national defense” to those documents “which had been ‘closely held’ by the government and was ‘not available to the general public’”). This leads us to ask whether the government can consider a document to be “closely held” if it isn’t classified.

The affidavit answers that question, stating “information related to the national defense” has been construed broadly by the courts.

Make no mistake: the Garland DOJ would see no issue with prosecuting for the retention of unclassified documents. But maybe they don’t need to go that far, as they’re alleging the materials at Mar-a-Lago were classified. From the DOJ’s April 29, 2022 letter to Trump’s attorneys: “among the materials in the boxes are over 100 documents with classification markings, comprising more than 700 pages.” And back in May 2022, NARA stated it had “identified items marked as classified national security information, up to the level of Top Secret and including Sensitive Compartmented Information and Special Access Program materials.” And now we have the affidavit’s allegations that the materials were classified.

[ZH: Some hot takes from The Federalist‘s Sean Davis and others]