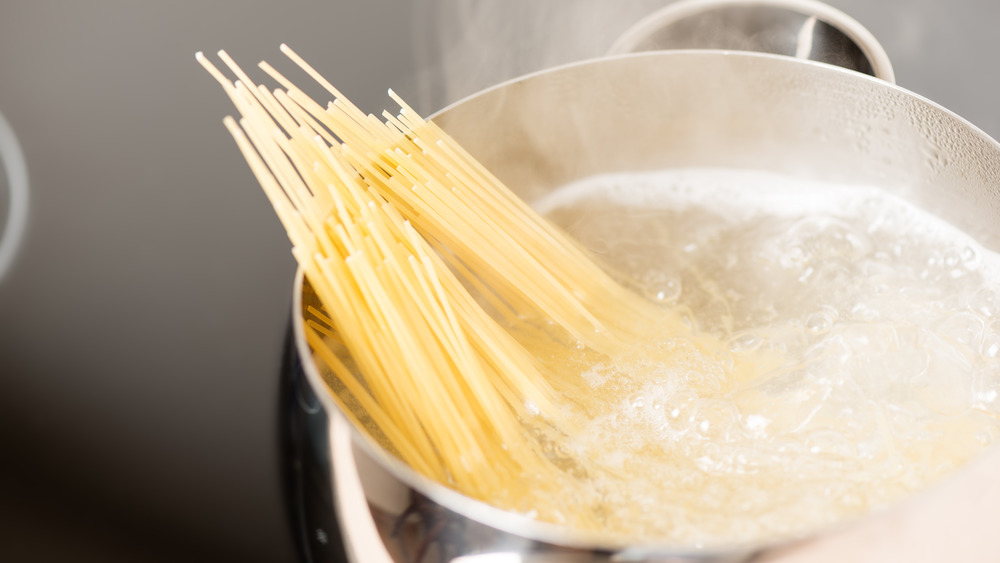 Pasta water might not be something you think about much — once your noodles are done cooking, you might just pour it into the sink without a second thought. But if you haven’t been saving your pasta water, you really should be, because you’re pouring a useful kitchen ingredient right down the drain.

According to Food Network, one good reason to save your pasta water is that it’s an essential ingredient for building pasta sauces for dishes like cacio e pepe or aglio e olio, and it helps the sauce cling to the pasta. But while you might be familiar with adding a splash of pasta water to sauce, there are other, less common reasons you should save that pasta water too.

Once you’re finished cooking pasta, instead of pouring it into a strainer, Taste of Home recommends using tongs or a pasta fork to take it out of the water so you don’t waste a single drop. Even if you’re not immediately adding it to a sauce, you can save all that good pasta water for later. Rachael Ray suggests freezing your leftover pasta water in ice cube trays, so you can pull a cube out of the freezer whenever you need one. Then, you can add them to soups or pan sauces in place of broth, or for thickening sauce on another day.

Food and Wine also suggests freezing leftover pasta water and using it in place of broth. One way you can do this is by adding it to vegetarian soups either in place of or in addition to veggie broth. You can also use pasta water for cooking beans; the extra starch in the water makes an extra yummy bean broth, especially if you’re slow-cooking the beans over several hours. According to The Kitchen, cooking dried beans in leftover pasta water helps soften their skins and season them.

Surprisingly, pasta water also comes in handy for baking bread and pizza dough. You read that right: Just replace the plain water in your bread recipe with the leftover pasta water. According to The Kitchen, this works for recipes like pizza dough, sourdough, and quick breads. Thanks to the extra starch in the water, your bread will brown better and have an extra crispy crust. In quick bread recipes, it can even make the loaf a little chewier.

If you do decide to sub in pasta water for plain, test the water for saltiness and just leave the salt out of your bread recipe so it doesn’t end up too salty. Far from just being good for thickening sauces, leftover pasta water is almost like gold in your kitchen, so don’t waste it by dumping it down the drain on your next Italian night.