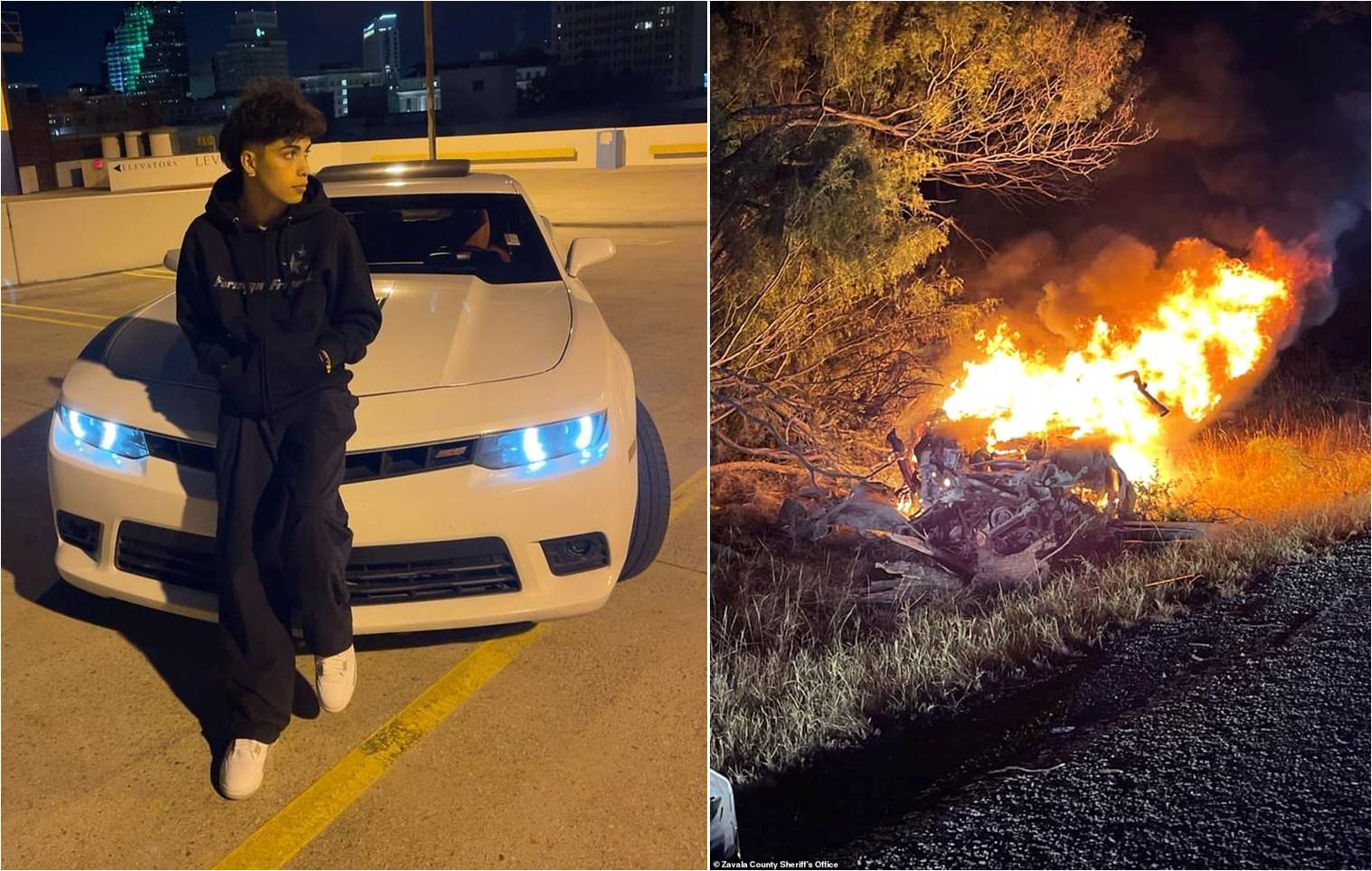 TikTok star Gabriel Salazar, 19, posted photos of himself posing in front of his white Chevrolet Camaro muscle car just days before he and three others were killed in a police chase in Texas that ended in a fiery crash.

Salazar, who was known as GabeNotBabe on social media, was driving and had three passengers when police tried to pull him over in Zavala County, Texas, on Sunday.

Cops unsuccessfully deployed a tire deflation device on the 2014 white Chevrolet Camaro involved in the crash – which has a top speed of 184mph and starts at $24,450 – and it eventually hit a tree and rolled multiple times before bursting into flames.

Officials from the La Pryor Fire Department, Crystal City Volunteer Fire Department and Alamo EMS responded and told News4 San Antonio that they had trouble putting out the fire due to a ruptured gas tank that was spilling fuel.

Salazar joined TikTok in 2019 and accumulated more than 2million followers before his sudden death. He often shared videos of himself lip syncing and dancing.

On Instagram – where he has more than 775,000 followers – the Brownsville, Texas, native showed off his love for cars.

In his last post before the fatal accident, he leaned on the hood of the white Camaro wearing a black hoodie, black sweatpants and white sneakers and captioned the photo: ‘Should I get my septum back?’ He was referring to a nose piercing.

Salazar had two Instagram story highlights dedicated to cars on his profile, too – one titled Whip and another simply an emoji of a red car.

According to the police report, officers tried to stop Salazar while he was driving a white Chevrolet Camaro around 1.25am but he refused to pull over. The car eventually crashed into a tree and rolled over multiple times before catching fire. All four people in the car were pronounced dead at the scene (pictured)

Before the photo with the Camaro he shared a lot of photos of a Black Ford Mustang. In one story highlight a driver was doing donuts in the sports car in a parking lot with a friend in the passenger seat. In another clip, he filmed a pickup drug doing donuts around a lamppost. It was unclear if Salazar was in the driver’s seat in either video.

‘I’m niceee w[sic] with it’ he wrote on another video of a car skidding on an empty street at night. In one clip Salazar posted, the speedometer showed that the unidentified driver was going 90mph.

The tragic crash happened five days after his latest post. Salazar and the three other people in the car were pronounced dead at the scene.

Danna captioned a series of photos of her brother in Spanish: ‘I’d give anything to have you here with us, we need you so much. I’ll no longer be able to see your beautiful smile. I love you little brother. I hope to see you soon.’

Salazar’s best friend and fellow TikToker Ricky Flores started the hashtag ‘LLG’ – Long Live Gabe – alongside photos he posted of him and his late friend.

‘Words can’t even explain how I feel right now. Man I would do anything to get you back right now bro,’ he added.

‘We have so much memories together, man…I know he would love to see all these people here for him,’ he said through tears.

A GoFundMe page set up by another one of Salazar’s friends, Chris Vasquez, as a memorial fund.

‘Gabriel loved his family and was always horsing around with her sister and little brother. He was always there with a big hug and smile, and his family will never forget those warm moments,’ he said as a tribute to his friend on the GoFundMe page.

‘He was so funny with a quiet sense of humor and sarcasm. I cannot believe that I am sitting here writing this. How is this real life?’ Vasquez, who is also a popular TikToker with 1.3million followers on the app, added.

He is survived by his parents, older sister and younger brother, who he did not often reveal on his social media pages.