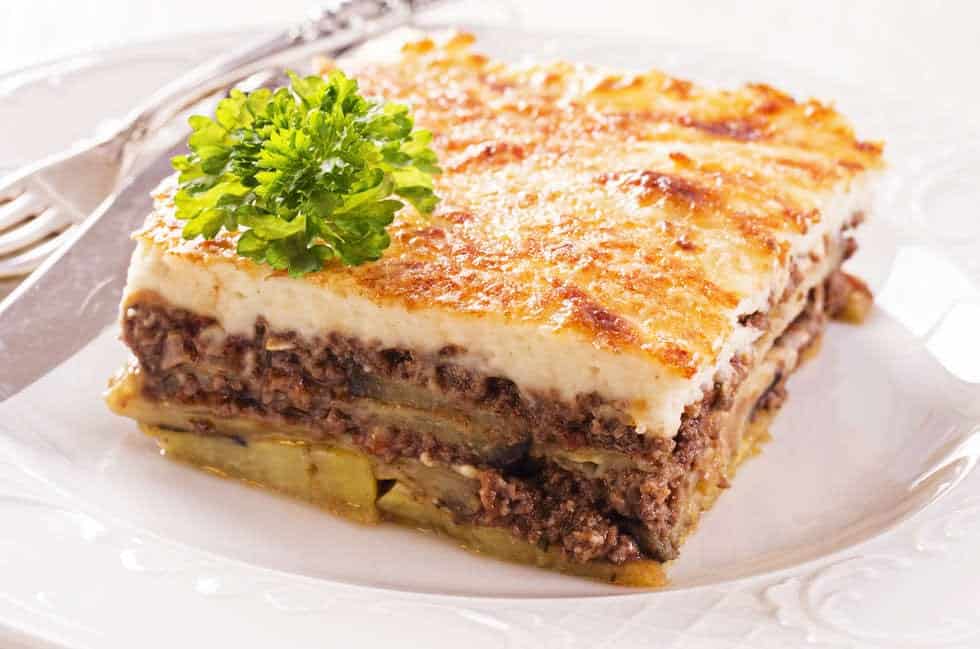 This dish is a legend! Creamy, juicy and absolutely delicious.. Greek moussaka (mousaka) is one of the most popular dishes in Greece, served in almost every tavern and prepared in every household on special occasions and big family meals and for good reason! To prepare a traditional Greek Moussaka recipe, luscious layers of juicy beef mince (or lamb) are cooked in a tomato based sauce, layered with sweet eggplants and creamy béchamel sauce and baked together until golden perfection.. Simply irresistible! With this step-by-step traditional Greek Moussaka recipe you can easily recreate this traditional delight from scratch! So go ahead, indulge yourself to this little sin.. This easy to follow Greek moussaka recipe never fails to impress and is always a crowd pleaser. The essence of this traditional Greek moussaka recipe can be summarised in three key stages: preparing the meat filling, preparing the béchamel sauce and cooking the eggplants. Each stage will require dirtying some pans, but i think you will agree that the end result is well worth it!

The traditional Greek moussaka recipe calls for either lamb mince or a mix of lamb and beef. But if you can’t handle its strong flavour and prefer a lighter version try substituting with good quality beef or veal mince.

To prepare the meat sauce for this moussaka recipe, the ground beef is sautéed in olive oil, flavoured with onions and garlic and then simmered in red wine and tomato sauce. The aromatic herbs and spices used in the traditional moussaka recipe penetrate the meat and give a really characteristic taste and smell which permeates the house, once put in the oven! Let the sauce simmer for a while to allow the flavours to mingle.

The creamy béchamel sauce is the most essential part for a traditional Greek moussaka recipe and probably the trickiest part too. To achieve the perfect texture for your béchamel sauce, add the milk (preferably lukewarm) a little bit at a time whilst constantly stirring. The perfect béchamel sauce for your moussaka should be smooth and creamy. The key is to whisk the sauce constantly to allow each time the flour to absorb the milk, so that it doesn’t get lumpy. Cook the sauce over medium-low heat in order to prevent it from burning and sticking on the bottom of the pan, but be careful to cook it enough, until you can’t taste the flour and is thick enough.

The base for a traditional Greek moussaka is most commonly fried eggplants. Some moussaka recipes also use sliced potatoes, so if you like potatoes, try adding a layer of sliced potatoes as the first layer to this amazing dish for some extra comfort during the winter months. The traditional Greek moussaka recipe calls for fried eggplants (and potatoes), but for a lighter alternative, try drizzling the aubergines (and potatoes) with some olive oil and bake them for 20 minutes instead of frying them. Some eggplants may be bitter, so it is very important to remove the bitterness by seasoning with salt and letting them stand for half an hour in a collander.

So go ahead, give this traditional Greek Moussaka recipe a try and amaze your friends and family with this extra tasty hearty dish! Try combining it with some delicious little cheese pies to blow their mind away!