Transgender Woman Accuses TSA Of Transphobia: “Going Through The Scanner, I Always Have An “Anomaly” 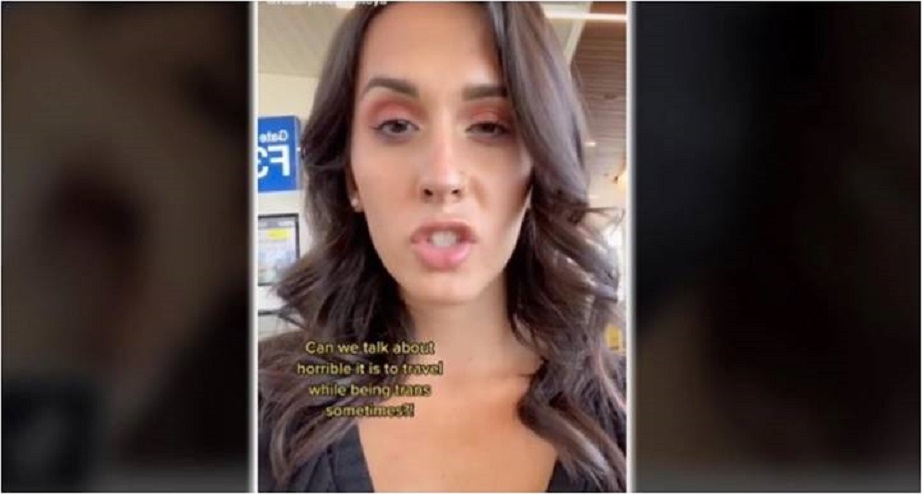 A transgender woman has gone viral with a video lamenting the issues she faces while traveling and accusing the TSA of being transphobic. The clip quickly racked up a million views after the woman lambasted the agency for making her “uncomfortable.”

Rosalynne Montoya, a transgender model and content creator, went viral after she accused the Transportation Security Administration (TSA) of being “transphobic” following an upsetting incident at the airport. Montoya took to video to relay her difficulties after an incident that occurred while she was traveling from Phoenix to Los Angeles to visit her boyfriend, according to The Blaze.

Describing the obstacles she faced at the airport while traveling, Montoya —who’s described as an Arizona-based, Hispanic, bisexual, nonbinary transgender woman by Buzzfeed — recalled how she was humiliated by the treatment she received from a TSA agent when she arrived at the airport. She posted the clip on TikTok and later uploaded it to her YouTube channel under the title “TSA is Transphobic.”

“Can we talk about how horrible it is to travel while being transgender sometimes?” Montoya asked as the video clip began. “I always have immense anxiety leading up to going through security,” she admitted, adding, “This being said, I totally recognize the privilege of having all of my documents be correct. So, the gender marker on my license, for example, says female.”

Montoya went on to explain how this has actually become a problem for her. “Going through the scanner, there’s a male scanner and a female scanner in the TSA checkpoint,” she explained. “And, looking at me, you know, I look like a woman, and I am a woman, so that’s great. I love having cis assuming privilege when I feel unsafe, such as in an airport,” she continued before explaining the issue this causes.

“Going through the scanner, I always have an ‘anomaly’ between my legs that sets off the alarm,” Montoya recalled. “So, she asked me if I had anything in my pants and I told her no,” she continued, adding that the TSA agent said maybe it was the metal on her shorts that was creating the issue before offering to scan her again.

After agreeing to be scanned again, Montoya once again set off the alarm. It was at that point that she decided to tell the TSA worker that she was transgender. “Look, I’m trans. Just pat me down,” Montoya recalled telling the agent, but the agent allegedly offered a different solution. Unfortunately, it only took a bad situation and made it worse, according to the transgender traveler.

Montoya’s video quickly received millions of views with the transgender woman saying that the experience left her feeling “dysphoric and disrespected.” Is that really the TSA’s concern? Their priority is security. As we all know, the agency was created after the September 11, 2001, terrorist attacks to identify threats. An anomaly under someone’s clothes could be a dangerous item being smuggled onto a plane, or it could be unexpected anatomy. Do you want to take a risk and gamble on which it might be?

Wouldn’t it be more troubling to have such an “anomaly” ignored? What’s more, Montoya herself noted that her situation is unique, saying, “Many states require trans people to have bottom surgery before allowing us to change our gender marker. I changed my documents in Washington state — which is luckily more trans-friendly than most states. I feel incredibly thankful and fully recognize this is a privilege many trans people do not have.”

Thankfully, there is a solution for transgender people, which Rosalynne Montoya plans to utilize next time. “In the future, I will be signing up and paying for TSA pre-check before my next flight to hopefully prevent this from ever happening to me again,” she explained, but added, “I shouldn’t have to take this extra step in order to feel safe while traveling.” While I don’t want anyone to feel humiliated, I also don’t want to travel on a plane, where fellow passengers can have something “unexplained” in their pants that appears like it shouldn’t be there.

Cher: ‘I’m so Disappointed in America’

These “Truths” Should Intensify Your Longing to Take Back Freedom! Pray! – AWK Must WATCH!

May 5, 2021 Morgan
Thanks for subscribing! Please check your email for our latest news.