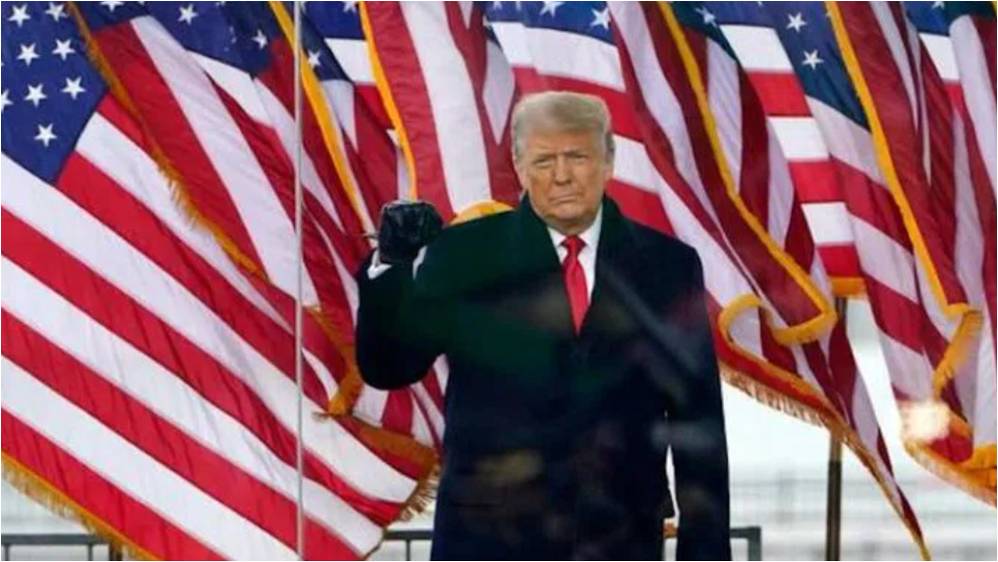 Donald Trump has laid out a 2.0 vision on how he will make America great again, again, and reverse the last two years of Joe Biden and the Democrat’s disastrous policies that have resulted in soaring inflation and gas prices, high crime, surging illegal immigration, and left the world on the brink of WW3.

In a wide-ranging interview aired Tuesday night on the Just the News TV show on Real America’s Voice, the 45th President of the United States said his plan begins with recapturing GOP control of at least one chamber of Congress in November and creating a bulwark to stop the destructive Biden agenda.

“When I watch to see what’s happening, it’s very, very sad. I mean, our country is being destroyed by these people,” Trump said. “The border is a disaster. We no longer respected. They don’t respect our leader at all. They don’t respect Biden at all.

“It’s so sad to see what’s happened to our great USA. But we can come back. I think these midterms are vital, just vital,” he said.

“We don’t have a free press. We really don’t have free speech anymore. It’s very bad, very dangerous. These elections are going to be absolutely critical for this country,” he added.

Trump said he is growing more confident that Republicans can take back the House in the fall elections, but he considers the GOP’s chances in the Senate tougher under Senate Minority Leader Mitch McConnell.

“I think the House is in great shape. I think the Senate is hurt badly by Mitch McConnell, very badly. I think he’s terrible. He’s also terrible for our country,” said Trump, blaming the Kentucky Republican for allowing the Biden infrastructure bill to pass Congress with bipartisan support.

Trump threw cold water on one idea being floated by conservatives like Rep. Matt Gaetz, R-Fla., who wants to nominate the former president to be House speaker if the GOP wins.

“It’s not something I want,” he said. “A lot of people bring it up. It’s brought up all the time.”

He added a second time for emphasis: “It’s not something I would be interested in.”

Trump offered a pointed message for defeating the Biden-version of the Democrat Party.

“They have no voter ID, defund the police, sanctuary cities, weak military, we’re gonna raise your taxes, no energy independence. All things that were all done,” he said. “Bad on religion. Bad on the Second Amendment. Bad on oil.“

Trump said he believes runaway inflation, which some fear could reach 10% annualized in March, could be alleviated by quickly ramping up oil and gas production and lowering energy costs that affect everything from transportation to food production.

“We have to straighten out inflation, which we can do much easier than people know,” he said, noting he had gas prices down to $1.87 a gallon at one point in his presidency.

“If energy comes down, it’s so important,” he said. “Other parts of inflation are coming down too. I was saying today, ‘I read where food is going to make energy look like it’s a good deal, that the food prices are going to go up much more very soon, much more than the energy prices.’ “

Several times in the interview, he championed the cost of the Biden agenda on everyday Americans, reverting to a strategy he used often in 2016. He noted that in some places gas was nearing $5 a gallon in the Midwest “where it was never that bad” and that people go to stores and cannot find items that used to be readily available.

Withholding foreign aid until countries take back their illegal migrants

Trump said solving crime and border surges will require more than just securing the border like he did last time, saying many countries have released prisoners who have now migrated into the United States illegally and will need to be repatriated.

“We have to immediately seal up the border,” he said. “And we have to get a lot of the people out because many of these people came from prisons in these countries.

“It’s no longer just those few countries, including Mexico that I talk about all the time. It’s now like 140 countries. Some people said they didn’t know there were that many. They’re just flooding in. And they’re almost all letting their prisoners out into the United States. Why wouldn’t they? It’s very expensive, keeping prisoners, and they don’t want them anyway.”

Trump said he learned during his first time one effective tool is to threaten to withhold foreign aid to get countries to take back criminals who migrated illegally into the U.S.

Trump said he believed the country could reverse declining trust in vote counting by getting states to model their election laws after those in Texas and Florida, which have mandatory voter ID, reject no-excuse absentee ballots, reject non-citizen voting and strong enforcement as a deterrence.

“Texas has a great law. Nothing’s gonna happen there,” he said.

“You have to swamp them, because there comes a point when they can’t cheat that much. I believe that happened in Florida. That’s why I did so well,” he added.

Stabilizing the world, and a NATO for China

As he has stated in recent rallies, Trump re-iterated he did not believe Vladimir Putin would have invaded Ukraine if he were still president, detailing a conversation he once had with the Russian leader.

The former president said Biden’s bungled exit from Afghanistan this past summer almost certainly emboldened Putin to go much further than he planned on Ukraine but that the Russian leader miscalculated the will and capabilities of the Ukrainian people.

“I think what happened, he (Putin) was on the border, he had 200,000 people, and he was negotiating. He was going to make a good deal,” Trump said. “And then he saw what happened in Afghanistan. And he said, ‘Man, these guys are incompetent. Let’s go in.’ And he didn’t know the force that he’d be met with.“

Asked whether he would build on the Quad alliance he launched to counter Chinese aggression during his first term and create a NATO for the Pacific, Trump suggested the current NATO might expand its mission.

“Well, I think this NATO maybe should be involved,” he said of China, noting how he got NATO countries to pay up on delinquent contributions.

“I’m the best thing that ever happened to NATO, because I made them pay. So NATO has plenty of money now.”

No free press, no free speech

Trump made clear he won’t decide whether to run for president in 2024 until after he sees what happens in the midterm elections.

“I want to look at what’s happening,” he said of the midterms. “And then we’re going to be doing something else.“

But he made clear he views the next two elections as a litmus test for the sort of America we will live in for decades.

“We don’t have a free press. We really don’t have free speech anymore,” he said. “It’s very bad, very dangerous. These elections are going to be absolutely critical for this country.”