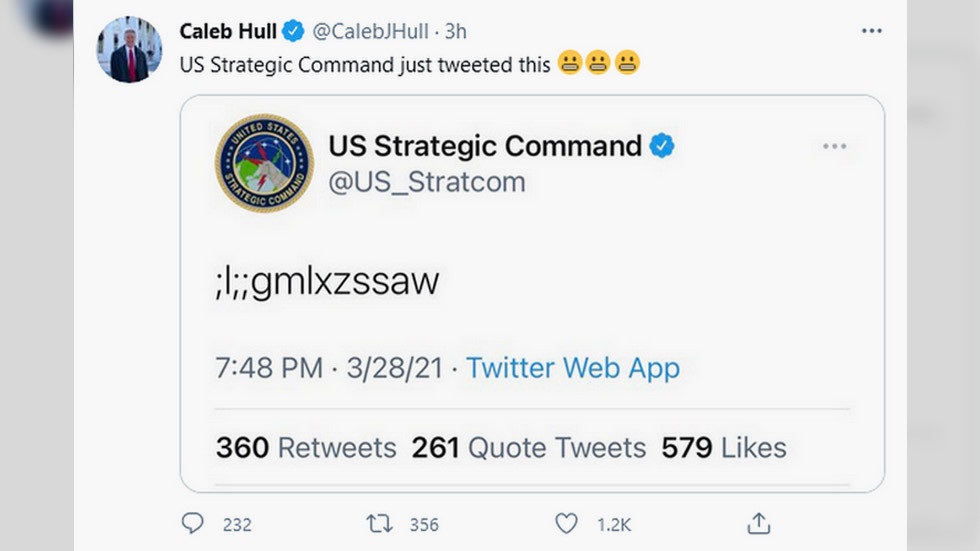 US Strategic Command sent the Twittersphere into panic mode after it tweeted out an assortment of characters which some feared could be the nation’s nuclear codes. They later asked everyone to disregard the now-deleted post.

The cryptic 13-character message appeared on STRATCOM’s Twitter feed on Sunday evening. In the 30 minutes that transpired before the post was removed, it racked up thousands of retweets.

The message prompted a wave of frantic speculation regarding whether something relatively benign, such as a Twitter password being compromised, or something far more serious, such as part of a launch code for nuclear weapons entering the public domain, had taken place.

Bearing in mind that STRATCOM oversees the nation’s nuclear arsenal and fearing the worst, some began to brace themselves for imminent nuclear apocalypse.

Time to say goodbye to everyone. I’ll miss my friends and family

“Not really how i pictured the world ending but also not entirely surprised,” another distraught user wrote.

This did little to reassure those already on the verge of panic.

“[Are] you gonna explain this or is the world ending in 1 hour,” one user asked.

ayo you gonna explain this or is the world ending in 1 hour pic.twitter.com/z6660UOdb1

With the guessing game in full swing, the Canadian Forces in the US tweeted support for STRATCOM. “These things happen. This might even happen to you one day. It’s okay, folks.”

These things happen.
This might even happen to you one day.

However, this only further fueled speculation that the content of the cryptic message was indeed something worth keeping secret.

“Our nuclear codes, we worked hard to keep those secret and… they just tweeted it out,” one person said.

Others suggested the military would be better off without Twitter, or even that the US should become nuclear-free to avert any incidents.

“So in conclusion, literally no one should be trusted with nuclear launch authority and we’d all be better off when every single warhead is dismantled,” military technology writer Kelsey D. Atherton said.

My 2021 platform: In addition to scrapping the Nuclear Posture Review in favor of an integrated review, nuke the STRATCOM twitter account which, like deterrence, works best when it’s quiet. pic.twitter.com/xyZUZnYKiG