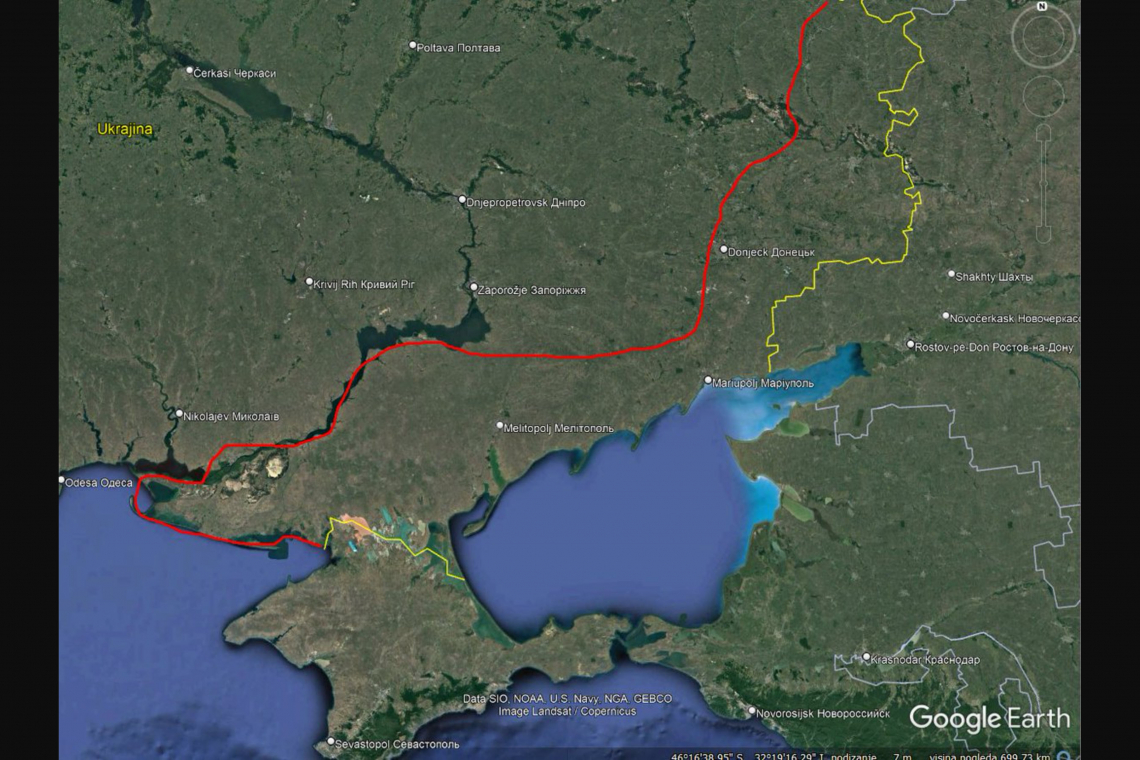 The city of Kherson in southern Ukraine appears to have been captured by Russian Army forces.  Images from city security cameras seems to show Russian Military Vehicles in complete control of the main “Freedom Square” in the center of the city.

According to US military mapping -above- Ukraine is now completely cut-off from the Sea of Azov and has lost most of the east/southeast of the country.

The scalable map below shows the location of Kherson:

This seems to make clear the city itself has fallen too the Russian Army.

Again, this is in the south/southeast of the country, and does not reflect the gains Russia has made in the north, which are substantial.  The map below, from Russia, offers a far more complete picture of the amazing victories the Russians have achieved in only about seven (7) days:

To offer readers some insight into how amazing this is, bear in mind that in Gluf War One, the United States had to bomb Baghdad, non-stop, for forty (40) days before being able to secure that city.   Russia has done far more in Ukraine, in far less time.

This is a developing story, and additional updates will appear below . . . check back

International airlines are sounding alarms over the knee-jerk closure of various national air space to Russian air carriers.   They point out that if Russia does the same, in retaliation to the closures imposed by the west, it will literally CRIPPLE international air travel because so many routes rely on crossing Russia air space, as represented on the map image below:

Having to go around Russian air space would make fuel requirements beyond the capacity of certain aircraft, and the added travel distance would make air travel prohibitively expensive due to fuel costs.

So the “Sanctions” being imposed by governments around the world are actually having the effect of harming THEIR OWN citizens and companies!

As outlined in the report, twenty percent (20%) of global air cargo is now adversely affected.

Transit times will take longer because of the route changes, and the distance limitations of some cargo aircraft, and prices will go up substantially because all air lines will have to fly such longer routes to avoid Russian air space.  Once again, government’s knee-jerk reactions are hurting their own people and their own industries.  It seems clear that governments are a special kind of stupid in this particular situation.

President Vladimir Putin of Russia outlines during a speech, how NATO outright lied to Russia.   NATO countries promised Russia that NATO would not move “one inch east” when Germany was being re-unified.   Instead, NATO admitted Poland, Romania and the Baltic states . . . all of which were moves to the east, towards Russia’s borders.   Putin makes clear “They said one thing, but did another. As we say in our country, they cheated; they deceived us.”   Here’s vide of him saying it today:

THAT deception on the part of NATO (read U.S., U.K. France, et. al) is the reason Russia is now moving against Ukraine.   NATO (via the EU and the USA) want Ukraine to join NATO so they can put missiles on Ukraine soil, aimed at Russia.   The Russians have said for years they will not tolerate that because such missiles would have a flight time of only five minutes to Moscow.   Yet the US/EU/NATO persisted and now, Ukraine is invaded to prevent them from joining NATO and prevent them from hosting NATO missiles on their soil.

This entire war was completely avoidable had the US/UK/NATO simply stopped trying to bring Ukraine in.  All the death, all the destruction could have been avoided with that one, simple act.   But the US/EU/NATO wouldn’t stop.   So now it’s being stopped by force.  Nice work US/UK/NATO.

Overnight, the city of Odessa reportedly came under intense naval barrage from the Russian navy.   Video below reportedly shows the onslaught:

The map below shows the location of Odessa, which fits the Russia attack plan.  Clearly the Russians are moving west along Ukraine’s southern coast, apparently to cut Ukraine completely off from the Black Sea.

The Russian Ministry of Defense has publicly announced to residents in Kiev, there will be high-precision missile strikes in Kiev, against government offices and media outlets connected to the Ukraine Army disinformation campaign.  While residents were publicly told yesterday they should take one of two “safe corridor” routes OUT of the city, those who chose to remain should remain indoors and not be anywhere near Ukrainian government offices or military-media facilities.  Russia’s Defense Ministry has warned the residents of #Ukraine’s capital, #Kyiv of its intention to strike the security facilities and the media operations center of the Ukrainian army with high-precision weapons. It did not disclose when those strikes would occur.

The Ukrainian army was utterly smashed in Bucha, a northwest suburb of Kiev overnight.   The destroyed hulks of Ukrainian military vehicles, line the streets as the Russia Army just plowed right through them.  Bucha is only ten miles form the actual center of Kiev, the capital city of Ukraine.

Russia’s Foreign Minister Sergei Lavrov, just explained that Moscow’s position in “negotiations” with Kyiv right now is that Ukraine must:

2) Submit to “demilitarization” that entails abandoning any weapons (or alliances) that threaten Russia, AND;

3) Agree that Crimea, Luhansk and Donetsk (i.e. The Donbas) are no longer part of Ukraine, forever.

In addition, RUSSIA’S LAVROV SAYS KYIV NOT CONFIRMING 2ND ROUND TALKS YET

Federal Reserve Chairman Jerome Powell just made a strange statement: “The war underscores the need for action on Digital Currency.”    WTF?   Why in the world would those two things be connected?   This has “bad” written all over it!

Federal Reserve Chairman Jerome Powell has REFUSED to answer when asked at a Press Conference this morning if the Federal Reserve is monetizing U.S. Debt.

The global financial system has very few rules, but one of those rules is that sovereign nations cannot monetize their debt.  They cannot simply print cash money to pay their bills.

When nobody wants to accept US cash, and nobody wants to use it as a means of payment, the entire United States financial system goes into complete, irreversible, collapse.  Total destruction of the value of everything which is denominated in ‘Dollars.”

If the answer is “Yes” then all hell breaks loose, immediately, as countries aroudn the world STAMPEDE out of the dollar.  Hyperinflation would hit the USA overnight, banks would collapse overnight. It would be financial Armageddon!

The fact that Powell refused to answer, tells most __thinking_ people the answer must be “Yes.”   His non-answer, may end up causing exactly the STAMPEDE mentioned above.  We’ll know soon enough.

Well, the powers-that-be simply cannot tolerate that happening.   They will need a distraction to divert attention, or a really big disaster, to blame it all on.

Smash the world, wreck the global economy.  Every country on earth goes into collapse, including the USA, and everyone gets to blame the war for it.

No responsibility for having spent our entire nation into Bankruptcy and sending the wealthiest nation in the history of the human race, into financial oblivion.

THAT is what’s happening, and the fact that Jerome Powell REFUSED to answer “Is the federal reserve monetizing U.S. debt” seems to me, to be proof.

Russian Ministry of Finance advises Russians to buy gold. “Investing in gold will be an ideal alternative for Russians to buying dollars amid an unstable geopolitical situation.

POWELL: LIKELY WE CAN ACHIEVE A SOFT LANDING  (HT REMARK: Whenever you hear a Banker talk about a “soft landing” they actually mean “a crash.”  Here it comes, folks.  I’ve warned have food, water, medicines.  I meant it!)

NATO’s future naval base in Ochakovo, Ukraine – financed by the Brits – has been totally destroyed by Iskander-M missiles. Russia now says it was a top strategic target; It’s existence threatened Crimea and the whole south of Russia.  Well, now we know why the British have all their knickers in a twist!

1:33 PM EST — Russian forces have reportedly entered Mariupol city. Heavy clashes ongoing in the city.    There is VIDEO purporting to show AZOV Regiment Nazis of Ukraine Army actually . . . . CRUCIFYING . . . . a Russian soldier in Mariupol, then setting him on fire and burning him to death.  This may be why the Russian are storming-in to Mariupol right now.

REMINDER: When you hear cries from Ukraine about a School being hit by Russian Army attack, just be aware it is usually because the Ukraine Army is, in fact, hiding in (or operating from) that building, as seen in the photo below: