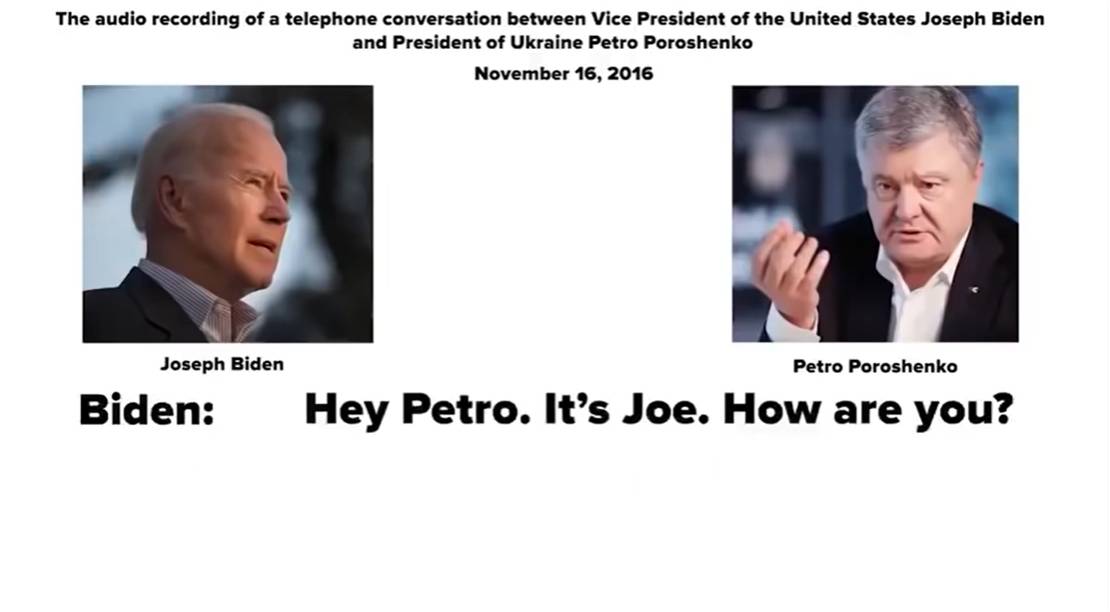 A video from a press conference in Ukraine is going viral.  It is the follow-up to a video press conference that Ukraine released over a year ago, in which members of the Ukraine Parliament demanded that President Zelensky and President Trump investigate billions of dollars of corruption in Ukraine that is tied to the U.S.  The newly released video is meant to provide documentary and eyewitness information about the corruption — and the Biden family figures prominently in the story.

The video is long — over an hour — and not all of it involves the Biden family. This post quotes those portions of the press conference that address Biden family corruption.  The gist of it is that, while Democrats obsess about Trump’s purported criminality, despite the absence of any evidence, their chosen standard-bearer is extraordinarily corrupt.

I believe that Biden is the first person ever to serve in the highest reaches of government — the Senate and the vice presidency — who sold his country out to the highest foreign bidders.  It’s an insult to everything America has stood for since its inception that massive election fraud might allow this person to set foot in the Oval Office.

With that intro, here’s the video, followed by quotations from the video regarding Joe and Hunter Biden.  I recommend Nabu Leaks for more information, enlarged pictures of the relevant documents naming the Bidens, audio of phone calls between Biden and former President Poroshenko after Trump won the election, and the full transcript of the press conference.

At one of the first press conferences about a year ago, we showed bank transactions for hundreds of thousands of dollars to the family of former US Vice President Joe Biden, namely to his son Robert Hunter Biden. The latter was a member of the board of directors of the infamous gas production company Burisma.

The inclusion of Biden in the Burisma leadership and payment for his services is nothing more than a political cover that protected Zlochevsky from the Ukrainian law, namely from the criminal code.

Two foreign witnesses whose identities are protected — Witness 1 and Witness 2 — came forward to testify about the facts of the case. Konstantyn Kulyk, the Head of the Group of Prosecutors of the Prosecutor General’s Office of Ukraine, explained what the witnesses offered:

One quote from a statement by a Witness:

“All the described financial transactions were fictitious. And a lot of money was paid in Ukraine so that the state authorities turned a blind eye to it.”

In the period from November 2014 to October 2015, the Witnesses noticed strange recurring payments that, at the direction of Oleh Nelin (Zlochevsky’s assistant in the Verkhovna Rada of Ukraine), were sent from the account of BURISMA HOLDINGS LTD, which was opened for the personal needs of Mykola Zlochevsky, in the Latvian PrivatBank AS to the account of the American company ROSEMONT SENECA BONAI LLC.

The witnesses drew attention to these payments since about 20 times the same uneven amount was recurring — $83,333.33 as payment for consulting services.

In the period from November 2014 to October 2015, the money stolen from Ukrainians, located on account of BURISMA HOLDINGS LTD with the Latvian PrivatBank AS, was transferred to the account of ROSEMONT SENECA BONAI LLC in the American bank MORGAN STANLEY in payments in total amounting to $3.4 million for consulting services.

This is a payment for the political “cover” that Biden provided to Zlochevsky.

The video offers a graphic image showing the flow of money and favors:

Andrii Derkach picked up the narrative.  He focused on Joe Biden’s conversations with former president Poroshenko when Viktor Shokin, a prosecutor, started looking into Zlochevsky’s graft.  As we all know, Biden openly boasted about holding up money from the U.S. unless Poroshenko fired Shokin.

The press conference included audio from a November 16, 2016 conversation between Biden and Poroshenko.  Biden was wheeling and dealing for influence and money — and conducting foreign policy behind Trump’s back.  The men spoke again in February 2017, at which time Biden smothered Poroshenko with fulsome compliments.

Ukraine’s government is gunning for Joe Biden.  The Ukrainians know that Biden helped prop up a corrupt government in their country and that he profited mightily from doing so.  No wonder this video has gone viral.