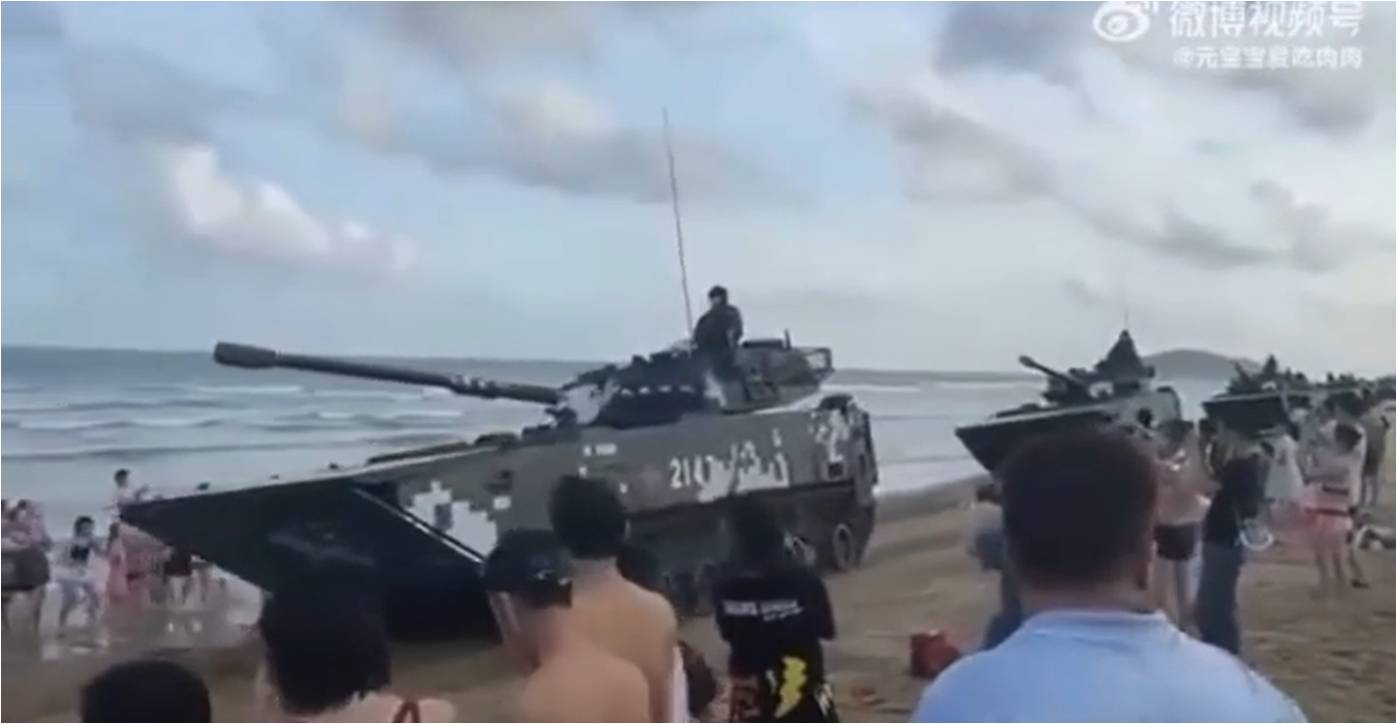 The People’s Republic of China today explicitly warned the United States against Speaker of the House Nancy Pelosi trying to travel to Taiwan.

They said “We will not accept any excuses for Nancy Pelosi trying to land in Taiwan, including any kind of emergency.  If problems with the plane occur, we will allow landing in Hainan, not Taiwan.”

So the stage is set for actual confrontation.

According to sources in Asia, the Hal Turner Radio Show can report that Nancy Pelosi’s aircraft is scheduled to land in Taipei, Taiwan, at 22:20 Hours local time TONIGHT.

Meanwhile, THREE United States Air Force B-52’s, with their transponders OFF, are presently in Taiwan air space.  As of Monday, Japan-based USS Ronald Reagan aircraft carrier strike group is in the Philippine Sea after transiting the San Bernardino Strait on Saturday following a port visit to Singapore and operating in the South China Sea. California-based USS Tripoli is in just south of Okinawa. Tripoli has been embarked with up to 20 F-35Bs.

China has just CANCELED all civilian flights into or out of Fujian Province . . . the mainland province directly opposite Taiwan.

China will conduct military drills in some areas of South China Sea Aug. 2-6 and will ban ships from entering the areas.

Pelosi’s flight is being watched by 297,000 people. I’ve never seen so many watchers of a single plane on Flightradar24:

The Democrats need a big change to prevent carnage at the midterm elections. The so called “defeat of Russia” is simply not happening. It all backfired into economic disaster.

So the thing to make everyone forget the past failures would seem to be a new war with China.

The timing of this situation has all been dictated by Nancy’s trip, which means the US and allies are dictating the timing. China has responded as expected with brinksmanship threats- paraphrasing from memory… “Play with Fire and Die by Fire, We WILL RESPOND MILITARILY, Prepare for war”, etc.

China has put themselves on a path with no turns at this point. Can’t back out now without losing face.

One of the last times the US chose the timing to start a major war was Bush Sr’s 1991 war to liberate Kuwait from Iraq. Saddam woke up that morning to the largest armada of aircraft and ships imaginable, launched from a huge consortium of the willing allies. 31 years ago. How time flies.

One thing that tends to be the case, from past observations. Whatever you think is the situation is wrong. The fog of war, or whatever you want to call it typically surrounds the opening moves. Silly reports of a half trillion dollar F-35 program being grounded because they “forgot to put the charge into the ejection seats”. Something that supposedly happened in April and is now being broadcast as a headline. Right before a major military engagement. riiiight.

Whatever the opening of this new war looks like is will certainly be interesting to watch if you overlook all the death and destruction. Biden obviously has nothing to do with the plans or strategy being a mental vegetable and all.
The Deep State war machine in running the show.

Hard to imagine the “Nothing will happen” scenario at this point, but I suppose anything is possible. Maybe China will try to save face by making some claim about their altruism and desire for world peace. They have been having big problems at home as well from what little I have gleaned from the interwebs. Financial problems, and a population that seems 30 seconds away from a full scale revolution.

May we live in interesting times. The old Chinese curse.
Both sides make public claims about the immense power of their militaries.

As Patton used to say, or I think he did, as I mis-remember and smoosh together his various quotes, something like, “War is the crucible of truth. Truths are reaffirmed, and lies are burned away to ashes.”

Times have changed in the last 31 years.

The US has abused its friendships around the world. Allies have been coerced and manhandled to the point that the great “political capital” that existed for the 2 Iraq wars has been spent and squandered.

Any coalition of the willing against China will be borne not of any love for America but for simple self preservation.  A China dominated world would be a lot worse than one dominated by the US, even on our worst day.

I guess we don’t really know who the allies of the US will be in this conflict, but it is safe to say most or all of the following list: Japan, Australia, S. Korea, with some possibility of India, Vietnam, The PI, and a few NATO allies like the UK and France. Russia should have been our ally as well, but Biden has burned that bridge rather completely, which is the reason I have been rather vocal in opposing the doomed Ukraine conflict from the beginning.

Strangely, for some reason, China is also NOW deploying what appear to be artillery onto the Beaches along the Taiwan Strait!   The artillery cannot reach Taiwan, cannot shoot down US planes, and there is no actual “invasion” of China planned, so it is not known what China will accomplish with this . . . but it is taking place as seen in the video below:

China has deployed NUCLEAR-CAPABLE short-range ballistic missiles along the coastline of Fujian Province opposite Taiwan.

“The DongFeng-16, or DF-16, is a multistage short-range ballistic missile (SRBM) and is one of China’s most advanced SRBMs. First deemed operational in September 2015, the new weapon system has achieved 11 successes out of 11 test launches and is an improved model of the DF-11 and the DF-15.

The multistage, solid propellant missile possesses a range of around 1,000 km and is MIRV capable of carrying up to 3 nuclear warheads with a payload of up to 1,000kg. Deployed on a five-axle Sanjian Corporation TEL, the DF-16 is road-mobile and is launched from a vertical position. Using both inertial and GPS guidance systems, the missile is highly accurate with a CEP of 5m and capable maneuvers to avoid missile defense systems during the terminal phase. China is presently suspected to have approximately 50 operational DF-16 missiles. The SRBM was publically shown for the third time during a military exercise in China on February 6, 2017.”

For what it’s worth, as of 08:20 here in the US east coast, it is now 20:20 in Taiwan.    Intel from Asia indicated that Pelosi’s plane was allegedly scheduled to land there within about two hours.

FlightRadar24’s tracking of that plane has been HACKED OFFLINE.

So right now, we in the civilian world do not know where that plane is located.

Where we are right now is simple.  It seems to go like this: