Video: A Heart-Stopping Moment A Concealed Carry Permit Holder Shoots A Dog Trying To Tear Apart A Small Child – The Mother Was Wounded 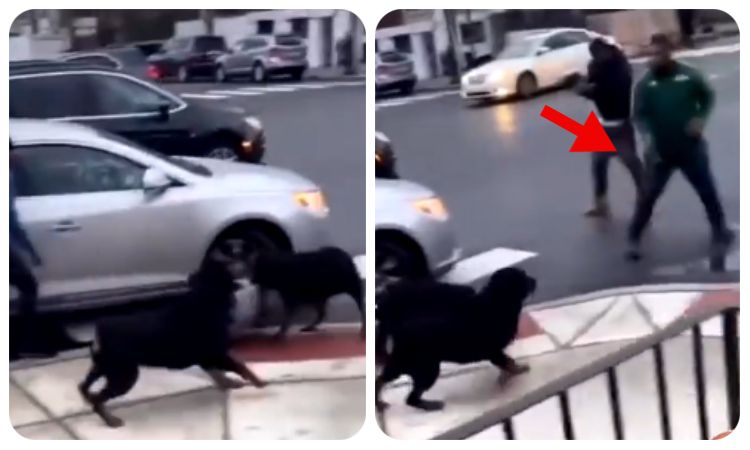 A woman was wounded after a shot was fired at a vicious dog on Friday morning, the Philadelphia police say.
Police say the dog was mauling a small child when a man fired his gun at the animal.

A woman was wounded by shrapnel after a shot was fired at a vicious dog on Friday morning, Philadelphia police say. It happened in the 6100 block of Ogontz Avenue at 7:14 a.m. Police say the dog was mauling a small child when a man fired his gun at the animal.

Investigators initially believed the woman had been shot.

The woman was taken to the hospital by a private vehicle. She is listed in stable condition.

The man who fired the gun had a permit to carry, police say, and will not be charged.

The child who some reports alleged was autistic, suffered bite marks to the face and legs. He is listed in stable condition.

A dog was killed in this incident, police say. Another dog is in the custody of ACCT Philly.

Two dogs believed to be rottweilers were running loose when one attacked the child named Kasion.

Dwayne Patrick was driving by and saw the dog attack. He says he took his legally owned gun, which is licensed, and shot the attacking animal.

“I caught the attack on camera. I immediately took action, jumped out, told everybody to move, and discharged my firearm,” said Patrick. “There were a lot of people out there. They were beating the dogs shooting with a paintball gun, trying to do everything to get the dog off the child, but there was nothing no one could do.”

Patrick was able to meet Kasion as his mother and aunt took him home from the hospital.

He suffered cuts to his ankles and face and received multiple stitches.

“That’s the guy who shot the dog you keep telling people,” said Kasion’s

mother as she introduced Patrick to him.

“You’re really strong,” said Patrick as he and his girlfriend gave the family get-well cards.

Kasion’s mother, who did not want to be shown on camera or share her name, thanked Patrick.

Officials are still looking for the owners of the dogs.

The second amendment once again saved lives and we need more heroes like this person!

I used to say that the concealed carry permit holders in Philly are rare but it seems that I stand corrected!