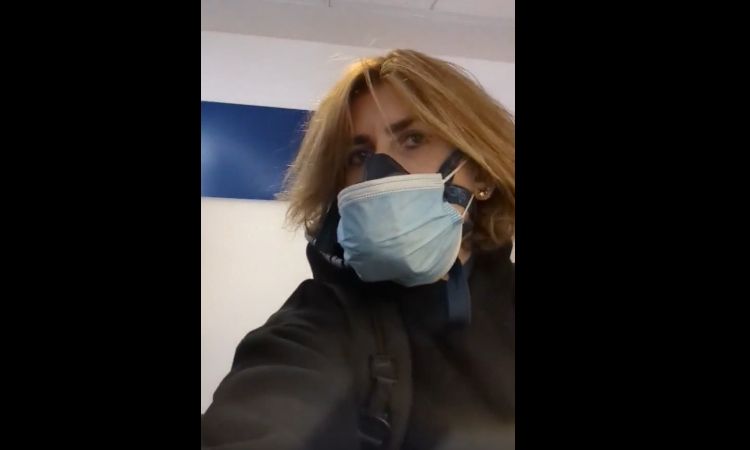 Face masks have become commonplace on airplanes — and are here to stay for quite a while — but not every airline allows every kind of mask.

On Delta’s flights, as on all flights, mask must be worn at all times during the flight except when eating, drinking, or taking oral medication.

The mask must not remain below the nose and mouth for an extended period of time as it must be put on properly in between bites and sips.

The only other acceptable reason for taking it off is to put on an oxygen mask in the event of an emergency or for medical exemption purposes.

A video that has gone viral on social media shows how extreme mass formation psychosis can actually get.

The woman in the video is seen with a mask over an actually closed vest ventilator. She is being escorted off a Delta flight after she was warned several times to stop posting videos to her Twitter account complaining about their mask protocols.

The woman was not happy many of the passengers were wearing only cloth masks and would not stop making videos of her surroundings.

This is the same woman that recently posted to Twitter how she started divorce paperwork with her husband because he took their kids from lockdown to go have a bite of food.

The Federal Aviation Administration last month reported that 10 passengers were hit with fines totaling $225,287 because of allegations of unruly behavior on flights. In those cases, according to the FAA, passengers shoved flight attendants, used expletives, threw fits, and refused to comply with the FAA requirement for masks.

As of last month, the FAA had documented 5,114 reports of unruly passengers and 3,710 reports of refusing to wear masks this year. It said 239 cases led to penalties.

To curb what it has described as a dramatic increase in unruly or dangerous behavior aboard passenger airplanes, the FAA released a public service announcement in August with a simple message: “Unruly behavior doesn’t fly.