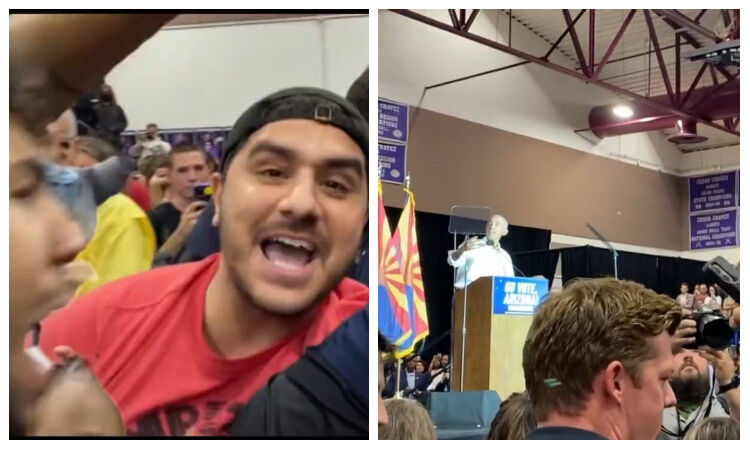 Barack Obama argued with a heckler during a rally in Phoenix, Arizona, on Wednesday.

The former president was talking about how Republicans want “an economy that’s very good for folks at the very top, but not always so good for ordinary people” when a heckler interrupted him.

Obama issued a challenge to the heckler, urging him to organize his own rally to express his opinions.

The man is a Latino and said that he called out Barack Obama for supporting Katie Hobbs, a woman running for AZ Gov who has a history of discriminating against BLACK PEOPLE.

You can notice how Obama tries to “motivate” the crowd by using the right words!

Obama’s reaction speaks a lot about the former POTUS, he got the man escorted for exposing racial discrimination against black people!

Obama attempted to continue by saying “Communities where too many kids…” before being shouted down by Hernandez who said, “Katie Hobbs discriminates against black people!”

The former president then addressed Hernandez directly saying, “Are you gonna start, you gonna start yelling?” as the Democratic faithful in attendance began to boo the Frontlines host.

While Hernandez continued to call out Katie Hobbs, Obama said to him, “You know, you, have to be polite and civil when people are talking then other people are talking and then you get a chance to talk. Set up your own rally. A lot of people worked hard for this. And once again ignored the discrimination case.

Hernandez continue to say “Katie Hobbs discriminates against black people!” as Obama attempted to control the situation and said “C’mon man!” as event security grabbed Hernandez and began to manhandle him out of the rally.

The crowd cheered as Hernandez was removed. One of the rally attendees got in Hernandez’s face as he was taken from the room and screamed at him “Get out!” while another placed a hand on the investigative reporter’s shoulder. Security pulled Hernandez out of the man’s reach while the Frontline’s host said “Here we go. A person of color is not allowed to be in here. The Democrats are deporting me again. Here we go. Here we go. We can’t talk about Katie Hobbs! We can’t talk about Katie Hobbs!”

After Hernandez was taken from the main room to the lobby, the security guard while physically removing Henandez from the area said, “You wanna be taken outta her?” to which Hernandez replied, “This is assault.”

That’s right, the champion of black people escort a Latino American from a rally because he wanted to talk about the discrimination case of a Black woman who was fired from her legislative job years ago.

Talonya Adams said her firing from her job as a policy adviser for state Senate Democrats in 2015, when Hobbs was the Senate’s Democratic leader, was discriminatory. Federal juries found Adams was discriminated against based on her race and gender and awarded her millions.

Hobbs initially deflected responsibility, blaming Republicans for underpaying Adams and making the ultimate decision to fire her. In December, she apologized “unequivocally” to Adams and acknowledged her response “fell short of taking real accountability.”

The former president spoke during a rally for Democratic candidates in Arizona, warning of a “dangerous climate” in politics and advising against supporting politicians who would not accept the outcome of the 2020 election.

Obama travelled to Phoenix to support Democratic candidates running for office, including Katie Hobbs, who is running for governor of Arizona.

The two-term president, who left office in 2017, is still regarded as the leader of the Democratic Party and has previously visited these states: Wisconsin, Michigan, and Georgia.

On Saturday, 5 November, the Obama campaign will continue in Pennsylvania, a state where the contests for governor and senator are close.