Video: Bidens Dole Out Halloween Candy To First Responders’ Kids But Another “Pedo Moment” From POTUS Is Ignored By The MSM 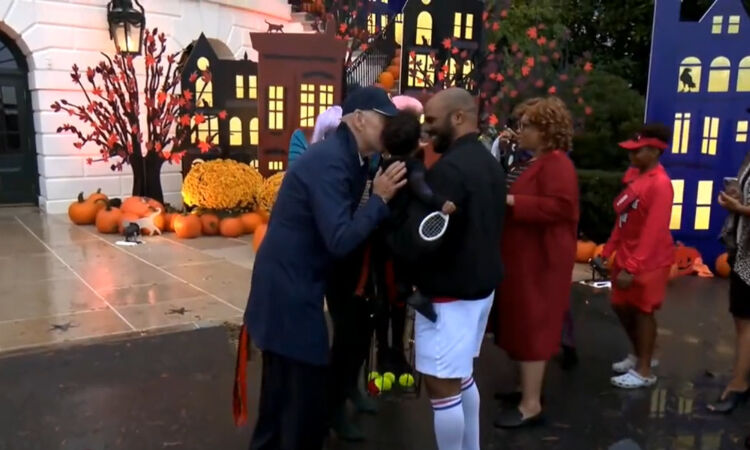 This is the story we heard from the mainstream media:

The Bidens, who were joined by their family members such as daughter Naomi, briefly met the kids, handed out candy, waved and offered words of encouragement.

The South Portico of the White House was decorated with fall colors, pumpkins, and various shades of autumn, and songs such as “Ring of Fire,” “Psycho” and “Hall of the Mountain King” set the mood.

It was the Bidens’ first time welcoming trick-or-treaters as president and first lady. They were in Europe for Halloween last year, their first in the White House. They had the Pennsylvania Avenue side of the executive mansion lit up in orange for the spooky holiday.

Too many children around creepy Joe who has a habit of sniffing them or making awkward moves when he’s around them!

A viral video from the event was ignored by the mainstream media!

A father holding his baby walked up to Joe Biden and Biden immediately went in for a sniff.

And another moment where we can’t tell what is going on but definitely Joe is not feeling right!

You’re gonna wanna make sure no kids are around when you watch these videos — it might scar them for life. And for good reason, Joe Biden has a very scary past when it comes to little kids, especially young girls. We all know why he has the nickname “Creepy Joe,” don’t we? But this is yet another “taboo topic” the media refuses to talk about. The only time they had to address anything even slightly close to this topic, was during the campaign when women were calling Joe out directly.

One thought on “Video: Bidens Dole Out Halloween Candy To First Responders’ Kids But Another “Pedo Moment” From POTUS Is Ignored By The MSM”