Video: BLM ‘Anti-Violence Activist’ Lunging At A Woman With A Large Kitchen Knife – The Police Arrives And Serves Him Instant Justice 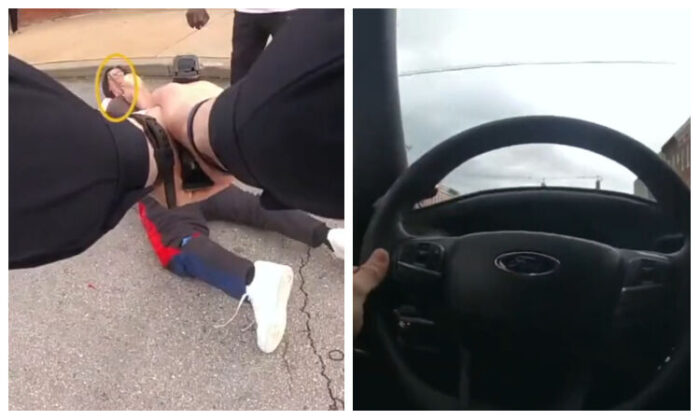 When officers arrived, Moorehead was seen lunging at a woman with a large kitchen knife, and an officer opened fire, fatally striking him.

Officer Zachary Rutherford, a three-year law enforcement veteran assigned to the BPD’s operations department, was named as the officer who shot Moorehead by the Maryland Attorney General’s Office’s Independent Investigations Division on Tuesday.

The recordings show Rutherford yelling at Moorehead to put down the knife many times before shooting him numerous times while he was on the ground. Moorehead remained atop the female while maintaining control of a butcher’s knife.

Moorehead was the creator of the city’s “no shoot zones,” which he spray-painted around neighborhoods in an effort to reduce gun violence.

He was also part of the BLM movement but his ideas were crazy!

Last year the Baltimore convict and community activist has come up with a solution to the city’s soaring murder rate – paying killers not to shoot people.

Tyree Moorehead spent 18 years in prison for second degree murder which he committed when he was 15.

He was released from prison in 2012 and has since devoted his time to trying to work with criminals in Baltimore to reduce crime rates.

He told FOX 45 this week that he believes the way to lower the city’s soaring shooting numbers is to pay criminals not to kill people.

‘I can relate to the shooters, guess what they want? They want money.

‘I’ve talked to these people, I’ve seen the shooters, it’s a small city, I know who the hustlers are,’ he said.

He didn’t give any more details as to how such a system would work.

One thought on “Video: BLM ‘Anti-Violence Activist’ Lunging At A Woman With A Large Kitchen Knife – The Police Arrives And Serves Him Instant Justice”