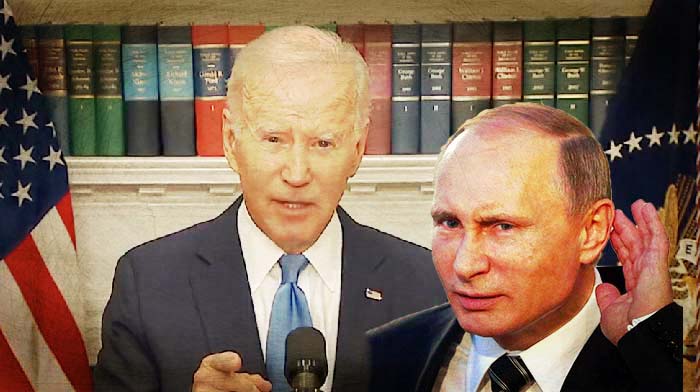 I am going to say this – Joe Biden’s dementia is going to land us in World War 3. I hope to God that Vladimir Putin understands that Biden has a severe case of dementia, and isn’t paying actual attention to his shaky “cranky” words… But Joe’s actions, also show that he’s itching for war with Russia. He’s getting us closer and closer every single day. Our country has never been in more trouble than we are right now. Here we are, in a recession, sky-high inflation, gas prices spiking yet again, and Joe Biden is talking to dead congresswomen and trying to fire up WW3.

Our safety lies in the hands of a confused old buffoon.

Americans are struggling at home to keep their heads above water and Joe Biden is sending a nonstop flow of BILLIONS of unchecked money to Ukraine. I don’t know about you, but I am so sick of it. This was never our “war” and had we stayed out of it, it would have been over eons ago. But we’ve been funding a proxy war against Russia and dragging this out, and enough is enough.

Meanwhile, Putin announces the annexation of Ukrainian regions, and this sent Joe Biden into a tizzy.

CNN is reporting that President Vladimir Putin announced Russia would seize of nearly a fifth of Ukraine on Friday, declaring that the millions of people living there would be Russian citizens “forever.”

Under the annexation process, which is illegal under international law, Moscow will recognize four Ukrainian regions as Russian territory: Luhansk and Donetsk – home to two Russian-backed breakaway republics where fighting has been ongoing since 2014 – as well as Kherson and Zaporizhzhia, two areas in southern Ukraine that have been occupied by Russian forces since shortly after the invasion began.

Putin’s announcement, made in a formal speech at the Kremlin’s opulent St. George’s Hall on Friday, follows so-called referendums in the regions that were universally dismissed as “shams” by Ukraine and Western nations.

The Biden admin responds to Putin’s move with sanctions.

The Hill reported that the Biden administration on Friday announced a new round of sanctions in response to Russia’s annexation of four Ukrainian territories, targeting government and military officials and their family members.

The departments of Treasury, Commerce and State each announced separate sanctions intended to target decisionmakers in Moscow, allies of Russian President Vladimir Putin and entities that support the military-industrial complex in Russia.

“The United States unequivocally rejects Russia’s fraudulent attempt to change Ukraine’s internationally recognized borders, including by holding sham ‘referenda’ in Ukraine’s Luhansk, Donetsk, Kherson, and Zaporizhzhya regions. This is a clear violation of international law and the United Nations Charter,” Secretary of State Antony Blinken said in a statement.

Blinken said the sanctions serve as a clear warning from the U.S. and its Group of Seven allies that there will be “costs for any individual, entity, or country that provides political or economic support to Russia as a result of its illegal attempts to change the status of Ukrainian territory.”

Biden, who’s trying to talk very tough here, ends up sounding like a shaky, cranky old man, trying to be the “Big Guy.”

Here’s what Biden said to Putin: “America is fully prepared with our NATO allies to defend every single inch of NATO territory, every single inch. Mr. Putin, don’t misunderstand what I’m saying. Every inch.”

Here’s what people are saying online about Biden’s words:

“Why is he trying to provoke him?”

“The old guy trying to still sound like the Big Guy. Sad and scary”

“This fool is getting us closer to WW3”

“Not the man to be handling this. Not by a long shot”

“We are SO screwed with him being in charge of this conflict. He didn’t listen to his top military generals over Afghanistan, so there is ZERO confidence he will listen to them now.”

“He sounds like an old man shaking his fist at the clouds.”