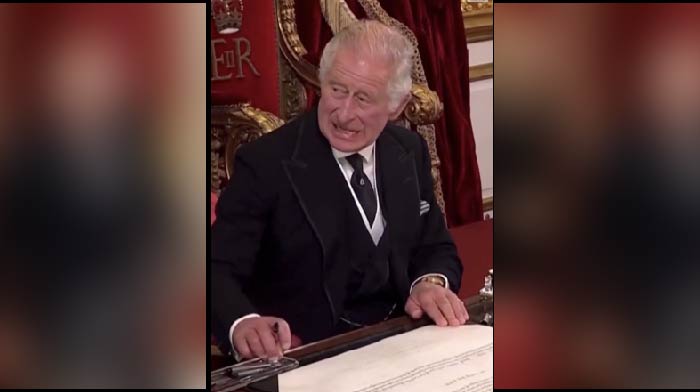 King Charles is off to a rocky start. The “woke” elitist new King already had his first scandal before dinner. I gotta say, I don’t have high hopes for this guy. He’s a climate nut and a total hypocrite, but he’s also quite the bungler. He’s always saying or doing the wrong thing. It’s always plagued him. Just imagine Joe Biden if he were King of England, how that would look. Okay, maybe not THAT bad, but you get the idea.

So, what happened this time? Well, footage of King Charles becoming really irritated by a pen after being proclaimed the new King has gone viral. He wasted no time looking like a completely rude, out-of-touch elitist, lacking all the grace and humbleness of his mother.

Probably wasn’t the best look to kick things off.

After being formally proclaimed the nation’s new King, Charles held his first Privy Council meeting, where he sat to sign official declarations.
However, the moment went south, when Charles discovered there wasn’t enough space on the small desk to sign both of the large documents before him, and instead of being polite and kind, he looked like a jerk toward his staff.

You can watch the videos below:

He literally looks like Ebenezer Scrooge in the second video. What the heck?

Here’s what people are saying online:

“This guy is an a-hole. You can tell”

“I couldn’t imagine our Queen doing that.”

“Reminds me of the movie, The Last Emperor, when the Emperor ends up a prisoner and has NO idea how to put the toothpaste on his toothbrush”

“All of the privilege, none of the graces… At least he won’t be on the throne for 70 years.”

I have a feeling there will be a lot more moments like this, as Charles settles into his new role.