Video: Matt Gaetz And AOC Argue As They Stare Into Each Other’s Eyes Ahead Of A Vote For House Speaker – Here’s What They’ve Talked About 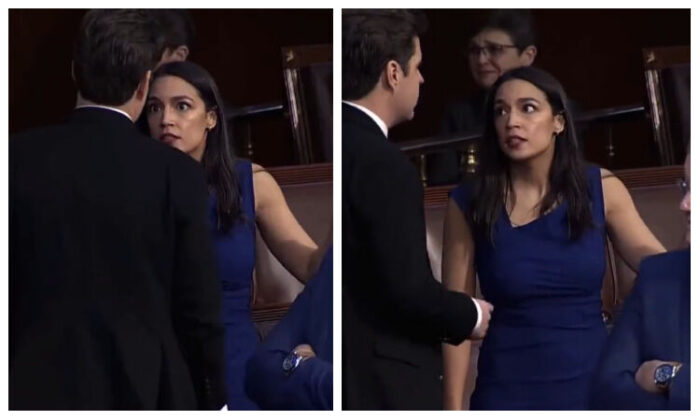 Rep. Matt Gaetz, R-Fla., told Rep. Kevin McCarthy, R-Calif., that he would not care if the stalemate over McCarthy’s speakership vote resulted in a Democrat being elected to the position, McCarthy claimed Tuesday.

McCarthy made the claim publicly Tuesday morning, just minutes before the Republican caucus was scheduled to vote on his bid to become speaker. He claimed Gaetz came to his office Monday evening along with other like-minded GOPers with a list of demands.

“Last night I was presented the only way to have 218 votes if I provided certain members with certain positions, certain gavels, to take over the church committee, to have certain budgets,” McCarthy claimed. “And they even came to the position where one, Matt Gaetz, said ‘I don’t care if we go to plurality and we elect Hakeem Jeffries.”

It seems that Gaetz was pretty serious and there is a huge drama at the moment!

The House chamber was rather loud.

That’s because the raucous political monkeys are about to vote for a new House Speaker and everything is up for grabs.

Ahead of the Second Round vote for Speaker, a video popped up where Matt Gaetz and AOC are arguing as they stare into each other’s eyes.

Gaetz told Ocasio-Cortez that McCarthy has been telling Republicans that he’ll be able to cut a deal with Democrats to vote present, enabling him to win a majority of those present and voting, according to Ocasio-Cortez. She told Gaetz that wasn’t happening, and also double-checked with Democratic party leadership, confirming there’d be no side deal.

McCarthy was suggesting he could get Dems to walk away to lower his threshold,” Ocasio-Cortez told The Intercept of her conversation with Gaetz on McCarthy’s failed ploy. “And I fact-checked and said absolutely not.”

Democratic Rep. Hakeem Jeffries of New York won all 212 of his party’s votes, a show of unity that, if it holds, requires McCarthy to win over all but four of his colleagues.