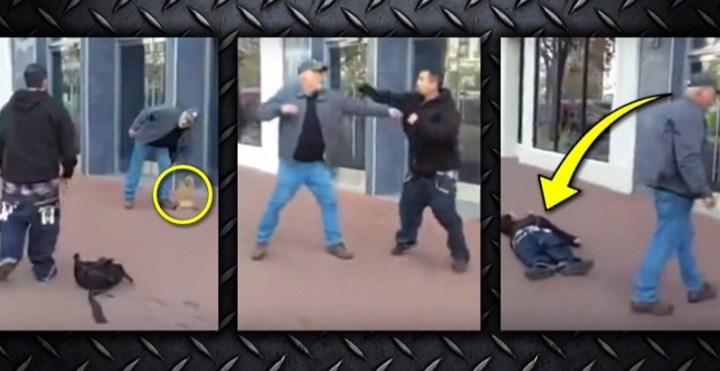 A shocking video has emerged online of a saggy pants punk who thought it was a good idea to harass and attack an elderly gentleman as he walked with a bag of groceries in his hands. The clip went viral after the would-be victim put his groceries down for a moment to give the punk a brutal dose of instant justice.

Every so often, a video is posted on social media of an innocent victim being knocked out by some random criminal who caught them off guard. The perpetrators of these sickening attacks are rarely caught by authorities for playing the “knockout game,” and they usually pick targets they see as weak or vulnerable.

In this shocking video, a similar situation appears to have taken place but with a much different outcome. An elderly gentleman was walking at a shopping center with a bag of groceries in his hands. Unexpectedly, a saggy-pants-wearing punk started causing trouble with the old-timer, threatening to assault the elderly gentleman.

As the 25-second clip begins, the punk, wearing saggy jeans with his boxers exposed and a hooded black sweatshirt, approaches the elderly man after putting his backpack on the ground, freeing his hands for an expected physical assault on the other man. Without even a slight show of panic, the intended victim puts his grocery bag on the ground and faces down his aggressor. “I’m going to hurt you,” warned the elderly gentleman.

This is when things took a painful turn. After the elderly man told the punk he was going to hurt him, the attacker put his hands up into some kind of ridiculous boxing position and started what can only be described as embarrassing footwork. As the punk circled his older opponent, he lunged at him to take a swing with his right fist. The moment the elderly gentleman stepped out of the way with ease was when the punk should have realized he was way out of his league.

It was very clear that the elderly man did not want to fight. He kept repeating the same words over and over. “I’m gonna hurt ya, I’m gonna hurt ya,” he said. It only took the elderly man a few seconds to get his timing down. Then, he fulfilled the promise that he had been making to the punk, who quickly learned that he should have listened to the warnings the old man had given.

In the clip uploaded to YouTube, the would-be victim hand-checks the punk a couple of times to establish his rhythm, and then, out of nowhere, he delivers a straight brutal fist to the punk’s weak jaw. That was all it took to drop the younger man like a ragdoll on the hard ground.

Really, these guys shouldn’t be surprised. Although they might just see an “old man,” they fail to realize that a lot of men from that generation spent a couple of years carrying an M-16 through banana leaves, giving them a strength that has stuck with them. It’s a might that so-called “men” like this punk will never understand — not until they get hit right on the button for messing with the wrong “old guy.”

At the end of the clip, the elderly man is seen walking back to his bag of groceries after a job well done. I highly doubt he will have any trouble with that guy ever again. I hope this viral clip is seen by the punk’s family and friends so they can shame him for attacking an elderly man and getting his butt kicked so bad. He should have listened when the elderly man said, “I’m gonna hurt ya.” The “old guy” definitely knew what he was talking about.