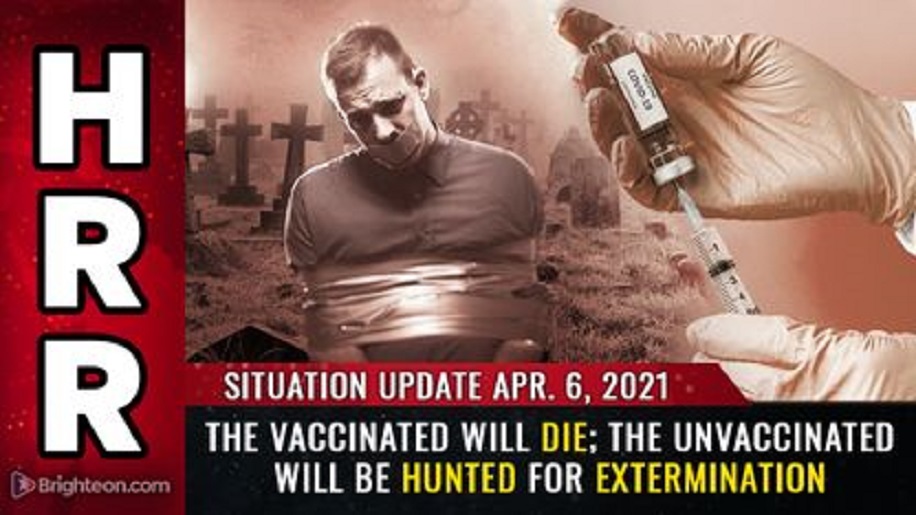 (Natural News) Another 25-or-so cases of “rare blood clots” occurred in Brits who were jabbed for the Wuhan coronavirus (Covid-19) with AstraZeneca’s injection, and the government of the United Kingdom has sort of acknowledged it.

Stopping short of flat-out linking the vaccine to the deadly adverse events, U.K. authorities are now reluctantly claiming that some batches of the injection must be “defective,” and this is why lots of people are becoming seriously injured or dropping dead from the shots.

Despite all this, Britain’s medicines regulator is still claiming that the jabs at large are “safe,” insisting that it is still unclear, somehow, whether or not the injections had anything to do with the deadly blood clots.

A number of other European countries have halted all administration of the AstraZeneca jab citing similar adverse events, and yet the U.K. is insistent that every injection is “safe and effective” for continued administration.

“In total, MHRA (Medicines and Healthcare products Regulatory Agency) said had [sic] identified 30 cases of rare blood clot events out of 18.1 million AstraZeneca doses administered up to and including March 24,” reported the Associated Press (AP).

“The risk associated with this type of blood clot is ‘very small,’” it added.

According to Dr. June Raine, the agency’s chief executive, Wuhan coronavirus (Covid-19) injections from AstraZeneca are very good and their “benefits … in preventing Covid-19 infection and its complications continue to outweigh any risks and the public should continue to get their vaccine when invited to do so.”

To learn more about how Wuhan coronavirus (Covid-19) injections are injuring and killing thousands, visit ChemicalViolence.com.

Nobody with a brain wants a Chinese virus injection

The Netherlands, meanwhile, is taking a much different approach by joining the other European nations that are no longer administering the AstraZeneca jab.

At first, the Dutch government had planned to simply restrict administration only to people under the age of 60, which is what Germany did. Instead, the Netherlands ultimately axed the jab entirely in order to protect its population against further damage.

According to Dutch Health Minister Hugo de Jonge, the halt is only temporary as “a precautionary measure.” In time, in other words, AstraZeneca injections will once again be plunged into the arms of the Dutch, which is music to the ears of the British government.

The only good news with all this is that many of the countries that were among the first to halt administration of the AstraZeneca injection before temporarily reinstating their administration are halting the program a second time, reports indicate.

There are simply too many adverse events emerging to continue safely administering the jabs, officials say, and tens of millions of European people do not trust the injections regardless and are not planning to get one.

In some countries, officials worry that if the unsafe injection continues to be administrated, people will lose trust in the government to safely regulate and administer other vaccines and pharmaceuticals.

After an incident involving serious clotting occurred in Australia, deputy chief medical officer Michael Kidd admitted to the media that the AstraZeneca jab was “likely” the cause, though officials in the U.K., where the jab is made, continue to deny any link.

“There have been 4,000 vax-induced deaths and 40,000 adverse events ‘recorded’ across the E.U.,” wrote one commenter at Zero Hedge. “Probably 10 times more were not recorded.”

“None of this should come as a surprise to the critical thinker,” wrote another. “The vax with no manufacturer liability being administered for a ‘pandemic.’ A ‘pandemic’ where there aren’t dead people everywhere, and where testing and media are proven frauds … There is no safe gene therapy.”