VIDEO: Suitcases Of Ballots Allegedly Pulled Out After Workers Told To Go Home 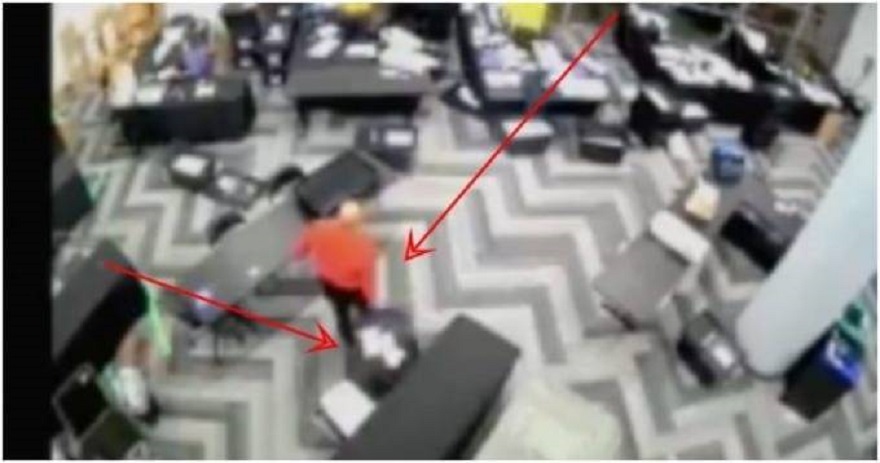 A stunning CCTV video from Fulton County’s State Farm Arena shows that on Election Day after poll watchers were dismissed, four election officials allegedly stayed behind to count ballots. You don’t want to miss this.

CCTV video footage of State Farm Arena in Atlanta, Georgia, shows that after poll monitors and media were told counting was done, four workers stayed behind to count ballots.

In the video, the workers are seen pulling out suitcases containing ballots from underneath a table. The room is where absentee and military ballots were being tabulated.

The video starts at 8 am on Election Day, but it’s not until after 10 pm that the suspicious event occurs.

We can see a room full of activity, and the Trump attorney presenting the video says GOP poll watchers and media are still present until approximately 10:25 pm.

“According to the witnesses, the Republican observers, there’s a lady who has blonde braids who comes out to announce ‘we’re going to stop counting,’ and ‘everyone go home’” the Trump attorney said. “And in fact, we see that and we see everyone clears out including the Republican observers and the press—but four people stay behind.”

“Who continue counting and tabulating well into the night from that point, which is going to be about 10:25 when they all clear out or 10:30,” she adds. “And they will continue counting unobserved and unsupervised out of public view as your statue requires until about one in the morning.”

The female Trump attorney goes on to explain that the GOP observers were suspicious so they went to the central tabulation center and got word from a news crew that counting had continued. So, not “everybody left according to plan,” the attorney adds.

This shocked the Republican observers, so they returned at about 1 am where they confirmed people had “just left.”

“We see four people who stayed behind consistent with our affidavits,” the Trump attorney says as she narrates the video at the Georgia hearing. “So when the coast is clear around 11:00 o’clock they are gonna pull ballots out from underneath a table…watch this table.”

“They pull ballots from underneath a table hidden by a table cloth,” she adds. “So what are these ballots doing there separate from all other ballots? And why are they only counting it then when the place is cleared out from all other witnesses?”

“That table was placed there at about 8:22 am by the lady with the blonde braids,” the attorney said. “So, she put that table there. The same person who cleared the place out is the person who put the table there.”

“Yeah, I saw four suitcases that come out from under that table,” she declares. “These machines can process about 3,000 ballots an hour. You have multiple machines there. And they’re there for two hours so you do the math.”

The attorney said that during the day the ballots were brought in from one door and were never pull out from under a table. She also said they only obtained this video the night before the Georgia hearing.

They decided after watching the key parts over and over and comparing how votes were tabulated during the day, that these “suitcases of ballots” were highly suspicious and not congruent with Georgia election laws.

Georgia state laws require poll watchers from both parties to be present for a count to be valid. The Trump team attorney, who is from Georgia, states that they believe there were enough ballots tabulated during the two hour period to cover Trump’s deficit.

As it stands, Biden has a slim 13,000 vote lead over Trump in Georgia.

“We believe it’s beyond the margin of victory in this race,” the attorney said. “Because if it’s only three scanners working for two hours, right, that’s 18,000 ballots that went through.”

Here’s the video evidence from Fulton County that was played before the Georgia Senate Oversight Committee, members of the Press, and President Trump’s legal team:

This part of the hearing was so stunning as the attorney hit the two main reasons the Georgia legislature should not certify this election.

First, she provided a very damning video that must be investigated by forensic election examiners. The “blond woman in the braids” can be found. If the video is found to be what the attorney and GOP witnesses claim it to be, then those 18,000 ballots must be thrown out.

The other key point has to do with Georgia state election laws. These election workers were essentially tabulating in secret without GOP poll watchers or press present, which goes against the election laws.

At the very least, the Georgia legislature should not certify the election for Joe Biden. Americans who feel their vote was violated by these states must continue to put the screws to their elected officials. Swamp creatures, as most politicians are, will not act unless We the People demand it.