[VIDEO] What Was Placed in Mike Pence’s Hand Just After He Certified The Election? 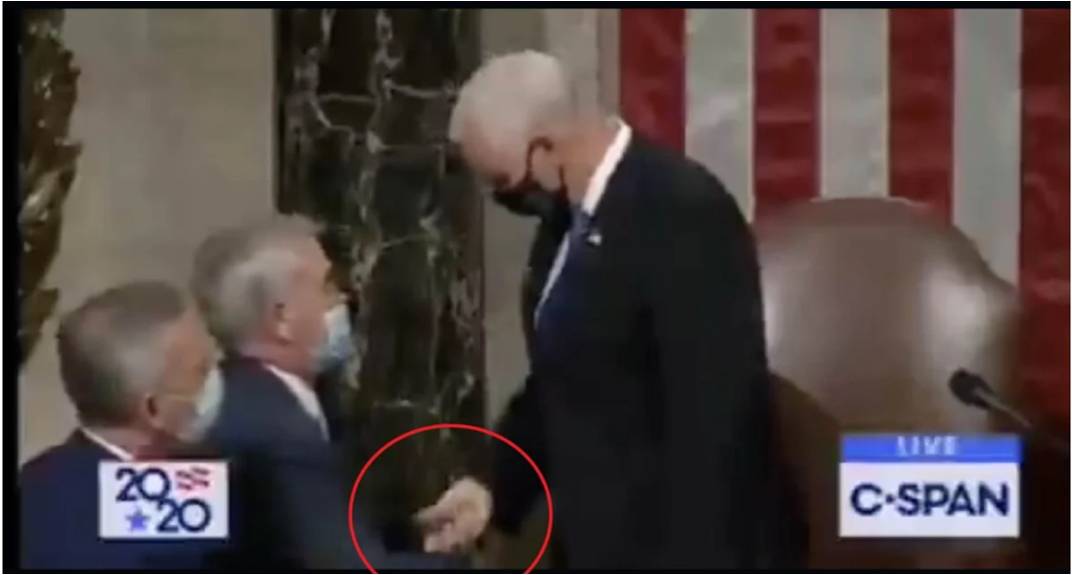 What the heck was that?

The internet is buzzing after a video started making the rounds showing VP Pence shaking hands and receiving “something” in the palm of his hand.

I am not 100 percent sure, but people are saying the person who handed him that “something” was Fox News reporter and Trump-hater John Roberts.

But don’t quote me on that.

The video takes place just moments after Pence turned his back on 75+ million voters and certified the election that a massive amount of people believe was fraudulent.

Many believe that Mike Pence has been the biggest and slipperiest swamp snake in DC this entire time – but that his “mild-mannered” Christian facade fooled everyone.

Think about it – Pence is the reason Flynn went down, back in 2016 he led the task force to hire swampers to work with Trump, he was the leader of the COVID task force, and he also delivered the final blow to President Trump.

I dunno, I can’t help but wonder if he was the “mole,” or at least one of the leakers this entire time.

So, when Pence did something “strange” at the certification, it raised a lot of eyebrows.

After Pence receives the mystery item, he appears to look at it and then places it in his pocket.

You can watch the videos below (the second video is a slow-mo version):

I posted a slowed down version and closeup about 4 hours ago. pic.twitter.com/YysDctGm4l

Here are some comments on the mysterious item:

“looked like a medal or special coin. Don’t think its anything nefarious.”

““Welcome to the illuminati””

“is that a watch without a band?”

“Could be a NWO reward coin or Democratic pin, something nefarious”

“Correct me if I’m wrong, but isn’t that also a Masonic handshake? The placement of the thumbs? His handshake with the pope that I saw recently posted appeared the same.”

What do you think it was? An innocent gift or trinket, or something even more mysterious?