[VIDEO] Why Does Michelle Keep Humiliating Her Husband? 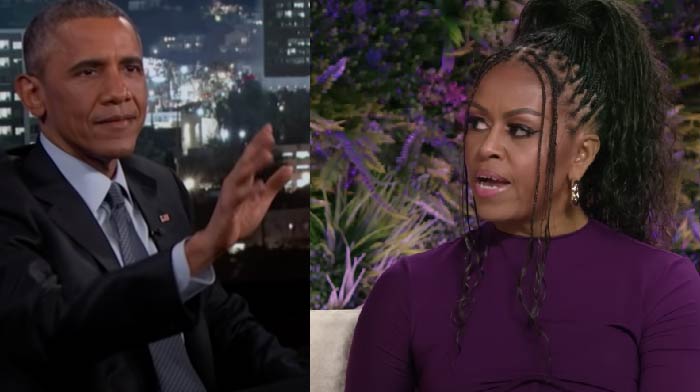 Michelle Obama has a history of making her husband, Barack look like a stooge. She’s actually become known for this — from making him seem like the “dopey clueless dad” in a TV commercial, to making wild claims that she’s been “miserable” and “angry,” Michelle does not sound like the most supportive or happy wife. And that’s fine, I guess. But should you air that dirty laundry all over social media? And to make matters worse, you have Barack, who literally sounds like he’s terrified of her. You add all of that up, and you appear to have one very dysfunctional family. And Michelle is at it again. This time, she’s claiming that she “couldn’t stand” Barry for the first 10 years of their marriage.

I bet she started liking him when he got her into the White House, though…

The New York Post reported that former First Lady Michelle Obama revealed this month she “couldn’t stand” ex-President Barack Obama for about a decade when the couple’s two daughters were young.

During a roundtable interview with Revolt TV, Michelle discussed the challenges of raising two young daughters as the power couple was advancing their careers — and the strain it put on the marriage.

“We don’t talk about how much work is required and how hard it is even when you are madly in love with the person, even when everything works out right,” she said.

“People think I’m being catty by saying this: it’s like, there were 10 years where I couldn’t stand my husband. And guess when it happened? When those kids were little.”

Michelle conveyed the tough balance between raising the girls while ­dealing with their own hectic schedules.

“And for 10 years while we’re trying to build our careers and, you know, worrying about school and who’s doing what and what, I was like, ‘Ugh, this isn’t even,’ ” she explained.

Malia and Sasha Obama were 10 and 7, respectively, when their father was elected president.

“Little kids, they’re terrorists. They have demands. They don’t talk. They’re poor communicators. They cry all the time,” she said.

“They’re irrational. They’re needy. And you love them. And so you can’t blame them, right? . . . So you turn that ire on each other.”

Throughout the ups and downs, the former first lady suggested she still respected and admired her spouse. She stressed it’s important to know “your person.”

Michelle has been promoting her second book, “The Light We Carry,” which was published in November.

Interesting how the media did nothing but project “marital issues” on Trump and Melania, while they painted Michelle and Barack to be a fairytale.

There are some things that are better left within the family.