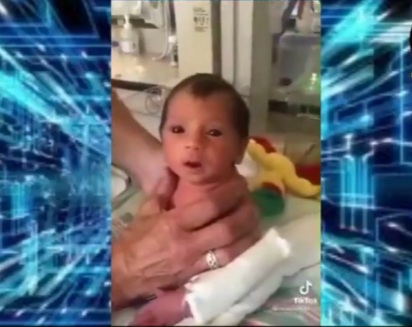 In a new interview for the radio program Dirección Correcta, La Quinta Columna has referred to the so-called ‘pandemic babies,’ those babies who have been conceived during the pandemic and who, in addition, are the product of parents inoculated with the COVID-19 vaccine.

Now that 9 months have passed since the vaccination campaign began in countries such as the United Kingdom and the United States, some alarming videos have begun to go viral showing babies with a different appearance and who appear to be on a lower cognitive spectrum than average.

Of course, it’s part of La Quinta Columna’s research to pay attention to these videos and see if we start seeing more babies with complications like the one in the video they have shown.

Until it’s as evident and massive as the magnetic arms are, it will not be possible to say with certainty that these babies are the product of the intervention of graphene and other components present in vaccines that affect reproductive functions. But there are suspicions. Orwell City offers the key excerpt.

Ricardo Delgado: Videos of the first babies being born after 9 months since the vaccination campaign began in December are appearing. Especially in the UK and the US. So, what midwives are seeing when both parents are inoculated with this substance: with graphene. Which we know affects sperm motility. Hormonal regulation in women at the level of the hypothalamus. And, in men too. It affects spermatogenesis in men.

For whatever reason, if there’s a conception of pregnancy —which is unlikely to happen because of infertility, as we were talking about before—, what we’re seeing is that babies that are born look weird. Strange. It’s something like a stage similar to a reduction in IQ. Something close to the trisomy of chromosome 21. Between Down syndrome and a relatively average person in IQ. With features similar to Down syndrome, without being Down syndrome. And we’re already seeing at least a dozen cases that are being verified by midwives.

These are nothing but lies. Everything is a lie. And they’re going to do whatever they want by lying because they’re the ones who say what to do. They rely on the authority of science. They have bought science because they pay the health professionals, and those do and say whatever they are asked to. People will only transmit the message that comes from them.

But the serious issue here is that people are seeing it, and they don’t realize it. You can’t give a pregnant woman almost anything. Not even paracetamol. And if they put pressure on me: ‘No, don’t take too much. It may cause this and that…’ You have to measure everything with a magnifying glass and look at it carefully before giving medication.