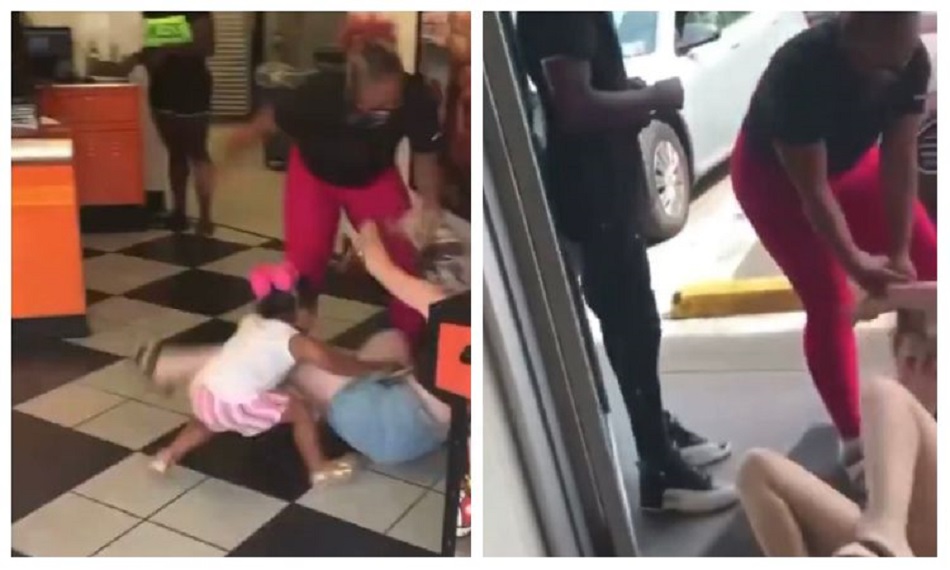 This morning a brutal and racist video surfaced.

The video is filmed in a Little Caesars restaurant in Augusta, Georgia!

As the woman savagely attacked her victim, 22-year-old Emily Broadwater, the six-year-old daughter attempted to pull her off.

In the video, Kennedy is brutally beating the woman and dragging her like yesterday’s thrash before literally stomping on her head.

It’s funny how everybody assumed the child was the attackers’ kid as you can see from the racist comments in the video above, in reality, the kid was trying to save mommy from getting killed.

But I’m sure the white girl got labeled as a white supremacist even though that’s clearly not the case.

Video of the victim asking about her baby afterward:

The victim was left with cuts, bruises, a black eye, and swollen face. She was treated at the scene, but refused to go to the hospital in an ambulance.

In any case, this is a hate crime and this woman should answer for it.

The Hate Crimes Reporting Gap is the significant disparity between hate crimes that actually occur and those reported to law enforcement. It is critical to report hate crimes not only to show support and get help for victims, but also to send a clear message that the community will not tolerate these kinds of crimes.

Reporting hate crimes allows communities and law enforcement to fully understand the scope of the problem in a community and put resources toward preventing and addressing attacks based on bias and hate.