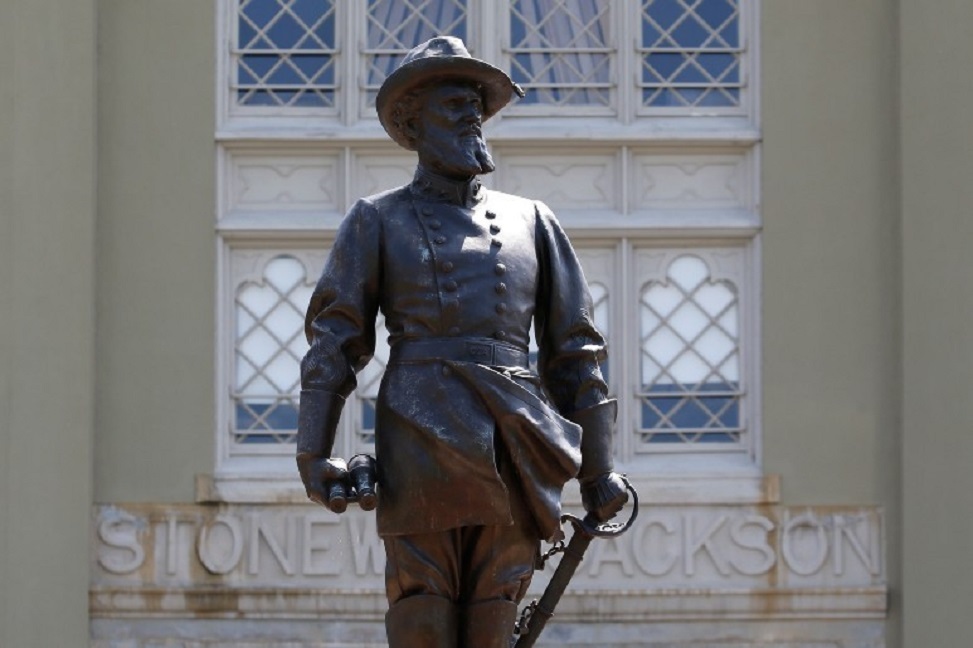 The Virginia Military Institute removed a prominent statue of Confederate Gen. Thomas “Stonewall” Jackson on Monday, a project initiated this fall after allegations of systemic racism roiled the public college.

Around 9:45 a.m., a crane plucked the larger-than-life statue that freshmen were once required to salute off its base and slowly hoisted it to the ground. A small crowd gathered on the mostly empty campus in Lexington where Jackson taught, quietly looking on amid flurries of snow.

The statue was the latest in a long list of Confederate tributes to be removed across the U.S. in the aftermath of the death of George Floyd in Minneapolis and the racial justice movement that followed. The college, which had resisted calls to remove the Jackson statue over the summer, changed course in October after The Washington Post published a story that described an “atmosphere of hostility and cultural insensitivity” at VMI, the oldest state-supported military college in the U.S.

“The history of VMI over the past 181 years is well documented. Stonewall Jackson’s ties to Lexington and the Institute as an instructor are part of that history,” Interim Superintendent Cedric Wins, a retired U.S. Army major general, said in a statement Monday. But “VMI does not define itself by this statue and that is why this move is appropriate,” he added.

The Post’s story, which detailed incidents such as lynching threats and a white professor reminiscing in class about her father’s Ku Klux Klan membership, led to the ouster of former superintendent retired Army Gen. J.H. Binford Peay III and prompted state officials to commit to hiring an outside firm to investigate the students’ allegations.

Peay resigned under pressure from Democratic Gov. Ralph Northam’s office, and Wins became the first Black leader to serve in that role. The school’s board has committed to other changes, including creating a permanent diversity office.

VMI said the statue will be relocated to a nearby Civil War museum at a battlefield where dozens of VMI cadets were killed or wounded. It was to be taken to storage Monday while work continued to remove the pedestal and prepare the new site, school spokesman Bill Wyatt said.

In the wake of Floyd’s death, Black alumni spoke out about racism they said they experienced at the school — including in a story in The Roanoke Times — and a petition was created calling for the statue’s removal.

Peay announced in July that the school would change some of its longstanding traditions, such as relocating an oath ceremony from the Civil War battlefield. But he said it would not remove the statue of Jackson, who owned enslaved people, or rethink the names of buildings honoring Confederate leaders.

“Unlike many communities who are grappling with icons of the past, VMI has direct ties to many of the historical figures that are the subject of the current unrest. Stonewall Jackson was a professor at VMI, a West Point graduate who served in combat in the Mexican War, a military genius, a staunch Christian, and yes, a Confederate General,” he wrote at the time.

Change was also slow to come to VMI in the 1990s, when the school spent six years and millions of dollars in a high-profile fight against federal efforts to force it to admit women.

In 2015, VMI did away with requiring freshmen to salute the statue each time they passed it, Wyatt said.

The statue was given to VMI in 1912 by its sculptor, Sir Moses Ezekiel, VMI’s first Jewish cadet and a veteran of the Battle of New Market, VMI said in a news release. Its removal and relocation to the Virginia Museum of the Civil War and New Market Battlefield State Historical Park will cost $209,000, funds to be paid out of VMI’s facility maintenance and operations account.

Carolyn Worrell, whose late husband graduated from VMI in 1962, was among the handful of people who gathered to watch the work Monday. The school had not publicly disclosed that the removal would be taking place, and Worrell said she hurried over when she got word.

Worrell, who is white, said she didn’t think the Post’s reporting had accurately portrayed VMI, which her son also attended.

“It is the Democratic Party’s power quest that has caused this entire thing. They are vilifying history. They are trying to do away with history,” she said.

In his statement, Wins said it would be an “understatement” to say that the decision to remove the statue had evoked strong opinions on both sides of the issue. He also struck a note of optimism.

“Time and again over the past 181 years, the Institute has adapted and changed. Each time, we have become a better, stronger institution,” he said.