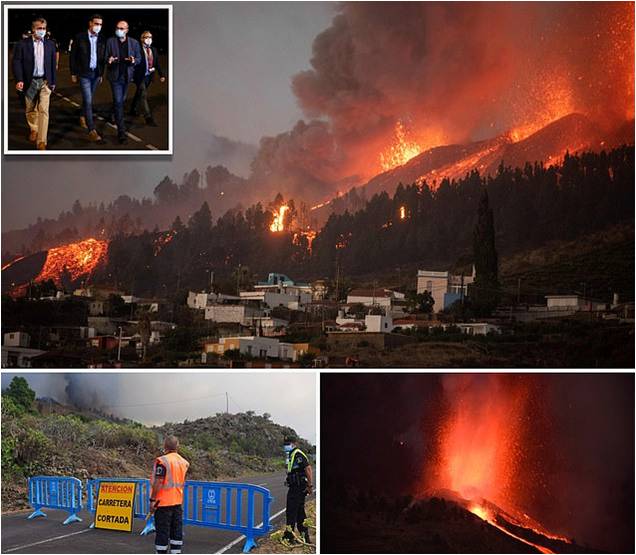 A volcano on the Spanish island of La Palma erupted Sunday after a week long build-up of seismic activity, forcing the authorities to scramble evacuations for more than 5,000 people as lava ran towards their homes.

The explosion took place in an area known as Cabeza de Vaca on the western slope of the volcanic ridge as it descends to the coast, and comes after the island registered up to 1,000 earthquakes in the past five days alone.

Huge red plumes topped with black-and-white smoke shot out along the volcanic ridge that scientists had been closely following due to the accumulation of molten lava below the surface.

Mayor Sergio Rodríguez said 300 people in immediate danger had been evacuated from their homes and sent to the El Paso soccer field as one lava river slid towards the village, while rescue services carried out evacuations of those with mobility issues hours before the eruption.

The volcanic eruption alert has gone from yellow traffic light to red according to the Civil Guard, as the evacuation affects more than 5,000 people from different districts in the municipalities of El Paso, Tazacorte and Los Llanos de Aridane.

Roads were closed due to the explosion and authorities urged the curious not to approach the area.

La Palma, with a population of 85,000, is one of eight islands in Spain’s Canary Islands archipelago off Africa’s western coast, which at its most southern point is just 60 miles from Morocco.

Itahiza Dominguez, head of seismology of Spain’s National Geology Institute, told local TV station RTVC that although it was too early to tell how long this eruption would last, prior ‘eruptions on the Canary Islands lasted weeks or even months.’

The last eruption on the Canary Islands occurred underwater off the coast of El Hierro island in 2011 which lasted five months.

Earlier this week, Spain’s National Geographic Institute detected 4,222 tremors in a so-called ‘earthquake swarm’ in the national park around the volcano, with over 1,000 of them registering as earthquakes.

The Canary Island’s regional government on Tuesday put the island on a yellow alert for an eruption, the second of a four-level alert system.

The British government issued a warning to Brits expecting to go on holiday to the island on Sundayevening: ‘On Sunday 19 September 2021, at approximately 15.15 local time, there was a volcanic eruption on the Spanish Canary Island of La Palma. The immediate area of Cabeza de Vaca, El Paso has been evacuated.’

‘If you are in an affected area you should follow the advice of local authorities, including social media updates from Cabildo de La Palma. If you are planning to travel to the island imminently you are encouraged to contact your tour operators and airlines.’

After days of tremors and small earthquakes, authorities on La Palma had already started to evacuate residents with reduced mobility on Sunday morning shortly before ground broke open.

The area near the southern tip of the island where the ridge is located is sparsely populated, but residents of the five nearby villages had already been told to be on alert and ready to leave their homes in case of an eruption.

A 3.8-magnitude quake was recorded before the eruption as vibrations from the seismic activity were felt on the surface.

The Scientific Committee of the Volcano Risk Prevention Plan said stronger earthquakes ‘are likely to be felt and may cause damage to buildings.’

The committee of experts also noted that a stretch of the island´s southwest coast was at risk for landslides and rock falls.