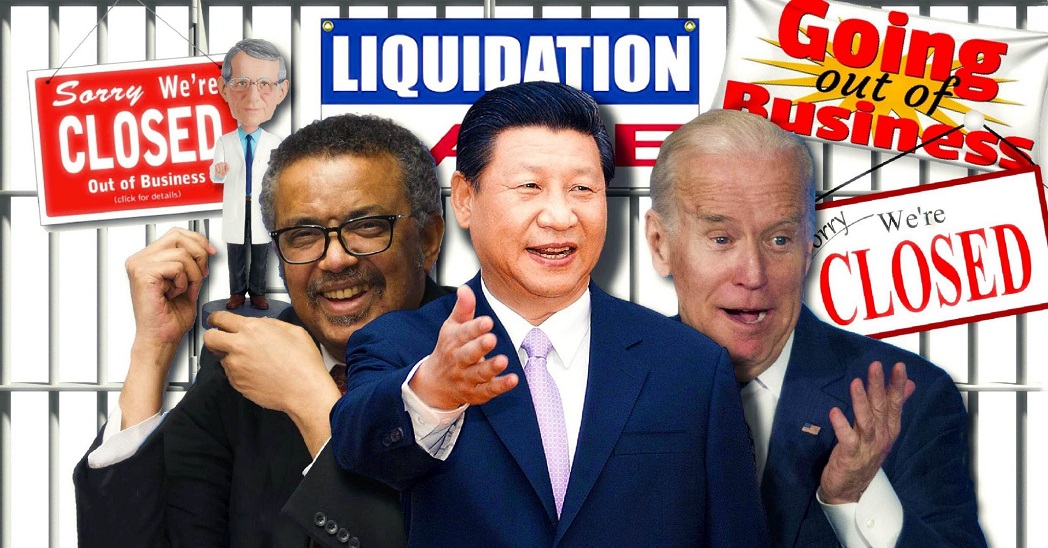 Informed consent isn’t possible when the opinions of renowned experts are being censored by those who control which voiced we get to hear.

Way back in July of 2020, It was reported on the thousands of doctors and scientists desperately trying to get the word out that Anthony Fauci’s program of economic ruin and crippling social isolation had no scientific justification whatsoever.

Yet, to this day, the media and tech giants have managed to keep most of the public in the dark about the existence of any dissenting opinions on the wisdom of an historically unprecedented “public health” strategy that’s rained down more misery and death on the American people than our worst foreign foes could have imagined but, coincidentally, has turned out to be a financial windfall for tech giants and multinational corporations like Facebook and Amazon.

And, speaking of foreign enemies, only a tiny percentage of Americans know that the whole idea of locking down in response to a respiratory virus had never been so much as suggested in all of history until China’s Communist Party rulers started pushing it on the rest of the world in 2020.

Just five months before lock down was imposed, the World Health Organization had soundly rejected even the much weaker pandemic-mitigation strategy of quarantining symptomless people with a history of exposure.

If any of the above crucial facts had been widely reported, no one in their right mind would have consented to the madness of lockdowns.

Now that the subject of relentless government and media propagandizing has switched from lockdowns to vaccines, however, the censorship of dissenting expert voices has been ramped up accordingly.

You’ve probably never even heard of Harvard University’s Dr. Martin Kulldorff, one of the world’s most cited epidemiologists and infectious disease experts.

And it’s next to certain that you’ve never heard of the document eviscerating the madness of lockdowns that he and over 55,000 other scientists and medical professionals have signed onto — the Great Barrington Declaration.

Since its publication on October 4, 2020, The Great Barrington Declaration has been signed by over 55,000 medical practitioners & scientists. Thanks to media & big-tech censorship, it’s questionable whether that many Americans have ever even heard of it. pic.twitter.com/r3wNDMYJKg

Besides being a world-renowned expert, Kulldorff is also a member of the COVID-19 vaccine safety subgroup that advises the CDC, FIH, and FDA. And, to give you an idea of just how far those who control the flow of information are willing to go to make sure you don’t hear anything they don’t like, the censors at Twitter have had the temerity to actually label a post in which he recommended vaccination for high-risk people but advised against the wisdom of healthy people taking a one as “misleading.”

When making unscientific claims, media often refer to “health officials” or “experts” without citing anyone. I challenge @Twitter to name vaccine experts believing that everyone, including children and those with prior immunity from natural infection, MUST be Covid vaccinated. pic.twitter.com/tYhCjdKzgf

Users were also prevented from liking or retweeting this opinion on COVID-19 vaccines from a Harvard epidemiologist who officially advises the CDC, FIH, and FDA on vaccine safety. Take some time to let that sink in, because it’s going to get a lot worse.

Former Pfizer VP, Dr. Mike Yeadon, also signed on to the Great Barrington Declaration. As Pfizer’s chief science officer, Yeadon was also in charge of all of the firm’s research and development. Towards the end of last year, however, Twitter started censoring Dr. Yeadon’s posts on COVID-19.

Dr Mike Yeadon is an eminent scientist & former CSO & VP Respiratory Disease Research for Pfizer. He is not political.
Twitter removes his factual tweets. This is what you should be worried about regardless of your political tribalism!#BigTechCensorship #ElectionResults2020 pic.twitter.com/21hG1mWLK4

Youtube even censored an informational video Dr. Yeadon did, though they later put it back up.

The Yeadon video that has been censored, removed & reappears…https://t.co/i0gDizjShQ

Watch Dr. Yeadon’s video while you can, because the tech giants are ramping up their censorship of the distinguished former head of R&D at Pfizer. In February, Twitter permanently suspended his account.

And, of course, the media’s descent into undisguised propagandists for whatever it is that Anthony Fauci happens to be saying today, means that almost no one knows about any of Dr. Yeadon’s other chilling observations.

In November of 2020, Dr. Yeadon and 22 other renowned scientists published a report eviscerating the first and most widely used test for COVID-19 as fraudulent science and demanded that the paper validating it — which was published a day after it was submitted and, hence, couldn’t possibly have been subjected to peer-review — be retracted.

Pieter Borger, PhD; Rajesh Maholtra, Michael Yeadon, PhD and 22 other scientists call for the retraction of the Corman-Drosten Paper/flawed PCR protocol. Cycle thresholds >35 have only 3 percent probability of being correct.

Let that sink in as well.

Almost two dozen respected researchers including the former head of R&D at Pfizer have been claiming since November that the COVID-19 test used to generate the case and death numbers that convinced us to accept lockdowns is the product of systematic scientific fraud and completely worthless.

And you’ve heard nothing about it.

Just last week, Dr. Yeadon did an interview with the group America’s Frontline Doctors — another organization the media and big tech have mercilessly silenced for dissenting on the wisdom of Fauci’s destructive policies — in which he advised against anyone at all taking a COVID-19 vaccine in the starkest possible terms.

He was Pfizer’s VP of research.

So when he says this, maybe you oughta unplug your ears & & quit w/ the delusional “It couldn’t happen here”https://t.co/0c7MK3SEkZ pic.twitter.com/Zg8kUun1bv

I could go on for days on the number of prominent voices that you’ve probably never heard of who’ve categorically rejected what the media has shamelessly presented to you as the “scientific consensus” on COVID-19. But let’s close with that.

A scientist so esteemed that Pfizer put him in charge of all their R&D is saying that no one ought to take their so-called “vaccine” because it’s both unnecessary and insufficiently tested for safety. Indeed, he finds himself so shocked that the product is even being marketed, that he believes it’s not impossible that the whole point is to kill us and asserts that he has “absolutely no doubt that we are in the presence of evil (not a determination I’ve ever made before in a 40-year research career) and dangerous products.”

Yet you’ve never heard a word about it as Anthony Fauci makes the round on Sunday talk shows urging you to run out and inject your children with this stuff as soon as possible.

Perhaps, Mike Yeadon — who’s about as an esteemed private-sector researcher as you could possibly find — is wrong, and Anthony Fauci — who’s spent his entire career in the federal bureaucracy — is the one telling the truth here.

If the Nobel Prize-winning inventor of the process used to test for COVID-19, the late Kary Mullis, is to be believed, however, the prospects are pretty damned slim.

The late scientist Kary Mullis, Nobel Prize for inventing PCR, had this strong opinion about the professional ethics and scientific competence of Anthony Fauci. I would side with Mullis on this question. pic.twitter.com/lFdI2plQV4

But the point here isn’t which experts are wrong and which are right. The point is that a systematic effort is underway to bury the existence of the mind-numbing number of renowned scientists who vehemently disagree with Anthony Fauci’s ever-changing demands.

They’re trying to keep you from making up your own mind.

Which may itself be the best possible indication of whom you ought to trust with your life.