Who was Behind the January 6 Events? 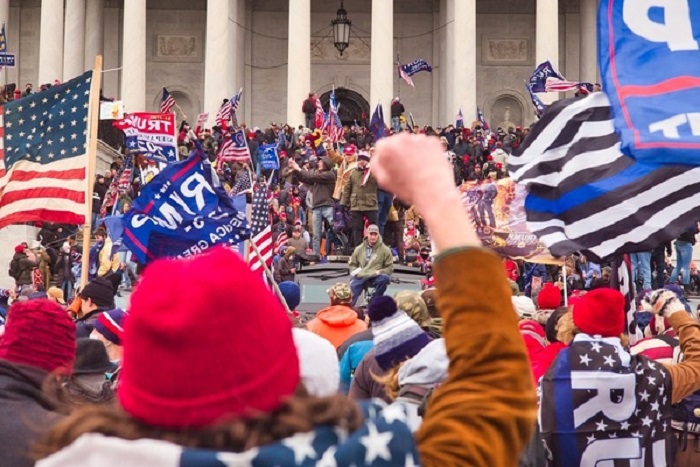 The current anti-Trump and anti-MAGA witch-hunt is not about 2024.  The Democrat DoJ is safe for two more years.  It is about January 6, 2021.  The target is not so much Trump as the idea that electoral votes could be legally contested on the joint session of Congress.  Obviously, the DoJ violates core freedom of speech.  It also ignores the clear letter and spirit of the law regarding the joint session for Presidential elections.  3 U.S. Code § 15 – Counting electoral votes in Congress clearly provides for raising and debating objections against “all the certificates and papers purporting to be certificates of the electoral votes.”

In the session that commenced on January 6, Trump had a significant chance to be certified as the winner of the 2020 election. Further, it was his only chance. Neither Trump nor any group of Trump supporters wanted a violent disruption of this session. For this reason, such a disruption was in the interests of the Democrat Party.

The narrative that Trump supporters stormed and breached the Capitol appeared in the media in the first minutes of the violence. It was sustained by multiple lies fabricated on that day and on the following days.  Since then, many of those lies have been exposed, and previously hidden facts have been uncovered.

Moreover, the partisan DoJ/FBI investigation of the January 6 events have found no coordination behind the Capitol breach nor any arms, plans, or means to breach the Capitol or to disrupt the joint session.  Only the leads toward Trump/MAGA have been investigated.

Most of those arrested were charged with trespassing or other infractions.  The most dangerous weapon — a spear — was carried by actor Jacob Chansley, a long-time performer of a QAnon Shaman character.

Only 1,500 unwanted visitors entered the Capitol on January 6, the vast majority of whom were ordinary men and women allowed by the Capitol police (USCP).  The USCP had nearly 1,300 armed officers, more than enough to protect the Capitol building against a few hundred (or fewer) unruly protesters.

With the currently available evidence, the narratives of insurrection and pro-Trump mob storming the Capitol, led to a conclusion like this: a man with horns and a spear, accompanied by a few hundred unarmed civilians, stormed and breached the U.S. Capitol, and caused the congresspersons to flee and hide.  Yet, Democrats like to compare January 6 to the War of 1812, when Washington D.C. fell to the army of the British Empire.

Thus, these narratives are wrong. Moreover, the Capitol was not breached — the USCP stopped defending it and opened the doors.

The key people overseeing the safety of the Capitol building before and on January 6 were radical Democrats or their appointees: D.C. mayor Muriel Bowser and her appointees MPD Chief Robert Contee and DHS Coordinator Chris Rodriguez; House Speaker Nancy Pelosi (this position includes responsibilities of mayor of the Capitol, if there were one), Senator Amy Klobuchar, and Representative Zoe Lofgren. Nancy Pelosi had had overall responsibility for the Capitol police since January 2018.

Prior to January 6, Trump had offered to D.C. the services of 10,000 National Guardsmen.  The above-mentioned Democrats rejected the offer.  On January 5, Mayor Bowser and Senator Chris Murphy (D-CT) separately wrote nasty letters to the heads of the DoJ and the DoD as well as Secretary of the Army Ryan McCarthy, demanding that neither the National Guard nor any uniformed federal units (including special forces, such as the FBI’s Hostage Rescue Team and about a dozen others) should deploy to D.C. on January 6 without Bowser’s permission and in accordance to Schumer-Murphy conditions.  These legally dubious but politically effective letters prevented timely reinforcement of the Capitol police.  On January 6, when requested by the USCP, MPD Chief Contee provided only approximately 100 police officers out of a potential force of more than 3,000. Democrats engaged in other maneuvers that handicapped protection of the Capitol building on January 6; nonetheless, President Trump was ultimately blamed.

The operational command of the USCP on January 6 was in the hands of Democrat favorites Yogananda Pittman and Sean Gallagher. They did nothing to defend the Capitol, per a letter written by a former Capitol police officer.  Ms. Pittman also ordered the Senate and the House dispersed, despite objections of Republican Senators.

Only after dispersing the joint session of Congress and gaining armed control of the Capitol building did the Democrats allow in the National Guard and significant numbers of MPD. Then they had the Congress to immediately resume the joint session, although the law is clear that if this session is put in recess, it can resume only next day at 10am (§ 16).

Since then, we have learned that the FBI WFO have been lying and hiding evidence about the reported pipe bombs, which conveniently disrupted the work of the RNC but not the DNC.  The FBI WFO has framed an innocent person.  This fact alone suggests that those who planted the bombs were affiliated with Democrats.

In connection with January 6, 2021, the Democrat DoJ holds dozens of people detained without trial.

The hypothesis that the Democrat party and its allies are behind storming the Capitol, violent disruption of the joint session, and its improper resumption and conclusion deserves more consideration.

One thought on “Who was Behind the January 6 Events?”