Why Sidney Powell gets the Galileo treatment 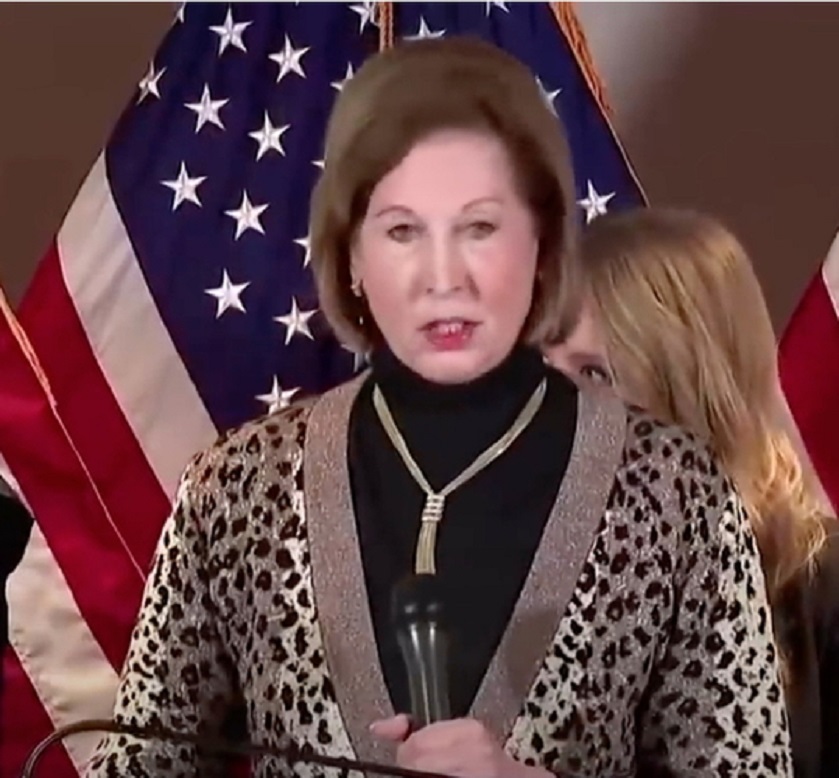 Observers of human history might have to go back all the way to Galileo to find a ruling class as determined to cancel someone as much as today’s is to cancel Sidney Powell in response to her single-minded devotion to bringing the truth of the full scale of the 2020 election fraud to light.

Galileo broke the news/discovery that the earth wasn’t the center of the universe, and in fact revolved around the sun, and that just didn’t comport with what the ruling class, including church authorities, were prepared or willing to accept.  Galileo rocked their world — probably deeply threatening their hold of authority over the masses if they were exposed as so fundamentally wrong — so their solution wasn’t to deal with the truth but to put Galileo under house arrest and demand that he renounce his discovery.

The American ruling class of 2020 is bizarrely opposed to allocating any oxygen to what Sidney Powell has discovered and is alleging about Dominion Voting Systems (and others), about vote-shifting algorithms and partial decimal vote counts, and about vote manipulation showing up throughout the country.  Even Rudy Giuliani, the President’s attorney, and Mark Meadows, the President’s Chief of Staff, seem hellbent on publicly keeping their distance from Powell — and on keeping President Trump from getting too close to or aligned with Powell.

Other elements of the ruling class — such as SCOTUS and much of the rest of the federal judiciary — won’t even look at the evidence Powell has assembled.  They just ‘don’t want to go there’, and so they make up legal excuses — e.g., lack of standing — and wave off the substance of the allegations.

What gives?  Why are they behaving this way?

Common sense says election integrity is fundamental to the survival of democracy in any form, so if there are reasonable grounds for suspicion, why wouldn’t serious adults want to turn over every rock to determine the truth?  If the ruling class is so eager to pronounce Sidney Powell a lunatic fringe conspiracy theorist, why wouldn’t they want the Dominion voting machines fully audited so they can prove once and for all that Powell is crazy and deserves to be mocked and ignored?

Many people in the Dallas, Texas area have been struggling with these ‘what gives?’ questions since at least 2018, when the mid-term election results had an immediate smell of having been rigged.  Yet Texas law enforcement authorities — by reputation so pro-law and order — refused to investigate.

There seem to be three possible explanations for the behavior of the ruling class, and none of them are good.

The first and probably worst is that many on both sides of the political aisle may be in on the fraud.  Rigged elections are an equal opportunity enticement to many if not most politicians.  There would be no desire on the part of anyone in on the fix to encourage any investigation that might ruin the fix for everyone.

Aligned with this explanation is the internet speculation about the remarkable election wins of RINOs and quasi-Never-Trumpers Mitch McConnell, Lindsey Graham and Susan Collins (and even of moderate, no charisma John Cornyn, whose vote total implausibly exceeded Trump’s in Texas).

All won big despite enormous opposition campaign spending and beat expectations and polls by a sizable margin — in the same election President Trump supposedly lost to a senile old man who couldn’t draw 200 people to any campaign event (and still can’t draw flies to his speeches from the “office of the President-elect”).

These Senate results may not scream fraud to the same degree the Trump/Biden result does, but they have an odor about them.  Yet they reconcile pretty quickly — though to be clear, still hypothetically — if in exchange for unified post-election effort to dismiss the seriousness of election fraud and help usher Trump out of the White House, they were promised re-election, and with margins that might scare off for at least one election cycle the most credible future challengers. (Outraged by the hypothetical?   Then let’s audit the machines and put hypotheticals to rest.)

The second explanation for the ‘what gives?’ is fear and intimidation.  Election fraud on a national scale in the United States of America is the ultimate high stakes global power play.  As is repeatedly noted at the Conservative Treehouse, ‘there are trillions at stake’.  The players are beyond nasty; nothing is out of bounds for the sake of acquiring or holding on to global power.

In this scenario, all it would take is a few threatening calls at the right time to a weak officeholder or judge (or their family members) — and the quick result will be votes or rulings that there shall be no audits of voting machines, or simply dismissals of lawsuits on procedural grounds that permit the evidence to be ignored.

The third explanation is a variant of Galileo’s experience:  the conclusion that follows from the evidence Sidney Powell has put together is so devastating to Americans’ view of how their country is supposed to be governed that it simply can’t be given voice or visibility.  The truth would shock Americans into a complete loss of faith and trust in their government.  The truth would so rock our world — that we’re all being lied to and manipulated so constantly and in so many ways — that we’ll cease to function in any manner resembling law and order.  Under such circumstances, the ruling class would have determined that Americans ‘can’t handle the truth’…so they can’t be allowed to know the truth.

It’s easy to see how this explanation can hold together, even in the face of overwhelming circumstantial evidence of election fraud:  ‘experts’ just raise the evidentiary bar of ‘proof’ so high that it can never be met — i.e., unless Sidney Powell can produce Dominion/Smartmatic source code written not in programming code but in bold-font, all-caps English that says “FLIP VOTES FROM TRUMP TO BIDEN HERE”, then the same experts can solemnly announce that the circumstantial evidence is just not enough proof to justify remedial action.

The American people already know what happened in the 2020 election, because they watched Trump haters in action over the last 4+ years.  They saw the Russia collusion hoax; they saw the sham impeachment; and they increasingly see pandemic protocols utterly untethered to science but transparently connected to straitjacketing the American people with a globalist Great Reset imposed by an unelected ruling elite, with the same pattern of lies and liars that brought about the hoax and the impeachment.

A stolen election in 2020 therefore isn’t a shocking aberration; it’s an obvious continuation, a culmination of the ruling class determination to get rid of an outsider who threatened to ‘reset’ America back to its original design — a nation governed not by a hierarchy of ruling elites, but by ‘we the people’.

All three explanations for ignoring or dismissing the evidence of election fraud are plausible, and they are not mutually exclusive.  And they all point to the over-arching challenge of these times:  is there sufficient courage among the American people to demand the truth?

Sidney Powell has the requisite courage.  The coming days, weeks, months (years?) will answer whether enough other Americans of this era are up to the challenge.  If there are, we believe they can force their government to live by the truth.

As President Trump might say, “We’ll see what happens”.