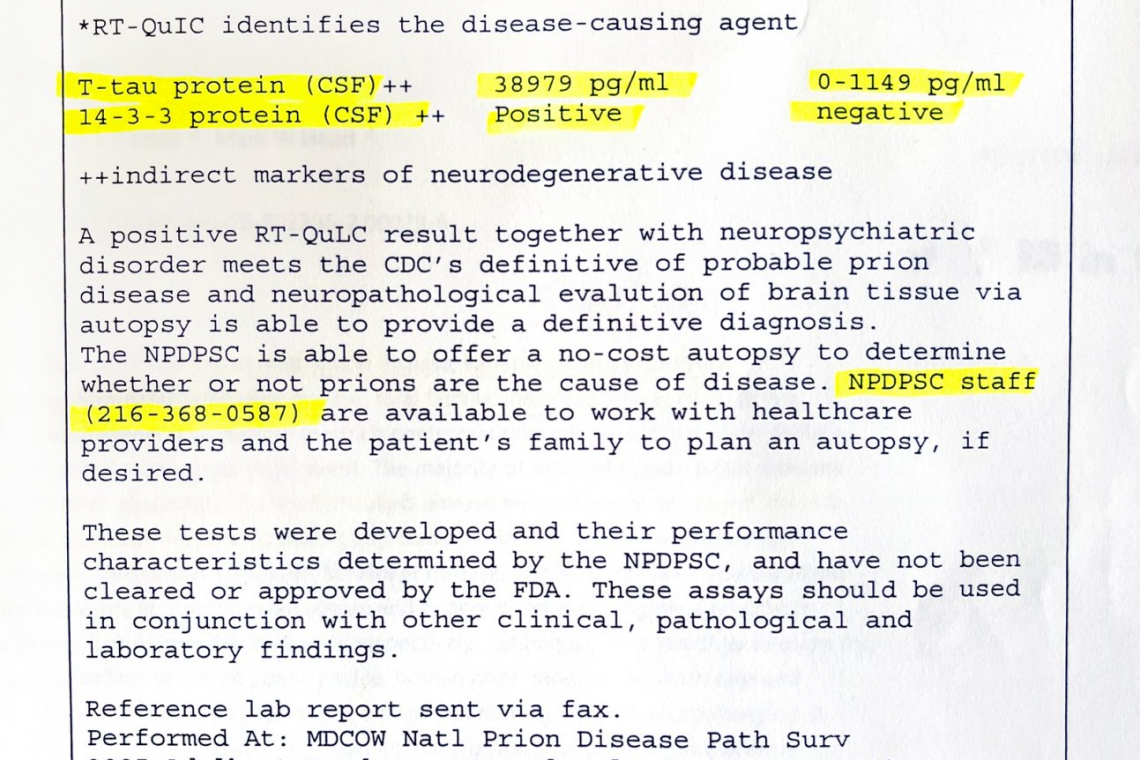 Gianni said her mother received the first dose of Pfizer on April 5, and her second dose on April 25.

On May 6, Cheryl experienced her first episode indicating “something was neurologically wrong,” Gianni explained. “She had extreme brain fog and confusion. She couldn’t remember where she was driving, and got really scared.”

On May 31, Cheryl called 911 because she was experiencing a severe headache. She was taken to Nordstrom Medical Center in Homestead, Florida, where she was hospitalized for 10 days.

“She got taken to this hospital and I don’t know what they considered it, but they kept her for 10 days and released her home. She was in a very very bad state. She said, ‘Hey, I don’t know where I am.’

“My mother had mass confusion and brain fog. She could not do simple things and something wasn’t right. We had to have round-the-clock care with friends and families, thinking this was something that needed to be detoxed from her system.”

Gianni, who at the time did not know Cheryl had been vaccinated, said her mother’s condition grew progressively worse.

“She went from being able to work and do normal everyday activities to being able to do only basic things,” Gianni said. “Before she was vaccinated, she had her own apartment and worked every day as a sales representative. She cooked, cleaned and was in a great place in life.”

Around June 19, Cheryl experienced another severe headache, which became so bad she felt her head was going to explode, so she went to the emergency room and was admitted to the hospital, her daughter explained.

“A few days later, I visited her in the hospital and I couldn’t believe my eyes,” Gianni said. “She couldn’t walk, spoke in broken sentences, wasn’t making much sense, had uncontrollable body movements, was trembling and unable to be still.”

The daily regression was rapid. “It was mind-blowing, confusing and truly heartbreaking. Watching her brain have no control was hard,” Gianni said.

At first doctors couldn’t find anything medically wrong with Cheryl other than a slightly elevated white blood cell count, Gianni said. But then MRI imaging of the brain showed evidence of prion disease, prompting doctors to immediately perform a lumbar puncture — which ruled out acute infection, tuberculosis, syphilis, multiple sclerosis and other diseases.

On July 12, a second lumbar puncture came back positive for CJD — a prion disease. Cheryl’s tau protein value was 38,979 pg/ml, while the spectrum for CJD positive patients is 0 – 1,149.

Cheryl was hospitalized for a month before she received her diagnosis of CJD. During that time “it was literally like watching something eat her brain alive,” Gianni said. “While shaking, she managed to get out the words, ‘This is fucking stupid.’”

Gianni said she was surprised when she found out her mother had been vaccinated, as she comes from a family of un-vaxxers. She believes like many Americans, her mother felt pressured to get vaccinated because of her job and the media pressure.

On July 19, Cheryl was discharged to hospice, where she died on July 22.

“We didn’t know what to do,” Gianni said. “It’s fatal. There’s no repairing what was going on. It’s like fast-acting dementia. It was a really sad thing, so scary, so insane and something [her] doctors hadn’t seen before.”

Children’s Health Defense covered this story and reported it on their web site “The Defender:”:

Gianni said her mother’s medical team said the onset of CJD could be tied to the COVID vaccine. Dr. Andrea Folds, one of the internal medicine physicians from Adventure Hospital who oversaw Cohen’s case, wrote a case report, which will be submitted Sept. 2 to American College of Physicians Journal.

In a written statement to The Defender, Folds said:

“This case identifies potential adverse events that could occur with the administration of the novel COVID-19 vaccine. Moreover, clinicians need to consider neurodegenerative diseases such as prion disease (e.g. sporadic Creutzfeldt-Jakob disease), autoimmune encephalitis, infection, non-epileptic seizure, toxic-metabolic disorders, etc. in their differential diagnoses when a patient presents with rapidly progressive dementia, particularly in the setting of recent vaccination.

“Although there is currently no cure for sporadic Creutzfeldt-Jakob disease (sCJD), early diagnosis is crucial to avoid the unnecessary administration of empiric medications for suspected psychological or neurological disorders.

“Furthermore, tracking adverse events could potentially lead to further characterization and understanding of both the novel COVID-19 messenger ribonucleic nucleic acid (mRNA) vaccine as well as the etiology of sCJD. More importantly, recognizing adverse effects provides individuals with vital information to make a more educated decision regarding their health.”

Prior to Cheryl’s diagnosis, Gianni said another doctor had mentioned someone who had come in with similar symptoms, had been vaccinated, developed a rare disease and was also released to hospice.

Gianni said no autopsy was performed because the cause of death was confirmed as CJD.

Gianni said the Creutzfeldt-Jakob Disease Foundation is also aware of her mother’s case but hasn’t updated cases on its website since 2019, making it difficult for others to draw correlations between any arising CJD cases and COVID vaccination, Gianni said.

As The Defender reported July 21, a paper published in February outlined the potential for messenger RNA (mRNA) COVID vaccines to trigger development of prion diseases and related diseases like Alzheimer’s, Parkinson’s, amyotrophic lateral sclerosis, multiple system atrophy and others.

According to the paper’s author, immunologist J. Bart Classen, one-time National Institutes of Health (NIH) contract scientist and proprietor of Classen Immunotherapies, he based his conclusions on analysis of RNA from the Pfizer injection. He did not have enough information on Moderna.

Classen determined both vaccines had the ability to induce prion disease, and the results of the study were consistent with monkey toxicity studies showing infection with SARS-CoV-2 results in Lewy Body formation –– clumps of abnormal protein particles that accumulate in the brain.

“The findings suggest that regulatory approval, even under an Emergency Use Authorization, for COVID vaccines was premature and that widespread use should be halted until full long-term safety studies evaluating prion toxicity have been completed,” Classen wrote.

It often takes years for abnormal folding of certain proteins to produce prion disease, but Classen suggests COVID vaccines could be accelerating disease progression in individuals who either already have subclinical prion disease or have mild prion disease that has not been properly diagnosed.

Because the spike protein can so quickly set abnormal protein clumping into motion, Classen speculates this “could allow fairly rapid detection of prion disease after immunization.”

At the same time, Classen cautioned flawed adverse event reporting systems will likely fail to capture neurodegenerative diseases that take more time to develop. Most vaccine adverse event reports are for acute events, Classen said, whereas few of the adverse events that occur “years or decades after administration of a pharmaceutical are ever reported.”

For these and other reasons, Classen suggests the clinical relevance of his findings “could be logs in magnitude higher” than the Parkinson’s signal he detected through his research.

Children’s Health Defense asks anyone who has experienced an adverse reaction, to any vaccine, to file a report following these three steps.