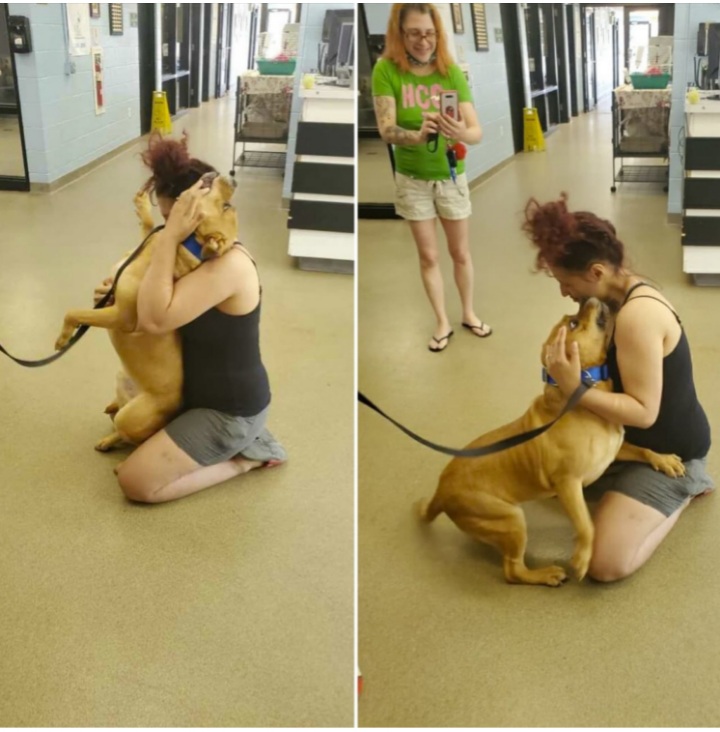 A Pennsylvania woman had a sweet reunion with her lost pup after over two years apart.

Aisha Nieves from Allentown, Pennsylvania, was recently searching for a new dog for her two sons and decided to look at the Lehigh County Humane Society’s (LCHS) adoption webpage. She immediately noticed that a tan pit bull-Rottweiler mix up for adoption at the shelter was the same beloved dog she lost a few years ago.

“I thought, ‘Wait, that can’t be him,'” Nieves told The Morning Call. “Then, I saw the little scar over one eye, the scar from when he got caught in a gate, and I was like, ‘Oh my God, that’s my baby, that’s Kovu!'”

Nieves first adopted Kovu, who the LCHS listed on their adoption site as “Ash,” when the canine was just 7 weeks old. Kovu lived with her until he went missing in May 2019. Weeks later, he was found by the LCHS in bad health.

“He needed to be treated for fleas, was missing hair on his hind end and had inflammation,” LCHS director of development Deirdre Snyder told the outlet. “He was treated with antibiotics and bathed with a special medical shampoo. He was in our shelter for about four months and then adopted out to a family Oct. 25, 2019.”

However, Kovu was returned to the shelter earlier this month because the family who adopted him was facing eviction. After seeing her lost dog online, Nieves immediately called the shelter to verify she was Kovu’s original owner and reunite with the pup.

According to The Morning Call, Nieves said that at the reunion, “He was screaming, trying to get away from the guy holding him and run to me. Then, he just jumped on me, and we started kissing and hugging. He sat on my lap. I told him, ‘Yeah, buddy, you’re going home. I’m so sorry this happened. Never again am I losing you.'”

“Dogs have an incredible sense of smell, and that is likely the first thing that brings the recognition,” Snyder added, explaining it’s not unusual for a dog to recognize their owner after a long period of time. “There are many videos online of military personnel coming home after a long time away and their dog will recognize them with a similar joy and excitement that Kovu had for Aisha.”

After the emotional reunion, Kovu is now home with Nieves and her family, looking forward to celebrating his seventh birthday this winter.