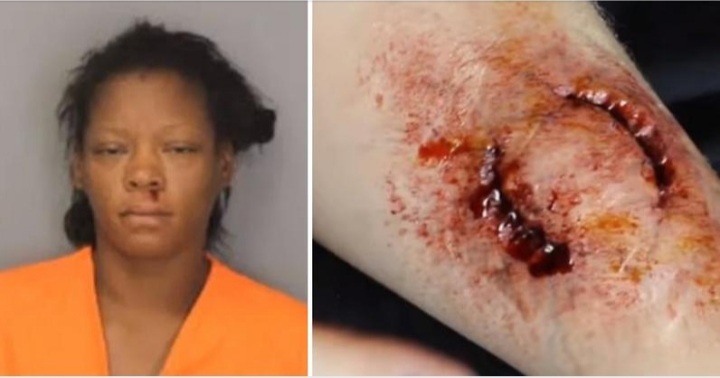 After a woman was pulled over during a routine traffic stop, she tried to flee. As the officer caught up with her, rather than going down quietly, she viciously bit his arm before giving a dire warning. Blood tests have since revealed the disturbing truth.

Dayton Smith, a 38-year-old woman from Memphis, Tennessee, took a bad situation and made it worse when she was pulled over while driving a 2007 Chrysler 300. During what should have been a simple traffic stop for expired tags and driving on a suspended license with no proof of insurance, she tried to flee because she had marijuana, crack, and cocaine inside her car.

After Smith was arrested and placed in the back of a squad car, she proceeded to bang on the police cruiser’s windows, asking officers if she could use the bathroom, according to WREG. It was while officers were addressing her toileting concerns and telling her she needed to wait that she tried to escape from police custody by running away. But, that’s not the worst thing she did by far.

When officers caught up with her, Smith was taken to the ground. That’s when she decided to attack an officer, biting his arm during the struggle and breaking his skin. She also “had her keys between her fingers and was swinging at the officer,” according to the affidavit, The Commercial Appeal reported.

Sickeningly, Smith was seemingly proud of her feat. As she was being treated for injuries sustained during the struggle, she proclaimed to medical professionals that she was HIV positive, according to WMC. This meant she had possibly given the officer a death sentence for doing his job when she bit him and drew blood — terrifying news for him to hear, to be sure.

The officer was taken to a local hospital, where he was treated for the bite wound and possible exposure to HIV before being released. As Smith faced a long list of charges, the criminal exposure to HIV charge was dropped, however. As it turns out, the criminal’s test results exposed a disturbing truth. Smith’s labs came back negative for HIV. Dayton Smith had lied, making an officer believe his life was at risk.

While it’s surely a relief to know he wasn’t actually exposed to HIV, that doesn’t make what this woman did any less heinous. As he waited for those results, he had no idea whether he would live or die a long and excruciating death that would affect the way he lived the rest of his life. Imagine for a moment if he’s married. What a blow this news would have been to his relationship before finding out it was all fabricated by a sick and disturbed woman. Not to mention, the medications for HIV exposure, which should be started immediately, can have nasty side effects on your body.

Although prosecutors dropped the criminal exposure to HIV charge, Smith’s other charges still stand. Those include violation of vehicle registration law, violation of financial law, driving while license suspended/revoked, resisting official detention, two counts of aggravated assault, two counts of possession of a controlled substance, and possession of cocaine with intent to manufacture/sell/deliver.

Dayton Smith was thrown behind bars where she belongs, jailed on a $50,000 bond. Hopefully, that’s where she stays for a very long time. This woman has no place in a civilized society. Sadly, she’s one in a million — and it’s our law enforcement officers who have to deal with such degenerates on a daily basis, hoping to keep the rest of us safe from them.