Word Directly from La Palma: Steam Coming out of ground on other side of island; near constant earthquakes. We’re frightened 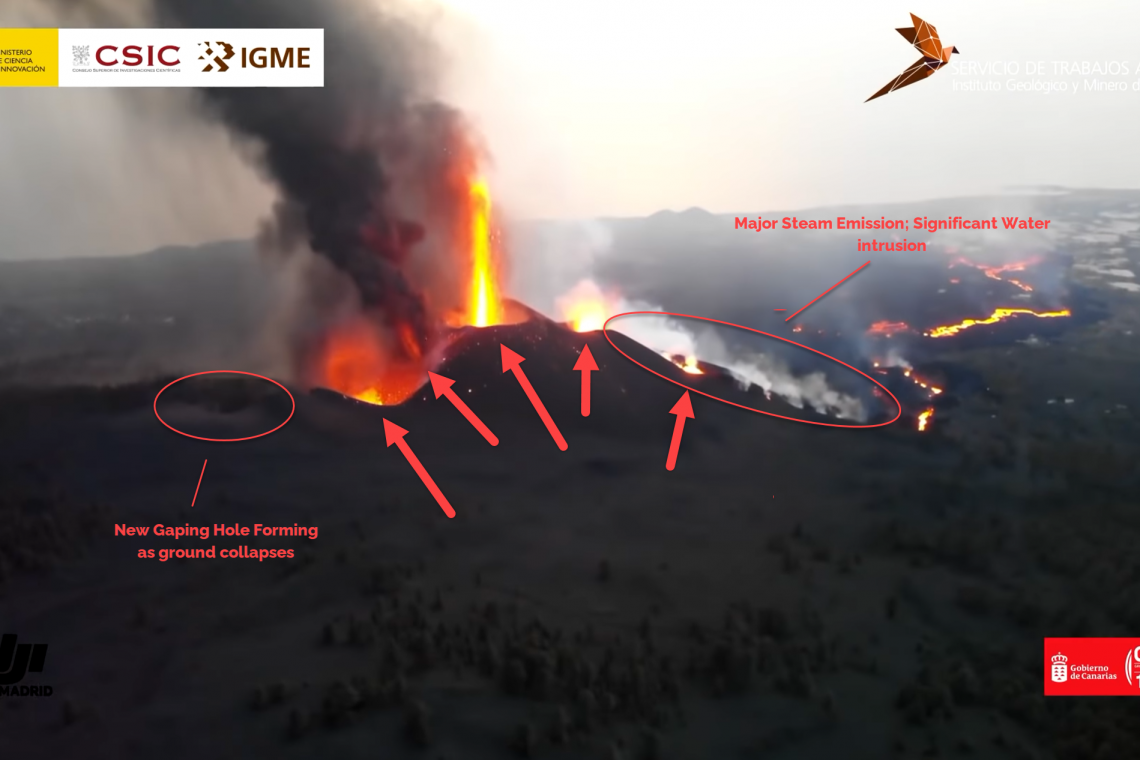 Word is coming out about the ongoing volcano eruption, directly from people on the island of LaPalma, Canary Islands, Atlantic Ocean, off the northwest coast of Africa and it is not good.

One resident writes “We are on the other side of the island from the volcano and steam is coming out of the ground here!  Areas of ground are showing 8+ inches of lift, earth quakes are minutes apart, over 110 since midnight, never ending low shaking. For the first time, we’re frightened.”

Yesterday, this web site reported that a total of FIVE vents were now open and spewing lava on the volcano, a major increase if activity as seen below:

Today, we can show that a new, gaping, hole is forming to the left of the left-most vent:

The photo above also shows the marked increase in steam (downslope to the right) emanating from the ground, proving that a significant source of water is now intruding into the volcano.  This steam is a new development.  It has not really been seen in this area throughout the long lava flow.  Where it came from and how much more is involved, is a huge question.  Enough water could cause a gigantic steam explosion.

Clearly the situation on LaPalma is worsening.

People on the U.S. east coast are URGED to pay close attention to developments there, because if things go to their worst, a slab of unstable land, the size of Manhattan Island New York City, is already slipping off the southwest flank of this island, and may slide into the Atlantic Ocean.

If that happens, a Tsunami will be generated that scientists say can hit the US east coast seven to eight hours later, with 30 meter to 50 meter waves crashing ashore.  Those would be waves about 100-164 FEET tall!

They would wipe out most of the major cities on the US east coast, and smash the United States economy back to almost the Stone Age, for decades.

The Federal Emergency Management Agency (FEMA) did a study on this potential disaster and their study asserts they can expect sixty-five MILLION dead from such an event.

YOU don’t want to be one of those.

Have your car gassed up.  Have a plan about WHERE you would evacuate to and how you would get there.  Have an ALTERNATE ROUTE in case the first way is blocked.  Have a “Go-Bag” for each member of your family, pre-packed with clothes, underwear, socks, belts shoes, deodorant/soap/shampoo, toothpaste and any medicines you need.

If you hear that the landslide has taken place and a Tsunami is actually on its way, LEAVE IMMEDIATELY.  Don’t wait for government to tell you because once the government tells the masses, it will be chaos.

You know how traffic is at rush hour; you can’t move.   Now try to imagine it’s not just people getting out of work, but rather EVERYONE fleeing for their lives.   It will be instant grid lock.

People will go berserk; it may turn into a Mad Max situation on the roads as terrified people drive over, under, and through anything in their way.

You don’t want to be stuck in that.  So leave immediately once you hear a landslide happened, and hopefully, you’ll reach safety long before the masses panic.

As the sun was setting on LaPalma Friday evening, TV cameras suddenly picked up what appears to be a burst of STEAM emanating from the ridge, above and to the south of the present eruption.

This ridge is part of the old volcano system which erupted in 1949 and again in 1971.  Here is what could be seen on the TV camera:

It is not known if this is steam or a rogue cloud coming over the ridge.  The sky has been mostly cloudless all day, so a cloud does not make sense.

If this is steam, then lava has already made it well far up the main ridge which forms the “spine” of the island.   That spine has numerous remnants of old vents from prior eruptions, and is directly connected to and above, the unstable land mass that scientists fear will slide into the Atlantic, creating a tsunami.

We are awaiting clarification of this is steam or a cloud.