Your Feel-Good Video of the Day: Pushing back Against Woke Corporations 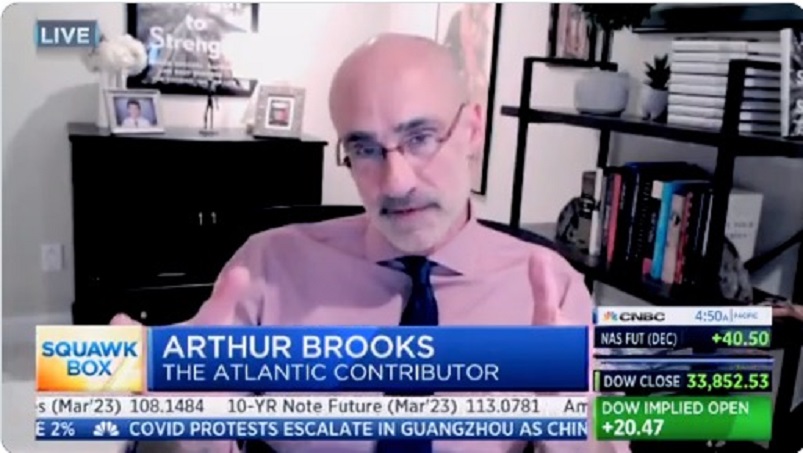 One of the things we reliably expect from Harvard professors nowadays is that they’re as intellectually bereft as people like Elizabeth Warren, a mediocre leftist law professor who got her gig by falsely claiming to be Native American. Aside from being a leftist, her ideas are just wrong (as, for example, her claim that Biden can magically erase voluntarily incurred student debt.) But there are still sane minds at Harvard, one of whom is Arthur Brooks. Every normal person watching his short “man up” speech to corporate leaders, will find it incredibly refreshing and even worth a few Huzzahs!

Lately, I’ve noticed a despairing tone in conversations with conservatives. It’s not just gamed elections, open borders, a decaying military, attacks on fossil fuel (the foundation for modern life), the martyrdom of the January 6 prisoners, the transgender mafia’s bullying, continued vaccination pressures, or any of the other horrors the left is inflicting on America. What has left them despairing to the point of inertia is the sense that there are no battles that they can fight because the leftist victory is total.

A large portion of that sense of defeat comes about because we’re no longer just fighting at the political level. We’re not even fighting Hollywood and the TV news anymore. What’s really terrifying is that America’s major corporations have gone completely woke. The examples are everywhere, from Disney to airlines telling their flight attendants that it’s fine to be a bearded man with make-up and a dress, to the myriad corporations that have bought into Critical Race Theory, to the tech tyrants and their biased search engines and free-speech crackdowns. We’re tired and feel that it’s just impossible to fight both city hall and main street.

Arthur Brooks, a business and leadership professor at Harvard, as well as a well-known author and speaker, thinks we can fight Main Street because it’s not the monolithic leftist bastion we believe it’s become. Instead, he argues, in short, well-reasoned, amusing terms, that it’s up to corporations to stop pandering to their loud, woke employees. They may be squeaky, even shrieky wheels, but they are such a small group of people that they shouldn’t be getting any grease:

I suggest sending the video to any corporations you fear are yielding to the urgings of a group that’s not just a minority but a very small minority, with ideas that will destroy the corporation’s product and bottom line.