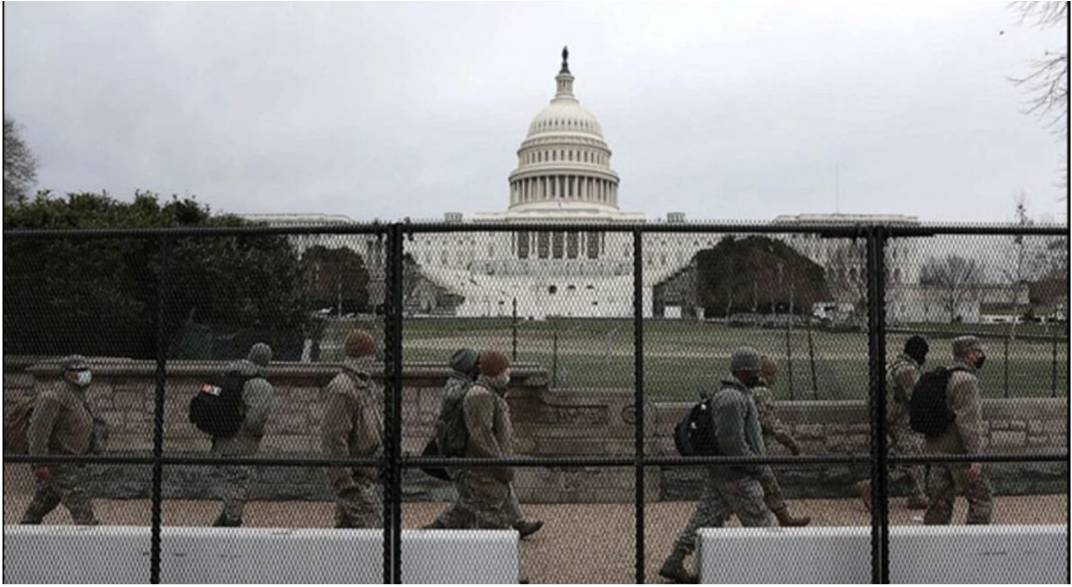 Our nation’s capitol is likely destined to look like “The Hunger Games” for a lot longer.

Yes, they’re removing razor wire, but if you think that’s the end of the “siege,” you’re sadly mistaken.

Dems have plans for more security at the Capitol.

After all, they can’t let the country think that they’re safe from the evil, scary Trump supporters who supposedly want to overthrow the capitol.

That’s the message that Dems are sending, with all of this security pomp and circumstance.

According to Bloomberg, Congressional leaders are now putting together a $2 billion dollar funding bill for that permanent retractable fencing around the Capitol, more officers for the Capitol Police, improved weaponry and emergency communications, as well as other “enhance[d] protections for lawmakers.”

CNN is reporting it as:

A permanent fence around the Capitol, hundreds of new security personnel — either the National Guard or a military police presence — and new authorities for the District of Columbia’s National Guard to be dispatched in emergency situations, one of the sources said. The plan under consideration also would expand the US Capitol Police force, potentially by hiring hundreds more officers, and make changes to the USCP’s board.

All of this subject to change as it’s still in discussion and according to Bloomberg might even involve more money.

Some of the recommendations are coming from the review by retired general Russel Honore who was hired without consultation with the Republicans by House Speaker Nancy Pelosi (D-CA) to look into what happened on Jan. 6.

Lawmakers in both parties have raised objections this month to an extended deployment of National Guard troops at the Capitol and the prospect of the razor-wire fencing surrounding the complex remaining up indefinitely. The acting House sergeant at arms said this week that a reduction of Guard troops would begin and some of the fencing would come down.

As of now, Republicans are not on board with this.

They’re still nagging at Dems over price and pointing out how the hypocrisy about how they suddenly love “walls.”

By the way, Dems don’t care if you call them a hypocrite…they really don’t.

One thing I’m starting to notice around here, the Democrats actually do love walls, and they do love fencing—to protect them.

But when it comes to our border, they don’t want any protection. Let’s take down these walls in D.C. and relocate them to our Southern Border. pic.twitter.com/9ShbecETD1

A decision on all of this new and ongoing security will come by next month.

But I guarantee you, the Capitol will continue to look like a scene out of “Mad Max” for Joe’s entire “presidency.”