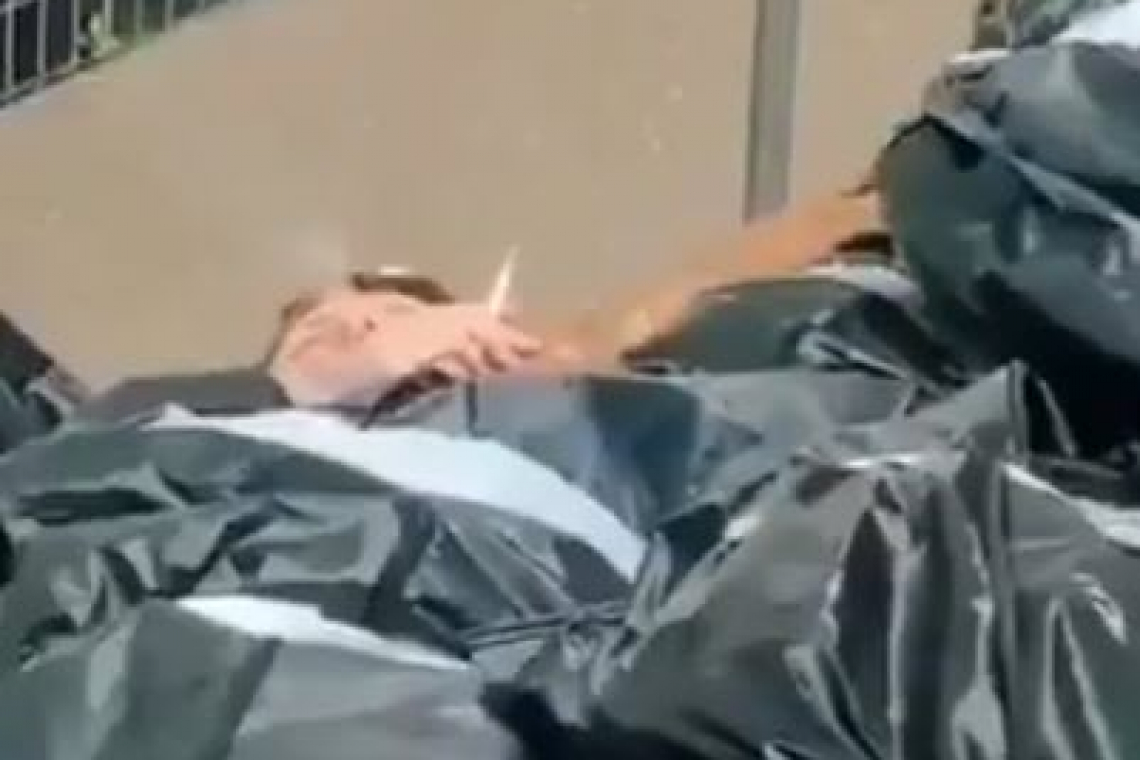 Folks, they’ve been caught!   The video below shows stage hands arranging “Dead” bodies to be used for imagery in the future to claim more COVID Deaths . . . .

It might have worked except we got this video showing the propaganda being set up and one of the “Dead” bodies, is smoking a cigarette!!!!

So now, when you’re shown pictures or video of “piles of dead bodies” from some new “Mutation” . . . you KNOW that you’re being lied to.

Not only are production companies being paid by government to create phony scenes of piles of dead COVID “victims” they’re even being paid to video phony footage for NEWS stories.

Below, one production company is shown making “crisis” footage of alleged “COVID PATIENTS” that is 100% fraud: done on a sound stage with all actors, none of whom is actually sick with COVID!  Here, look:

This entire COVID thing has been a massive scam.

Yes, there __ IS __ a new virus from China that gets people sick and YES, some people die from it.

But it is no worse than a nasty flu season.

There was never any reason to wear masks.

There was never any reason to shut down businesses.

There was never any reason to demand people stay locked in their homes.

This whole “pandemic” is actually a scam-demic.

We’ve been lied to for over a year.  This has been DELIBERATE FRAUD.

Our finances and life savings have been severely impacted; family-owned businesses have been destroyed, some of us have been personally financially RUINED.

. . . and for what?  Well, it turns out, there actually __is__ a reason; restructuring humanity through a “Great Reset.”

Some tyrannical leftists, who think they know what’s best for the rest of us want to impose a new system of life on all of humanity. They want all humans to be exactly equal.

Now, of course, that’s not possible because people are not all equal.  But the leftists don’t deal in reality, they live in their own little fantasy world.

Realizing they could never “sell” their vision of a restructured humanity to the general population, they decided they would have to DECEIVE all of us, ruin us financially, then offer their “solutions” to the troubles:

In other words worldwide Communism – where THEY control every aspect of our lives including how much money we get.

They decide if the house you paid for all your life, will remain yours, or be given to some needy family.

They decide if the new vehicle you’ve paid for over seven years will remain yours or be used somewhere else.

They decide if you get to eat steak, or have to eat soylent green human remains, gross veggie-burgers, or even grass . . . for fiber in the diet.

All because they think they know better and they intend to impose it on us whether we want it or not.

You see, the radical left thinks that it is “unfair” that some people live lives of comfort and luxury while others don’t.  They want everything equal.

The left never bothers to look at what a person did or does to earn more money than others, to them “We’re all equal.”  It’s a childish fantasy that has no basis in reality.

The simple fact is that PEOPLE are not equal.  Some are really smart; others really stupid.  Not merely ignorant, actually stupid.

Some people are self-starters; they get up and do things on their own.  Others are so lazy it’s tough to even get them out of bed.

Some people are strivers; they work harder, smarter, faster, and better . . .  while others could give a crap less if they even do _any_ work, never mind good work.

To leftists, everything HAS to be “equal” and what that means in reality, is that every is equally miserable.

Therein lies the problem for the left: People like me and you who say “no thanks.”   The Left won’t take “no” for an answer.  They demand that THEIR version of Humanity be the ONLY version.

Hence, their need, and now actual effort, to literally destroy us all, so as to impose THEIR version of humanity upon all of us.

They WANT you to be financially broken.  They WANT you to exhaust all your personal credit.  They WANT your business to go under . . . so they can come in, offer to discharge ALL your debt and give you a Universal Basic Income, in return for you agreeing to give up your right to EVER own private property — and taking routine updates to their genetic “vaccines.”

Now, as one might expect, their version of Utopia will be anything BUT.  When people realize they’ve actually become human cattle, to be fed, watered, housed and managed by some leftie bureaucrat, they will rebel.  Complaints will start being uttered.

Those who complain will see first hand, the “tolerance” of the left: If you complain about their new Utopia . . . your Universal Basic Income might not arrive. Oh, gee.  You have no money this month?  You should have kept your mouth shut.  Don’t complain.

Or maybe they tell you to move out of what is now THEIR house, and go live in some roach infested housing project instead of the house you live in. Oh, gee, your new house is rotting, falling down, and infested with roaches, mice, and rats?  You should have kept your mouth shut. But at least you still have free housing!

This is the reality that these sick, tyrannical, psychotics who are left-wingers, have in mind for all of us.

Let’s not forget they’re already talking about a “vaccine passport” so you can “return to normal.”  No passport? Gee, too bad. You can’t go out shopping – not even to buy food . . . . because THEY say so.

They are so sick, such absolute control freaks, they demand people accept EXPERIMENTAL GENE THERAPY into their bodies for a virus that has a 99.4% survival rate!   And if you don’t want to take their experimental genetic modifications, they want to lock you away from the entire world.  They’ll call you “dangerous” because you’re unvaccinated.

These people are demented, evil, psychotics. They envy what you worked for, want it for themselves, but either aren’t willing to work for it – like you did – or aren’t smart-enough, motivated enough, talented enough, or self-disciplined enough, to earn it themselves.

They exist on jealousy, envy, and covetousness.  They want what you got. Period.

Since they won’t stop on their own, sooner or later, they’re going to have to BE stopped.

So prepare yourselves mentally and physically for what’s coming.  Because as evidenced by the video above, these leftists will stop at nothing to achieve their sick, evil, goals.

When it comes time to stop them, things will probably get ugly for awhile as these people are stopped.

Sadly, it will be a necessary thing to preserve human liberty and freedom.