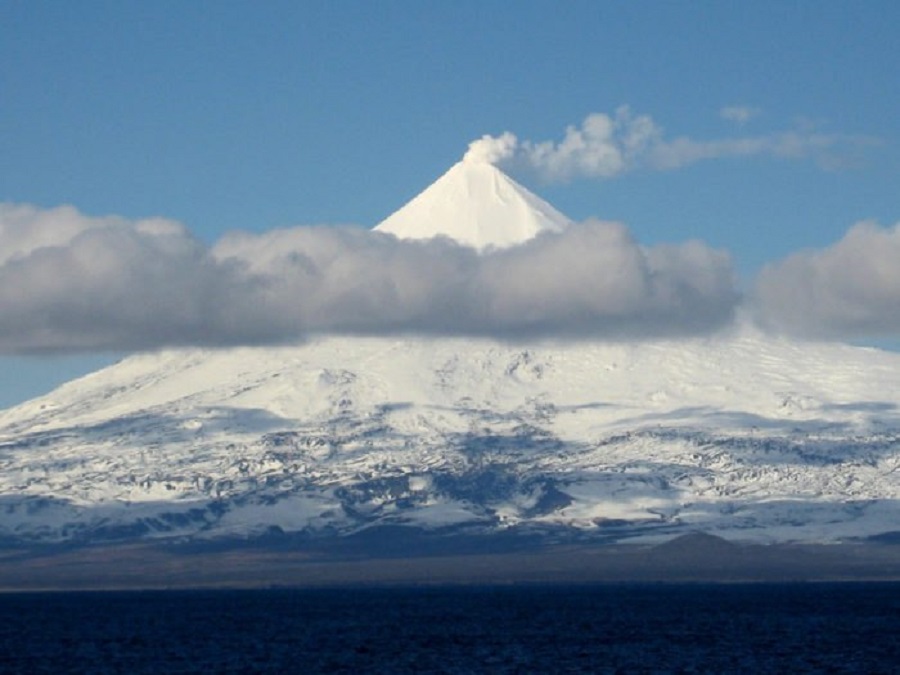 Alaska is a land of natural surprises, from earthquakes to avalanches you never know what the extreme conditions will bring. But few realize there is an active volcano in Alaska! To be accurate, there are several active volcanoes in the Aleutian chain, the highest of which is…

Shishaldin Volcano, an active volcano, lies in the southwest corner of Alaska.

The volcano is in the Aleutian Islands, an island chain that trails from Southwest Alaska into the Pacific Ocean.

This view from space shows that Shishaldin is the largest volcano on Unimak Island.

Shishaldin shares the island with Isanotski, and Roundtop Volcanoes, seen here from the Pacific side of Unimak Island.

The three volcanoes lie lined up in a row, each formed as the tectonic plate passed over a hot spot in the earth’c crust.

The view from the top of the volcano to the Northwest.

The summit crater is about 500 meters across and a steady plume of steam rises from it.

The volcano lies in the Alaska Maritime National Wildlife Refuge.

It is the most symmetrical cone-shaped glacier-covered mountain on the planet.

Standing tall and proud throughout the ages, the Aleuts name for the volcano Sisquk, meaning “mountain which points the way when I am lost.”

This photo of the volcano in 1910 was taken by a crew member on a mail boat delivering to the islands. Surprising that is has stayed largely the same as it has been active the entire time.

Shishaldin Volcano has been had confirmed eruptions since the 18th century and reports of activity are ongoing, making it the most active volcano in Alaska. If you ever get to the Aleutians, you won’t want to miss this wonder of Alaska.

You’ll be amazed that this volcano is still alive and building new parts of Alaska as we speak.

The Aleutian chain has a unique wonder and those who make the epic journey will be well rewarded with the sight of the active volcanoes in the area.