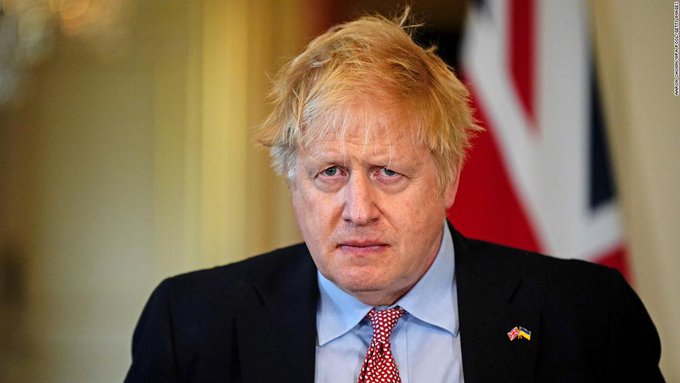 The Prime Minister of the United Kingdom, Boris Johnson, said Sunday “Military aid to Ukraine is no longer enough to defend it.”

Ever anxious to exercise AMERICAN military might, and shed AMERICAN Blood, this is the “go” signal to other NATO members that the UK wants a military intervention with troops into Ukraine; which will result in literal World War 3 with Russia.

I get tired repeating that this war is NOT just about Ukraine.

Russia prepared for this war since 2014 when the EU and USA overthrew the Ukraine government and installed a puppet government there. NATO has been preparing as well.

Ukraine is just the first step. Ukraine as a NATO member or under NATO control, is important because it gives NATO a massive opportunity to strike Russia without exposing Western Europe, or at least this is what West is thinking.

Ukraine under Russian control is EXTREMELY important for Russia, because it is a huge buffer against NATO.

Two of the Baltic states that are NATO and border Russia are INSIGNIFICANT, so the argument that NATO already borders Russia is null. Russia can overrun them in 24 hours.

It is a war of survival for Russia, and a war of expansion for the West, aiming at dismantling Russia and stealing its resources, just like Iraq, Libya, Syria, and ~20 other countries the West invaded in the last 70 years.

Who is going to win this war? The big one, not the Ukraine war?

Whether we like it or not, WW3 is imminent, and will be nuclear.

Slowly, but surely, those of us who argued that this war was clearly in the making for a long time, are proven right.

There is no way in hell that NATO and Russia “just” happen to be on a collision course after a few months.

There is no way in hell that Russia just decided to invade Ukraine, without knowing that NATO will intervene.

There is no way in hell that both NATO and Russia did not know, since the 2008 Bucharest Summit, that war is going to be inevitable, and both sides prepared since at least that point in time.

I don’t want to see war except in documentaries. I live extremely close to an area that will see WW3 . . . New York City.  And even if this WW3 will not affect the entire world, or the entire Europe, it will 100% affect where my house is.

The U.K. is ALWAYS saying first what the U.S. will say later.   So when Boris Johnson said today “Military aid to Ukraine is no longer enough to defend it” that’s the gigantic balloon going up.

Americans would do well to remember that we threw-off the King of England because he and his minions were despicable, lying, cheating, thieving, people who did great harm to us.

They never got over us breaking away and never forgave us for daring to do so.

Britain wants HARM to come to the United States because Britain is a little country, with a little economy, and a little military that can’t do much of anything anymore.  But with America and Russia GONE, Britain would once have the ability to create a British Empire.

Britain wants us all dead so their little, insignificant country can rise in world stature again.

But Britain can’t defeat us, politically, economically, or militarily.   In addition, Britain cannot defeat Russia.  Soooooo, Britain is trying to get America and Russia to fight each other, and KILL EACH OTHER, so we’re all out of its way.

The advice and desires of Boris Johnson and the United Kingdom should be viewed by Americans as the deadliest of snake venom.

I had hoped that this war could be avoided, and still hope…but once the U.S. began deploying the omen of war in the area (A-10 jets), which arrived in Norway this weekend as seen in photos below, my hopes diminished to an absolute zero.

Four A-10’s arrived in Norway. Six others flew to North Macedonia on May 7th.

I spoke to a US military contact Sunday afternoon and he told me directly:

“Russia has a very large and effective fleet of nuclear submarines that lie off the coast of the U.S. They have a great number of nuclear-tipped missiles that can evade any defenses we have. If there were a nuclear war, all of northern Virginia would be essentially annihilated.”

“…you have the Norfolk Naval Shipyard, you have the Port of Norfolk. You have the greatest accumulation of naval power on the face of the Earth. This is where we park all of our aircraft carriers, our nuclear submarines, all of those things. There would be nothing remaining.”

I would be on guard for anything within the next 24 hrs.

It doesn’t make sense why Trudeau and his ministers would be in Ukraine, along with Pelosi, Jill Biden, …Bono…

Add this to the pope saying Russia assured him it would end today, and the fact of Russia holding a parade.

The parade strikes me as a ruse.

Putin is moving his troops from Syria, and with Boris Johnson’s comment things are extremely tense right now.

It has a feeling that something is being built up to. A-10 warthogs brought in, and the only way they can be piloted is having the crews who are assigned to them and know the aircraft.  U.S. crews.

I think NATO joins in the war VERY VERY soon!

It may be a matter of hours or days, but it looks like that’s what is going to happen.

Russian State Duma Speaker: “The declaration of the G7 not to allow Russia to achieve victory in Ukraine is evidence of the success of our military operation. Russia has smashed NATO’s plans to expand eastward.”

The president of the Russian Space Agency just said, “If there is a nuclear war, we will wipe out NATO countries from the world in 30 minutes.”

According to the Social Media Post below, Russia is sending GENERAL MOBILIZATION NOTICES out TONIGHT!

Russia is reportedly transferring units from Syria to Ukraine. These Russian units will cede bases to Iran and Hezbollah. Israel will be on high alert.

ICING ON THE CAKE:

On a FINAL NOTE:

Look what the Pentagon announced today in the social media posting below . . . Who asked them? . . . . and WHY do they feel the need to say this??????

One thought on “Boris Johnson – “Military aid to Ukraine is no longer enough to defend it.””