Cop Begs Knife-Wielding Man In Standoff: ‘You Don’t Have To Die Today’ 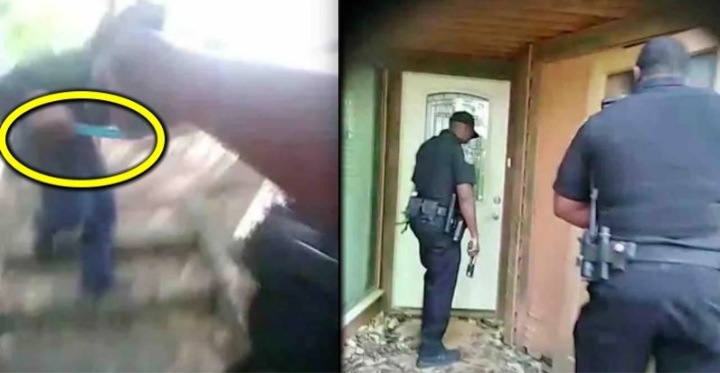 A frightening standoff between police and a knife-wielding man was captured on the officers’ bodycam footage. In addition to telling the suspect to drop his knife at least 47 times, a black officer pleaded with him as he issued a stark warning. Sadly, he didn’t listen, and the cops were forced to take action.

Matthew Williams, a 35-year-old Georgia man, encountered police on his property after officers were called to the house by a neighbor, who told them the home should be vacant. “Our neighbors that lived there moved out, and the owner has vacated the home to remodel it, so nobody is supposed to be there,” the woman was heard telling cops when they arrived at the scene.

Sadly, the female neighbor was mistaken, and it turned out Matthew Williams actually lived at the property, according to The Blaze. Unfortunately, rather than resolving the misunderstanding, things took a terrible turn when Williams decided to confront the police while armed with a knife on that fateful Wednesday, initiating a standoff that ended horribly.

Williams is then seen as he exits down an outside staircase, but rather than explaining the misunderstanding or communicating with the cops, he’s seen lunging at an officer with what they described as a blue ceramic knife. In response, an officer fired one shot, and Williams fled into the trees surrounding the house, police said.

A female officer is heard saying she may have shot Williams in the shoulder, but things are far from over as a standoff ensues. “Drop the knife, man!” an officer hollers into the woods as another also yells, “Drop the weapon! Drop it!” In all, police order Williams to drop his knife at least 47 times but to no avail.

“We will shoot, man, all right? We gave you ample warnings, all right?” one of the officers is heard telling Williams, who continues to illude them for over 10 minutes.

Again, rather than comply, Williams takes a bad situation and seemingly makes it worse as he slips out of view and back into the house, where officers continue to try to appeal to him through the closed front door. “Please come out for us, boss man. What’s the problem? How can I help you?” an officer who identified himself as Sgt. Perry with the DeKalb Police Department asks.

After another minute, an officer kicks in the door, but it quickly closes from inside. “I’m begging you,” the voice of the DeKalb County police sergeant is heard pleading with the knife-wielding man. “You’re a black man. I’m a black man. You don’t have to die today. I don’t want you to die today,” the sergeant begs in an exchange that lasts nearly two minutes.

Williams tells officers that he is defending his property, contradicting the claim of the neighbor who said he was a prowler, to which Perry responds by again telling Williams to drop the weapon. “Sir, I need you to put the knife down,” the sergeant says. “Let me see [the knife] drop,” he continues. “I can get you an ambulance out here. We can talk about this.”

After another minute, police say Williams lunged at the officers with the knife again right as one officer is heard saying, “We’re here to help you,” 11 Alive reported. Then, three gunshots rang out. As the door closed again, officers withdrew and waited for a SWAT team. Over an hour later, Williams’ body was recovered from the premises, having been fatally shot by the police.

With it later being learned that Matthew Williams lived in the house and that the information that was relayed to officers was wrong, DeKalb County Police found themselves on the receiving end of criticism. As Williams’ family raised concerns about how the incident was handled, the bodycam footage was released, showing the tragedy as it played out.

Matthew Williams’ family has since indicated that they believe he was experiencing a mental health episode at the time of the incident. Of course, there was no way for officers responding to the 911 call to know this at the time. The only thing they had to go on was the flawed information relayed in the 911 call and by the neighbor — and the fact that a man with a knife was lunging at them — which DeKalb County Police Chief Mirtha Ramos pointed out:

“The police will respond to what they know at that moment,” Chief Ramos explained after learning that Matthew Williams lived in the house where he was fatally shot by police, although they didn’t know that at the time of the 911 call. “And we don’t know what they knew at that moment besides what we see on the bodycam footage.”

A man was killed by police in his own home. While this sounds like a miscarriage of justice, we have to ask ourselves how we expect law enforcement to react when their lives are threatened. When a man comes at you with a knife, most would defend themselves. These officers pleaded at length, doing everything they could at that moment to avoid the tragic outcome that came to fruition. It’s obvious this wasn’t the ending the officers wanted, but they were forced to respond to the situation at hand. Sadly, just because a shooting is justified does not mean it isn’t tragic, and that’s what many often forget. Our prayers are with Williams’ family and the officers as well.