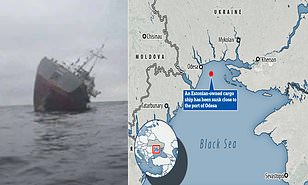 Four crew members are missing and two are in a lifeboat after the explosion.

Authorities believe the cargo ship hit a landmine in the Black Sea near Odessa
Ukraine had accused Russia of using civilian ships as human shields.

An Estonian-owned cargo ship has been sunk off the coast of Ukraine following an explosion.

The Helt is believed to have hit a mine and four crew members are still missing.

Two others are in a life raft at sea after the blast near Odessa according to Igor Ilves, managing director of Tallinn-based manager Vista Shipping Agency.

Estonia is a member of NATO and the EU, and while an official reason has yet to be given for the blast, the possibility that it was the result of a mine risks further destabilising an already explosive situation in Eastern Europe.

Ukraine’s armed forces said: ‘For the safety of civil navigation, the Navy of the Armed Forces of Ukraine closed navigation in the north-western part of the Black Sea.

‘At the same time, the Russian Black Sea Fleet continues the tactics of Russian ground forces trying to hide behind civilian lives.’

It comes just a day after a Bangladeshi-owned cargo ship was struck by a missile or bomb in the Black Sea port of Olvia, killing one of its crew members.