Man In Military Fatigues Flattens Man With Haymaker, Sits On His Chest 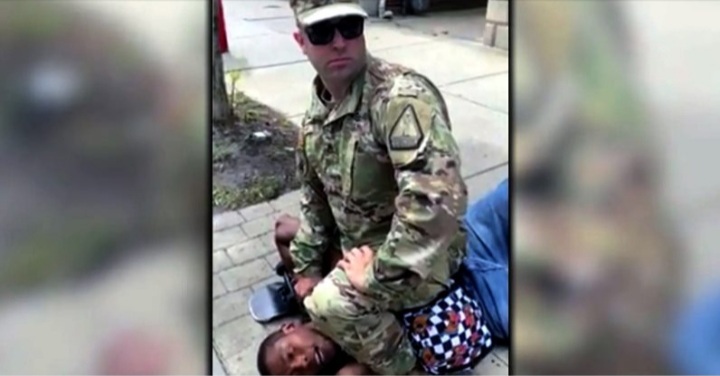 A man in military fatigues was captured on camera, flattening a black man with a haymaker and then sitting on his chest. The footage quickly went viral as some claimed the military-dressed man went too far, but others say he was just giving the other guy what he deserved after what he did.

Said Hamideh was along Elmwood Avenue, in Buffalo, New York on a Thursday when he witnessed a black man, who Hamideh believed to be mentally ill, walking towards a white man dressed in military fatigues and lunging toward him, according to the Daily Mail. Hamideh captured what happened next on video, and the footage quickly went viral.

According to Hamideh, the unnamed black man reportedly spat on the white man’s car and “made disparaging remarks about the military,” The Blaze reported. Not taking too kindly to the black man’s remarks, the white man hit him in the face with a haymaker of a punch, forcing the black man to the ground. He then sat on the black man’s chest to restrain him as an angry crowd gathered.

After dropping the suspect to the ground, the man in the military fatigues is seen sitting on the black man’s chest, waiting for officers with the Buffalo Police Department to arrive. He’s heard yelling for bystanders to call authorities as onlookers rush to the scene. Rather than help, however, they demand the white man get off the black man’s chest.

“Get the f*** off of me,” the black man can be heard demanding while at least one bystander is heard hysterically asking the man in the military fatigues if he’s a “white supremacist.” However, not everyone watching was ready to make this a skin color issue.

A crowd begins to form as the white man in military fatigues sits on the black man’s chest. (Photo Credit: Screenshot)

“This isn’t about race! Don’t make it about race,” a second bystander counters before explaining that the black man had been causing problems on the Buffalo street long before he picked a fight with the white man. “You do not know what’s been happening all day. At least understand the facts before you open your mouth. You have no business here, back away.”

At one point, the black man is heard telling bystanders that he can breathe. “Oh yeah, man, I’m good,” he reassures onlookers before adding, “I’ve been waiting for this.”

“Are you hitting people? Are you hitting our people?” asks a black man in a wheelchair, who rolled up to the white man as he restrained the suspect. Holding a baseball bat, he then accuses the man of racism, but the soldier isn’t having it.

“Oh, yeah. I hit him,” the white man admits before insisting it had nothing to do with the color of the other man’s skin. “I see a man as a man. He’s yelling and shouting at people in the street, then he comes over and spits on my car. Then, he turned around on me. I’m not going to let him hit me first, man.”

When officers arrive at the scene, the white man immediately stops restraining the black suspect, allowing police to take over, bringing the video to a close. It’s unclear if any arrests were made in connection to the incident, but Captain Jeff Rinaldo of the Buffalo Police Department told The Blaze that the incident was under investigation.

While it’s difficult to determine whether an incident is justified without all the evidence and only based on a brief clip of an encounter, if the witness’s story is true, the man in the military fatigues deserves a thank-you. Being spit on subjects the victim to bodily fluid exposure, and it is a form of assault that shouldn’t be tolerated in a civilized society. If this man was randomly harassing and assaulting strangers in the street, it sounds like the soldier did the community a favor.