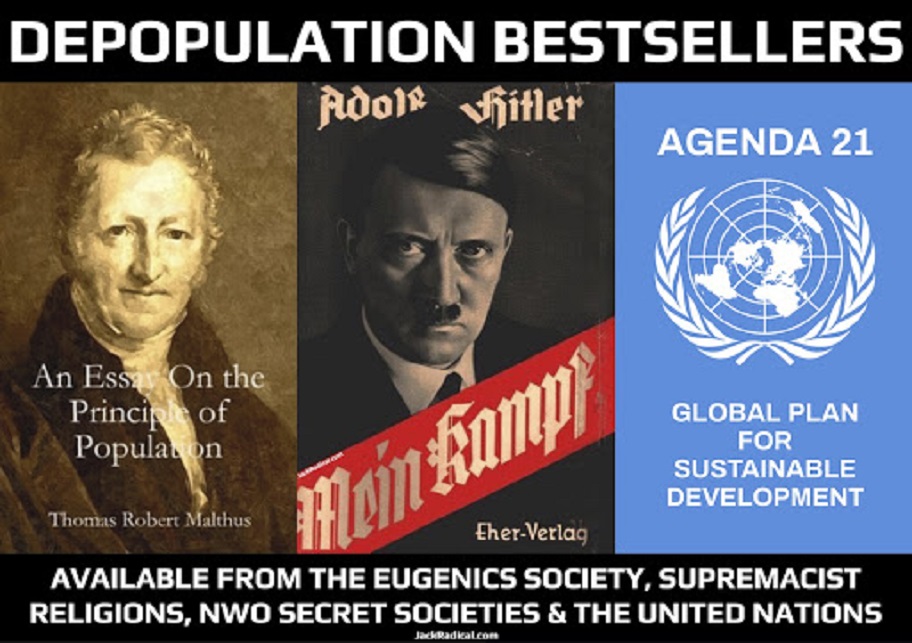 The COVID HOAX was never about the “virus”, which never even existed; it was always about frightening goyim-gentiles into taking the Zionist COVID-Lethal-Injection (ZCLI).

(Disclaimer– This plan can be termed Communist, Satanist, Cabalist, Masonic as well as Zionist.)

In 2020, Karl Schwab stated that a “cyber-attack” will soon happen that will cause the entire internet of the world to go dark, and also shut down the food-supply chain, electricity, water, and furthermore that this would bring “total chaos” to the whole world, especially to “advanced” countries and cities of the West. Max Igan sees this happening in July.

Some Elementary Steps In Zionist UN Agenda 2030 For Quickly Culling The “Useless Eaters”In 2011-19, the “Great Zionist Prophet” Klaus Schwab of the Zionist World Economic Forum made several public statements to the effect that a “pandemic” will soon befall humanity. Properly, a “pandemic” is when 5 percent of the world’s population dies, like the Black Death or the 1918-21 “Spanish” Influenza, the latter having been probably caused by a Zionist bioweapon injected into troops at Fort Riley Kansas;

In Oct 2019, in keeping with Schwab’s “prediction,” Zionist vaccine-genocider Bill “McKill” Gates and his “husband” Mel teamed up with Johns-Hopkins-University and the Zionist World Economic Forum to run Operation Event 201 in NYC to simulate a “pandemic” of a “virus” which the operation had the “coincidental” foresight to call “Coronavirus”. Further “coincidental” foresight is evident from the fact that the web addresses VACCINEPASSPORT.INFO, VACCINEPASSPORT.NET, VACCINEPASSPORT.ORG and VACCINEPASSPORT.COM were all registered on 17 Jul 2016. The Oct 2019 “training exercise” was a signal that the “Go Live” stage was now close for Operation COVID HOAX;

The Zionists launched Operation COVID HOAX on 11 Mar 2020, but this operation was originally based on the Rockefeller Lock Step document from 2010. That document was so-titled because the Zionist B’NAI B’RITH lodge (which gives its daily orders to worldwide Freemasonry) wanted all the world’s goose-stepping Zionist Freemasons (the puppeticians and public-serpents of your country) to act in lock-step toward their aim of genociding many goyim-gentiles.

The COVID HOAX was never about the “virus”, which never even existed; it was always about frightening goyim-gentiles into taking the Zionist COVID-Lethal-Injection (ZCLI). The Modus Operandi, or how the Zionist COVID-Lethal-Injection (ZCLI) sterilizes and kills its victims, is by entering the bloodstream, then circulating spike-proteins throughout the body, which attack the ovaries, the liver, the neurological tissues and the main organs of the body.

Recipients have no legal recourse for this since the Zionist puppeticians indemnified the manufacturers for sterilizing or killing them by pointing out that, in receiving a “COVID Jab”, all recipients agreed to “willingly take part in a medical experiment” (something which may henceforth invalidate a victim’s life insurance and health insurance). The Zionists always ensure minimum financial loss to them whenever they cull goyim-gentiles. In the past, the Zionists actually made a profit off of most of the genocides they ran;

Next, in 2020, Schwab stated that a “cyber-attack” will soon happen that will cause the entire internet of the world to go dark, and also shut down the food-supply chain, electricity, water, and furthermore that this would bring “total chaos” to the whole world, especially to “advanced” countries and cities of the West.

How can you survive on the 25th floor of a NYC skyscraper if an extended blackout kills the plumbing, elevators, heating, lights? Speaking in his usual Bond Villain voice, Galactic Emperor Klaus Schwab decreed: “The COVID crisis would be seen in this respect as a small disturbance in comparison to a major CYBER-ATTACK”;

In Jul 2021, Operation Cyber Polygon will take place that will simulate the entire internet of the world going dark after being “attacked” by Zionist-sponsored “terrorists” (e.g. by Zionist ISIS or Zionist Al-Qaeda), also causing the food-supply chain, electricity, water to shut down (in the simulation). Because of the phenomenal track record of the “Great Zionist Prophet” Klaus Schwab, this Jul 2021 “training exercise” is now the signal that the “Go Live” stage for Operation CYBER-ATTACK may be coming very soon;

So, Max Igan and many other truthful truthers now believe that the Zionists are about to pull a real internet shutdown in the winter of 2021-22 so as to cause mass chaos for the goyim-gentiles as part of culling them as commanded by Zionism’s “holy” books (Talmud, Kabbalah, Zohar, “Protocols”).

Igan & Co say the internet shutdown, utility shortages and food shortages may last much longer than 6 months, perhaps until 2023-24. In this time too, the Zionists are likely to murder many of their enemies, as they did in Bolshevik-Zionist Russia 100 years ago. In this time too, the Zionists will be able to perpetrate major genocides that they can easily keep “quiet” since the alternative media will also be unavailable during the staged blackout;

In the official promotional video that the WEF launched to accompany Operation Cyber Polygon, pinstripe-terrorist Tony Blair, who is a top Zionist Freemason, stated: “It is just a statement of the obvious that you need to ‘protect’ people properly”. Here, Blair meant exactly the same kind of “protection” the Bolshevik-Zionist state gave to the goyim-gentiles of Ukraine in 1932-33, when the Zionist Holodomor of 1932-33 starved 10 million Ukrainians. It was led by Kabbalist Jew Lazar Kaganovich and was greatly aided by the Zionist New York Times which completely covered it up.

All this means that people might be wise to consider leaving dangerous cities where others might rob their food supplies, moving to a rural place where less harm might come to them, or simply stocking up with extra food, extra fuel, generators, stoves etc. for extended outages of electricity, water, energy.

The Zionists and their lackeys within Zionist Freemasonry are currently preparing WW3 and their writings have long announced the culling of the goyim-gentiles after first moving them to a “post-industrial, post-consumer, and post-human [sic] society”. Also, planned austerity is not unprecedented, since they launched the Great Depression just prior to WW2. If you believe that the Zionists do not mean business, then read proper history books that prove that the Zionists and their Masonic lackeys launched the Russian “revolution”, WW1, WW2, Korean War, Vietnam War, both Gulf Wars and the Zionist wars of 2001-21, in order to fulfill the exact same genocidal plans that are commanded by their “holy” books (Talmud, Kabbalah, Zohar, “Protocols”). These proper history books (e.g. by Professor Antony Sutton or EC Knuth) are freely available across the internet, meaning that ignorance these days is either down to laziness or else a conscious choice. No one knows the future, so non-lazy people might yet foil these plans.