The consequences of a stolen election spell imminent danger for America 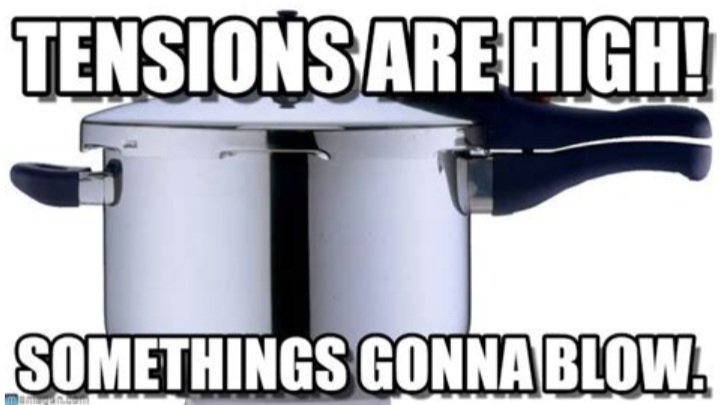 Anybody with two working brain cells to rub together knows that the November 2020 elections were stolen.  There is no doubt in my mind that the Biden administration is illegitimate, and the Democratic Party’s control over the Senate is illegitimate, as a result of electoral fraud.

The evidence of that is overwhelming.  In fact, it’s confirmed by the machinations of the Democratic Party and progressive political machine to prevent evidence of that fraud from being properly, honestly and effectively tested in court.  Just look at their efforts to stop or impede vote fraud investigations in Georgia, Arizona and elsewhere.  If there was no fire to be investigated, they wouldn’t be so frantically denying the existence of the all too visible smoke.

The trouble is, evil begets evil.  A stolen election has consequences.  Smaller crimes lead to greater crimes.  We’re seeing more and more of those consequences of crime becoming reality before our eyes right now.

We might withstand one of those pressures at a time.  We might even withstand two . . . but can our nation withstand all of them at once?  I doubt it.  That’s too much to handle, even for America.

I fear greatly that our nation is in imminent danger of at least the splintering, if not the complete collapse of our national unity.  If that happens, expect international chaos and anarchy while our stabilizing influence is removed, and our gaze turns inward to deal with our own problems.  Who knows where that could end up?  Who knows how the world will look after a few short years of such destructive free-for-all conflict?

We’re at a very dangerous point indeed.  Nobody knows what the short-term future will bring – but I have no doubt whatsoever that things are about to get worse.  Be on your guard, friends, make what preparations you can, and look for allies and support to help you withstand the enormous pressures that are about to be let loose.  The trouble with tipping points is, very often they tip.  I think this one is about to do so.  I expect serious trouble in a matter of months, and possibly within weeks.

I saw this coming several years ago;  it’s the principle reason I moved to where I live today, west of the Mississippi and away from major cities, which are the flashpoints of conflict in America today.  I note that a lot of people with a sense of the realities of the times are doing likewise.  Good for them.  Those of us in our right minds need to come together for mutual support and protection.

If you’re stuck in a conflict zone, or a city likely to become one, I can only recommend that you prepare as best you can.  This article and this one offer many helpful suggestions.  Prepare today, so you aren’t caught unawares and unprepared tomorrow.