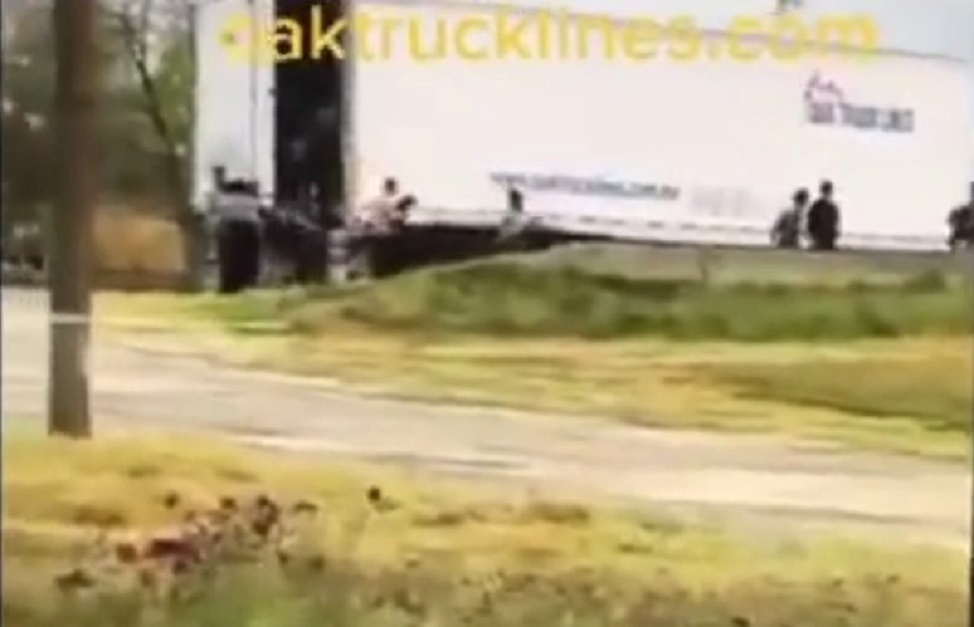 What the hell is going on?  A semi-trailer of illegal aliens unloading in Pearsall, Texas, was captured on video and it is going viral.

In the video, what appears to be 100 illegal aliens are being unloaded in the small Texas town 100 miles from the Mexican border.  Pearsall had a population of 9,240 up until this semi-trailer was unloaded.  The small city prides itself on being safe.

This video shows the total disregard for Americans that the Democrats and the Obama/Biden Administration have.  Everyone knows it is wrong to allow people to walk into your house or country without knowing who they are or what their purpose is.

🆘They’re still coming 🆘PEARSALL, Texas — Video sent to KENS 5 NEWS shows dozens of migrants pouring out of a trailer in Frio County. The Frio County Sheriff’s Office told KENS 5 the incident caught on video took place around noon Monday in Pearsall, near the intersection of Oak and Nueces streets.

According to the Pearsall Police Department, a person driving behind the truck saw arms and then someone’s head sticking outside of the truck’s small door. That witness called police.

Authorities said the driver fled along with the migrants and tried to blend in with group once authorities got there, but they were able to identify him as the driver and arrest him. They described the migrants as dehydrated and “soaked in sweat.”

In total, 65 migrants were apprehended. The driver of the truck was arrested and placed in federal custody; it is unclear what charges the driver will face at this time. Authorities did not elaborate on the whereabouts of the migrants.

Pearsall PD said they were getting 911 calls from local residents saying they were spotting migrants running through their yards well into the night.

This comes as Republican lawmakers blame the Biden administration’s border policy for a surge in migrants at the Texas-Mexico border. In a letter addressed to President Joe Biden Tuesday, Gov. Greg Abbott demanded answers to what he called a “humanitarian crisis at the southern border.”

Officials in south Texas also say they’re observing an increase in human-smuggling operations at the U.S.-Mexico border, which they say endangers those being transported.

This is a catastrophic disaster. Joe Biden told them to come and now they’re coming by the truck Load, literally.

Here is the video: