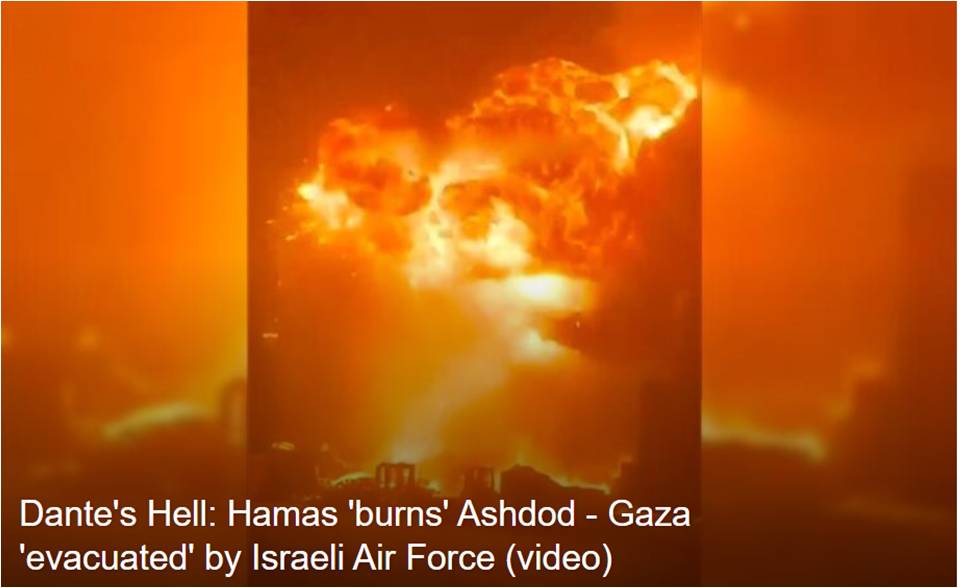 The Palestinians (Hamas) in Gaza and the Israelis in Ashdod also experienced real hell in Dante as the airstrikes and rocket fire of Qassam did not stop all night.

Buildings used as rocket launchers and their rooftops as launch sites for Israel.

Hamas once again fired hundreds of Qassam and a rocket hit the Israeli city of Ashdod and the power station.

IDF announces “this will not go unanswered”

Barrages of rockets are being fired non-stop from Gaza into southern Israel.

Tonight, a rocket hit the city of Ashdod—see the damage for yourself.

#BREAKING: #Israel Air Force destroyed first floors of a building named Al-Rawda 2 in #Gaza. Its residents had been informed before to evacuate. Therefore, the first floors of this building which are now destroyed were in use for stockpiling weapons by #Hamas or #PIJ. pic.twitter.com/qLLj9xgP7a

That’s how the “Al-Rawda 2” residential building can be seen now in #Gaza. It is partially destroyed by the #Israel Air Force. It is reported that three missiles were fired at the building. pic.twitter.com/Pp0GnMW4Uz

#Breaking | 7 Interceptions overall by Iron Dome over Sderot in southern Israel a few minutes ago. pic.twitter.com/ofhX8wxGSc

#BREAKING: Several rockets fired by #PIJ & #Hamas from #Gaza at #Ashdod in south of #Israel have caused damages to city infrastructures such as the power station. This video shows how power outage due to the rocket attack in the city minutes ago👇 pic.twitter.com/4HcmJCWFpu

Another Hamas rocket hit the city of Ashdod, a warehouse with flammable materials.

🔴 A number of Palestinian children were injured after being burned by the Israeli settlers in Jaffa city, at dawn today.#OccupiedPalestinepic.twitter.com/MGMwOG3s6y

🔴 The missile that fell inside a port #Ashdod, it hit a logistics warehouse containing highly flammable items.#OccupiedPalestinepic.twitter.com/LpgQwQc40k

H  Ashdod  (Arabic: Isntount, اشدود, Hebrew: אשדוד,  pronunciation ,  Asdod , ancient Greek:  nitrogen ) is the fifth largest city in Israel, located in the southern region of the country, on the Mediterranean coast, with a population of 207,000.

It is an important regional industrial center. The port of Ashdod is the largest port in the country for imported goods.